It has been a roller-coaster month so far for Son Heung-min but the Tottenham Hotspur forward reports for World Cup qualification duty against Lebanon in good form as South Korea seeks a return to winning ways.

South Korea drew 0-0 in an almost empty stadium in North Korea last month to stay atop Group H on goal difference in the second round of qualifying for the 2022 World Cup.

Only the top team in each of the eight groups and the four best second-place teams progress to the next stage of Asian qualifying. 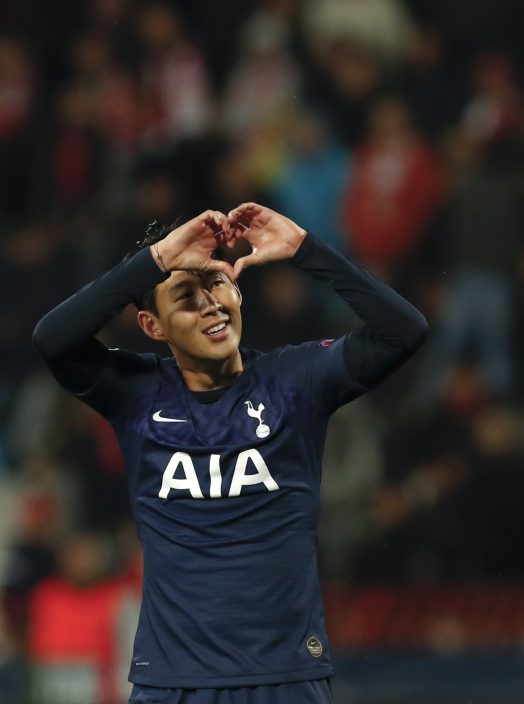 There had been concerns in Seoul that Son could arrive for Thursday's game in Beirut distracted by his involvement in a horrible ankle dislocation suffered by Andre Gomes in an English Premier League game against Everton on Nov. 3.

Son, shown a red card — later overturned on appeal — for his tackle, was visibly distressed and offered counselling by Tottenham. However, three goals in his subsequent two games — two against Red Star Belgrade in the UEFA Champions League and the other against Premier League rival Sheffield United last weekend — suggest that the 27-year-old Son is focused and on form.

"Son is looking good for his club, scoring in consecutive games and he is ready to show his quality against Lebanon," South Korea coach Paulo Bento said during the team's training camp in Abu Dhabi. "We are preparing well for what should be a tough game against a tough opponent. We know that we have to be focused against Lebanon."

The South Koreans, aiming for a 10th successive World Cup appearance, have not forgotten a humiliating loss in Beirut in 2011.

Australia also returns to the site of past painful defeats. Despite scoring 15 goals in their first three games on the road to Qatar, the Socceroos could slide off top spot in Group B if there is a third successive loss to Jordan.

Coach Graham Arnold, who in charge during Australia's loss to Jordan in January's Asian Cup, is expecting another difficult game in Amman as the Socceroos bid for a fifth successive World Cup appearance.

"We know what their strengths are, and we know what their weaknesses are," Arnold said. "We know that they'll sit deep in a block and we've been working on that for the last three camps on how to break that type of game down."

Asia's other three representatives at the 2018 World Cup are also on course to progress to the next stage of qualification, although Iran needs to bounce back from a loss last month to Bahrain that ended its unbeaten run in World Cup Asian qualifiers that stretched back to 2012.

Thursday's Group C match against Iraq has been made a little easier for Iran after FIFA insisted the game was switched from the southern city of Basra to a neutral country citing security concerns. It will take place in the Jordanian capital of Amman.

Saudi Arabia will go top of Group D if it wins in Uzbekistan while Japan, with three wins from three games and on course for a seventh successive World Cup appearance, can increase its control of Group F with victory in Kyrgyzstan.

2020 Watch: Will Trump lead by addition or subtraction?