Bolivians have new uncertainty to grapple with now that opposition Sen. Jeanine Añez declared herself interim president of the crisis-torn Andean country just hours after Evo Morales flew off to self-exile in Mexico.

Questions remained about who might rally around Añez, while Morales' supporters angrily accused her of trying to seize power in her declaration Tuesday, raising the prospect of more troubles following weeks of clashes over the disputed Oct. 20 presidential election.

Some people took to the streets cheering and waving national flags Tuesday night after Añez claimed the post of Senate leader, the position next in line for the presidency. Furious supporters of Morales responded by trying to force their way to the Congress building in La Paz yelling, "She must quit!" 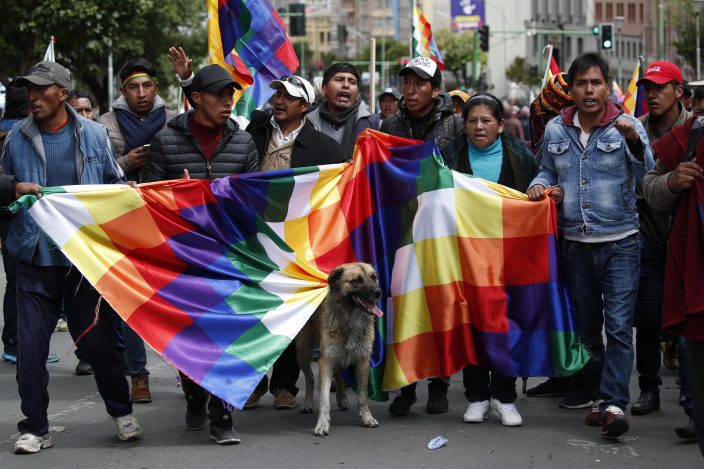 A dog stands with supporters of Bolivia's former President Evo Morales holding a "wiphala" flag that represents indigenous people during a march in La Paz, Bolivia, Tuesday, Nov. 12, 2019. Former President Evo Morales, who transformed Bolivia as its first indigenous president, flew to exile in Mexico on Tuesday after weeks of violent protests, leaving behind a confused power vacuum in the Andean nation. (AP PhotoNatacha Pisarenko)

Añez, a women's rights activist and former TV presenter, seemed in a tenuous position. She declared herself interim president even though she lacked a quorum in the Senate after Morales' party boycotted the session, and she wasn't sworn in by anyone before appearing on a balcony of the old presidential palace wearing the presidential sash.

"My commitment is to return democracy and tranquility to the country," she said. "They can never again steal our vote."

Morales resigned Sunday under pressure from Bolivia's military chief following the weeks of violent protests fed by allegations of electoral fraud in the Oct. 20 election, which he claimed to have won. 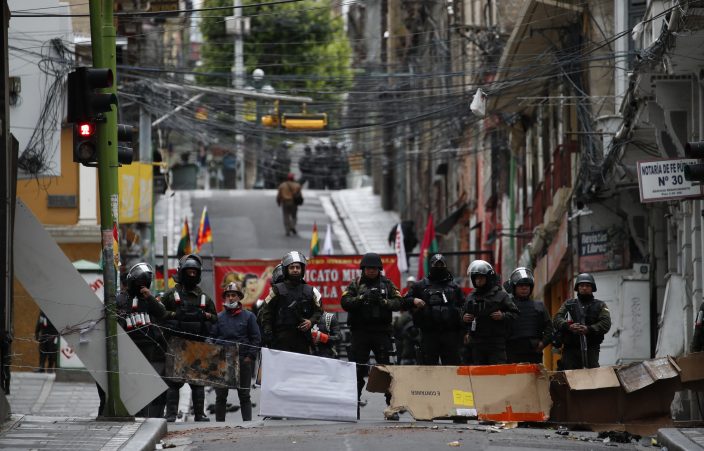 Security forces block access to Congress, amid protests in Paz, Bolivia, Tuesday, Nov. 12, 2019. Former President Evo Morales, who transformed Bolivia as its first indigenous president, flew to exile in Mexico on Tuesday after weeks of violent protests, leaving behind a confused power vacuum in the Andean nation. (AP PhotoNatacha Pisarenko)

Although Añez met with Gen. Williams Kaliman, the armed forces commander, it was uncertain how much support she could count on from other power centers.

Morales resigned shortly after an Organization of American States audit reported widespread irregularities in the vote count. Bolivia's first indigenous president arrived in Mexico on Tuesday under a grant of asylum. But his resignation still needed to be approved by both houses of Congress, and lawmakers could not assemble the numbers needed for formal sessions.

Añez forged ahead anyway, arguing that Bolivia could not wait and be left in a power vacuum. After Morales quit, resignations by allies left vacancies in the only posts listed by the constitution as presidential successors — the vice president, the head of the Senate and the leader of the lower house. 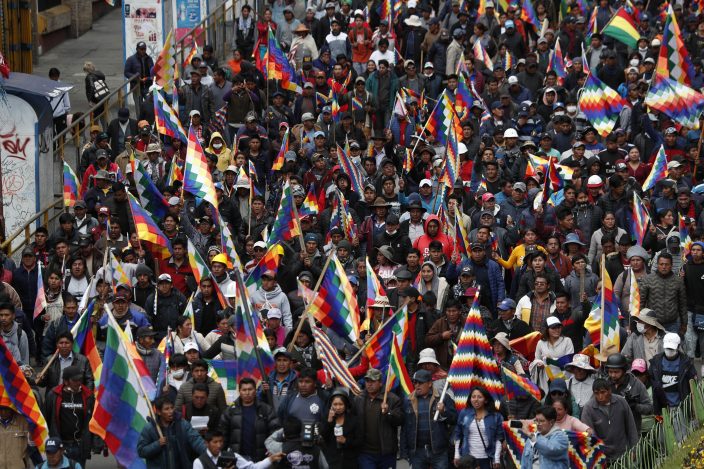 She immediately tried to set differences with the socialist leader. She greeted supporters at an old palace instead of the nearby modern 26-story presidential palace with a heliport that was built by Morales and that his foes had criticized as one of his excesses. She also carried a Bible, which had been banned by Morales from the presidential palace after he reformed the constitution and recognized the Andean earth deity Pachamama instead of the Roman Catholic Church.

Morales said on Twitter from Mexico that Añez's "self-proclamation" was an affront to constitutional government. "Bolivia is suffering an assault on the power of the people," he wrote.

Even before Añez acted, thousands of his supporters were in the streets of the capital in peaceful demonstrations clamoring for his return. Military fighter jets flew repeatedly over La Paz in a show of force that infuriated Morales loyalists who were blocked by police and soldiers from marching to the main square.

"We're not afraid!" shouted demonstrators, who believe Morales' departure was a coup d'etat and an act of discrimination against Bolivia's indigenous communities.

"Evo was like a father to me. We had a voice, we had rights," said Maria Apasa, who like Morales is a member of the Aymara indigenous group.

Morales' detractors accused him of becoming increasingly authoritarian and rigging the election.

Morales was met at Mexico City's airport by Foreign Secretary Marcelo Ebrard after a flight from Bolivia on a Mexican government plane and repeated his allegations he had been forced to resign by a coup.

"The president of Mexico saved my life," Morales said, thanking President Andrés Manuel López Obrador for granting him asylum. He vowed to "continue the struggle."

Ebrard said Mexican diplomats had to scramble to arrange a flight path for the plane because some nations initially closed airspace to it. The plane stopped in Paraguay to refuel.

Morales' departure was a dramatic fall for the one-time llama shepherd from the Bolivian highlands and former coca growers' union leader who as president helped lift millions out poverty, increased social rights and presided over stability and high economic growth in South America's poorest country.

In the end, his downfall was prompted by his insistence on holding onto power. He ran for a fourth term after refusing to accept the results of a referendum that upheld term limits for the president — restrictions thrown out by a top court that critics contend was stacked in his favor.

Gen. Kaliman, the chief of the armed forces, announced a joint police-military operation in a television address Monday seeking to calm street fighting. He said the hope was to "avoid bloodshed and mourning of the Bolivian family," and he urged Bolivians to help restore peace.

Ronald Arias said he had left his home in El Alto and walked for three hours to his job in downtown La Paz because the cable car connecting the cities was suspended for security reasons and barricades blocked access to public transportation.

Arias, a native Aymara, said that thanks to Morales, his parents in the countryside gained access for the first time to running water and gas for cooking.

"I was so saddened by his resignation," he said. "A lot of people in El Alto shed tears for the president."