Tomas Hertl scored and extended his point streak to four games on his 26th birthday, Evander Kane added his team-leading 11th goal of the season and the San Jose Sharks beat the Edmonton Oilers 6-3 on Tuesday night.

NHL points leader Leon Draisaitl had a goal and an assist, extending his points streak to 10 games, and Zack Kassian and Sam Gagner each added a goal for Pacific Division-leading Edmonton (12-6-2). The Sharks led early when Burns scored his fourth goal just under four minutes into the game on a powerful wrist shot from the top of the face-off circle that ricocheted into the goal off the top of the post.

The Sharks extended their lead to 2-0 when Kane scored off a rebound of a shot by Brenden Dillon just outside the crease.

Marleau redirected a shot by Tim Heed from just inside the blue line for his fourth goal midway through the second to give the Sharks a 3-0 lead. San Jose extended that lead when Goodrow scored at 1:26 of the second. Edmonton closed within 4-1 midway through the second on Draisaitl's 15th goal, a wrist shot from just inside the blue line.

Hertl scored his eighth goal late in the second. He has seven points (four goals, three assists) over his last four games.

Meier scored his fifth goal for San Jose midway through the third, and Gagner scored with just under eight minutes left, pulling Edmonton within 6-3. NOTES: Edmonton activated F Joakim Nygard off injured reserve. Nygard missed four weeks with a rib injury. . C Gagner was back in the lineup after being a healthy scratch the last two games. . C Connor McDavid had an assist on Kassian's goal to extend his point streak to five games. He has five goals and three assists over that stretch. . Edmonton is 3-5-1 when its opponent scores first. . Sharks D Dalton Prout was assigned to the San Jose Barracuda, the team's AHL affiliate, on a conditioning assignment. Prout hasn't played since suffering an upper body injury in the team's season opener on Oct. 2. 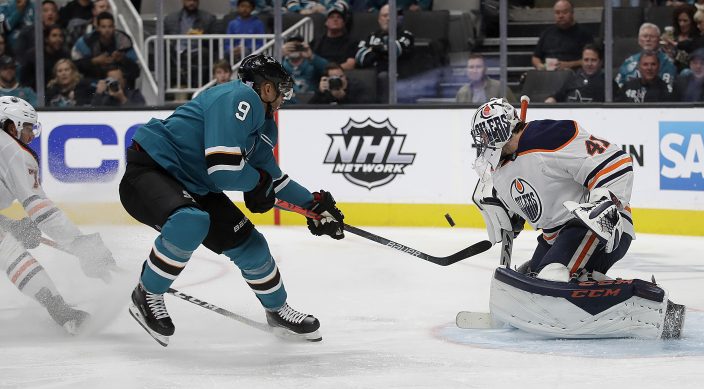 Sharks: At Anaheim Ducks on Thursday.

2020 Watch: Will Trump lead by addition or subtraction?

In an abrupt turnaround, President ...