The temperatures are plummeting and the days are getting shorter as another harsh winter approaches in Finland.

Expectations around the country's soccer team are rising, though, like never before.

On Friday, Finland could seal a place in the finals of a major soccer tournament for the first time in its history. All that's needed is a home win over Liechtenstein, one of the world's weakest teams, in Helsinki and the Finns will take their place in next year's European Championship.

FILE - In this file photo dated Friday, Oct. 12, 2018, Finland soccer fans react during the UEFA Nations League soccer match against Estonia at the A. Le Coq Arena stadium in Tallinn, Estonia. After more than 80-years of trying, Finland soccer fans have something to celebrate if they seal a place in the finals of next year’s European Championship on upcoming Friday Nov. 15, 2019, by beating Liechtenstein at home, a day that could change the mentality of a nation. (AP PhotoMarko Mumm, FILE)

After so many past disappointments, it is a day many in this Nordic country of 5.5 million inhabitants — better known for its hockey team, rally drivers and javelin throwers — thought would never arrive.

It is one that could transcend soccer, changing the mentality of a nation.

"There are always skeptics — with a sort of 'Ah, they are never going to do it anyway' feeling — in more or less everything we do, whether it is music, anything," said former Finland player Aki Riihilahti, who is now CEO of Finnish champion HJK Helsinki. "The Finnish nature is that only when there comes an external acknowledgement of an achievement do we go and support it. 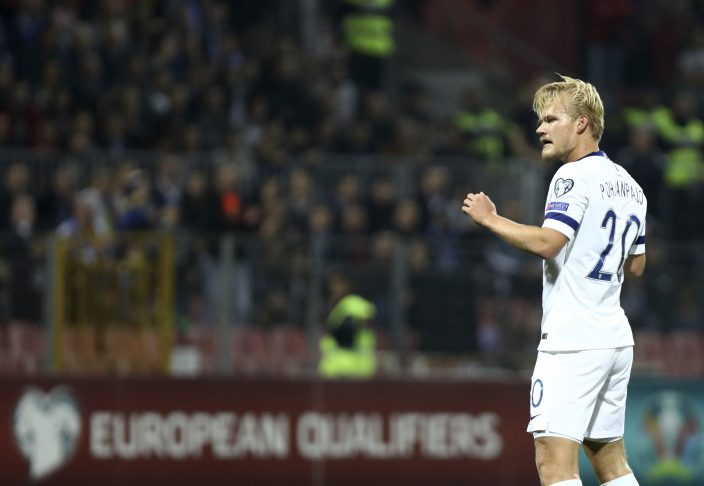 FILE - In this file photo dated Saturday, Oct. 12, 2019, Finland's Joel Pohjanpalo reacts during the Euro 2020 group J qualifying soccer match against Bosnia-Herzegovina at the Bilino polje stadium in Zenica, Bosnia. Finland could seal a place in the finals of next year’s European Championship for the first time in its history on upcoming Friday Nov. 15, 2019, if they beat Liechtenstein at home, a day many in this Nordic country thought would never arrive. (AP PhotoKemal Softic, FILE)

"For what this will mean, it is more important mentally than factually."

Finland has had better teams down the years, on paper anyway. They've had more celebrated players, too — think of Jari Litmanen, the silky playmaker for Ajax and Barcelona, and Sami Hyypia, the defensive stalwart at Liverpool. Yet getting to a World Cup or European Championship has been beyond them, despite more than 80 years of trying.

Finland remains, somewhat embarrassingly, the only major Nordic country to have never qualified for a major tournament. 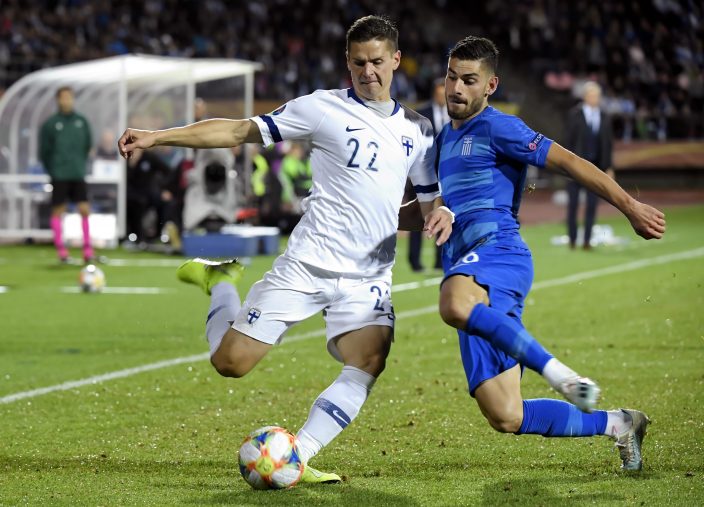 FILE - In this file photo dated Thursday Sept. 5, 2019, Jukka Raitala of Finland and Giorgos Masouras of Greece during the Euro 2020 group J qualifying soccer match in Tampere, Finland. Finland may qualify for next year’s European Championships finals if they beat Liechtenstein at home on Friday Nov. 15, 2019, and a win could transcend soccer to bring national pride to the country after so many years of soccer disappointments. (Markku UlanderLehtikuva FILE via AP)

So what's changed? The hiring of a former primary school teacher as coach has plenty to do with it.

Markku Kanerva was promoted to the job in December 2016, having previously been an assistant with the team and a former player in the 1980s and '90s. He inherited a team that had gone all of 2016 without a win and also one that was about to lose some of its best players. One midfielder, Roman Eremenko, received a two-year ban for testing positive for cocaine in 2016; another, Perparim Hetemaj, would go on to retire in early 2018 to focus on his club career.

Kanerva took a pragmatic view of the team, picking players according to their individual strengths rather than a pre-existing style and reverting to a straightforward 4-4-2 formation. His approach was based on hard work and strong defensive shape, and relied on the country's most high-profile player — striker Teemu Pukki — poaching some goals at the other end.

Kanerva also approaches coaching like he would teaching, encouraging his players to interact more, take responsibility, and learn what they have done wrong so they can improve.

The results have been striking. Finland won its group in the inaugural UEFA Nations League competition after winning its opening four qualifying games, earning promotion to League B and guaranteeing a playoff spot for Euro 2020 that might not be necessary.

In Euro 2020 qualifying, the Finns reacted to an opening loss to Italy by winning four straight Group J games without conceding a goal. After eight games, they are in second place, behind already qualified Italy but five points ahead of both Bosnia-Herzegovina and Armenia. With two teams advancing automatically, Finland needs one win from its final two qualifiers over the coming days, starting with last-place Liechtenstein, to make history.

"This is the missing piece of the puzzle," said Marco Casagrande, general secretary of the Football Association of Finland. "All the other things in our sports we have managed to do, but this is something that's still separating us from being a real sports country."

Finland's underperformance on the international stage was bought into sharp focus by Iceland, a tiny Nordic brother with a population of just 330,000, reaching both Euro 2016 and last year's World Cup.

Casagrande recalls speaking to his colleagues at the Icelandic FA, asking them: "So what's your secret?"

"It didn't help," Casagrande said, "when everyone was saying, 'You are losing all the games and Iceland is going to the Euros. Come on guys, what are you doing?'"

Iceland's rise was based on a strong collective effort combined with a sprinkle of stardust by its one standout player, Gylfi Sigurdsson, and Finland is pretty much the same.

While goalkeeper Lukas Hradecký, who plays in Germany for Bayer Leverkusen, gets plenty of plaudits, most of the spotlight falls on Pukki, the hard-working striker who has scored seven goals in qualifying and made a strong start to his first season in the Premier League with Norwich.

"Teemu Pukki is really somebody who everybody seems to love," said Riihilahti, who also played in England's top division with Crystal Palace, "and has been adopted as the Finnish savior who is bringing us to the promised land."

When Finland won the men's hockey world championship this year for the first time since 2011, there were wild celebrations in central Helsinki as champagne-swilling fans braved the cold weather by stripping off and taking a swim in the fountain and climbing on the famous Havis Amanda statue.

Expect more of the same if the country's soccer players finally make the long-awaited international breakthrough.

"Finnish people would all celebrate like a big festival," Riihilahti said. "It will go crazy."

Disney World to reopen as coronavirus cases surge in Fl ...

“The Most Magical Place on Earth” ...