A solemn day or a show trial?

Americans and the world can decide for themselves as House Democrats let the public in to the impeachment proceedings against President Donald Trump. 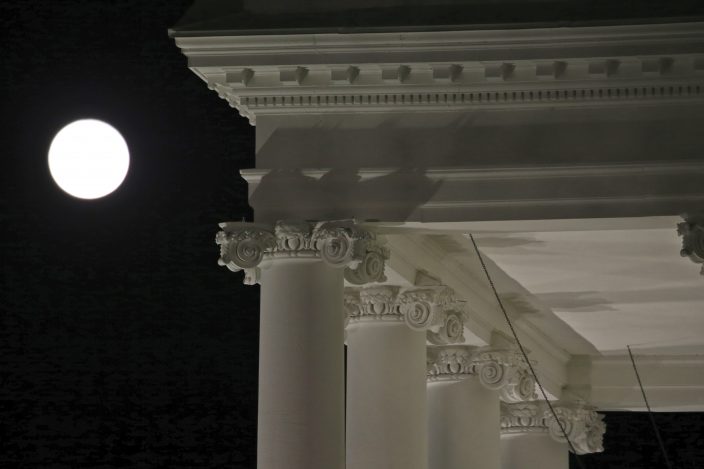 The moon rises over the North Portico of the White House in Tuesday, Nov. 12, 2019, in Washington. With the bang of a gavel, House Intelligence Committee Chairman Adam Schiff will open the hearings into President Donald Trump's pressure on Ukraine to investigate Democratic rival Joe Biden's family. (AP PhotoSteve Helber)

Impeachable offenses? Worthy of Trump's removal? And, critically, will a parade of diplomats and their accounts nudge more Americans behind formally charging Trump in the shadow of the 2020 elections?

Here's what to know about the first hearing, with the charge d'affaires in Ukraine, William Taylor, and a career diplomat, George Kent, at the witness table, beginning at 10 a.m.:

Shortly after Schiff's gavel, he and ranking Republican Devin Nunes will begin the questioning. They get 45 minutes each or can designate staff attorneys to do so.

Members of the panel will then get five minutes each to ask questions, alternating between Republicans and Democrats.

There will also be exhibits. Democrats, at least, are expected to display excerpts from transcripts, text messages, relevant news articles and social media posts.

"The President, Vice President and all civil officers of the United States, shall be removed from office on impeachment for, and conviction of, treason, bribery, or other high crimes and misdemeanors."

Expect numerous mentions of Article 2, Section 4 of the Constitution, especially on whether Trump's own words and actions meet the vague threshold of "high crimes and misdemeanors." Some Democrats and diplomats say conditioning U.S. aid on whether Ukraine goes after Biden's son Hunter sounds like "bribery." Republicans deny that, saying Trump did not explicitly offer aid for the Biden probe.

What it's not: a trial, which would be conducted by the Senate if the House approves articles of impeachment. So no matter what the president tweets, he is not entitled to a defense attorney. The proceedings are the due process he says he's being denied, though they are controlled by Democrats in ways Republicans will say is unfair.

It's only the fourth time in American history that Congress has launched impeachment proceedings against a sitting president. Two of those — against Andrew Johnson in 1868 and Bill Clinton 130 years later — resulted in their impeachments, or formal charges approved by the House. Both were acquitted by the Senate.

Former President Richard Nixon resigned in 1974 before the House could vote to impeach him.

With only hours to go before the gavel, Republicans and Democrats from Congress to the campaign trail were spinning their points of view.

"Well, it's a calm day, it's a prayerful day, it's a solemn day for our country," House Speaker Nancy Pelosi said Tuesday night on the eve of the hearings. "It's a sad day, which I wish we never had to face."

He's offering his own counterprogramming with a White House visit from Turkish President Tayyip Erdogan, which is its own story of war, trade and tension.

During the hearing Wednesday, listen for discussion about a key exchange during that 30-minute call, in which Zelenskiy invokes the still-blocked military aid and the U.S. president responds: "I would like you to do us a favor though." Trump then asks Zelenskiy to investigate a debunked conspiracy theory about the 2016 election, and later explicitly mentions the Bidens.

Trump says the call was "perfect" and contained no "quid pro quo," or this for that.

Democrats say it shows Trump using his office to pressure a foreign government to help him politically.

Democrats chose Taylor and Kent to start the storytelling of public hearings. They will describe a parallel foreign policy toward Ukraine led by Trump's personal attorney Rudy Giuliani and other White House officials.

"I discovered a weird combination of encouraging, confusing and ultimately alarming circumstances," Taylor testified in an Oct. 22 statement. He is a West Point graduate and Vietnam War veteran who has served under every presidential administration, Republican and Democrat, since 1985, and worked for then-Sen. Bill Bradley, D-N.J.

Kent, the bow tie-wearing career foreign service officer, testified on Oct. 15 that there were three words Trump wanted to hear from the Ukraine president: "Investigations, Biden and Clinton."

He also told the investigators about the "campaign of lies" against former U.S. ambassador to Ukraine Marie Yovanovitch that he said was waged by Giuliani and contributed to her being recalled from the position.

Republicans have added House Rep. Jim Jordan to the Intelligence Committee. Although Nunes is the senior Republican, look for the congressman from Ohio to act as an especially fierce attacker of the witnesses' credibility and the Democrats' case for impeachment.

At its heart, the GOP argument is that the impeachment effort is unfair and sparked because "unelected and anonymous bureaucrats disagreed" with Trump's decisions on Ukraine.

Some Republicans have urged the outing of the whistleblower.

An AP-NORC Center poll conducted in late October found Americans more approving than disapproving of the impeachment inquiry, 47% to 38%.

Even in the throes of impeachment, approval of the president's job performance has not changed significantly.

Yovanovitch, a two-time ambassador, testifies Friday as the next in the series of hearings expected to stretch through next week.

She has twice served as an ambassador — to the Kyrgyz Republic and to Armenia — before being confirmed as the U.S. ambassador to Ukraine in a Senate voice vote in July 2016.

An ambassador fired: What to watch on Day 2 of impeachment