Cattle rancher Jeffery Gatzke was tuning in between morning chores on his South Dakota farm, ready to witness what he already believed was a waste of time and a political sham: the first public hearings into impeaching President Donald Trump.

In Denver, a tech manager arranged to work from home for the moment he hoped might mark the end of the Trump presidency.

At a thatched roof tiki bar off the coast of Florida, the television would stick to sports, no debate. “We don’t talk about politics in this bar,” said Sharon Jarvis, bartender at the Ka’tiki on Treasure Island, Florida. 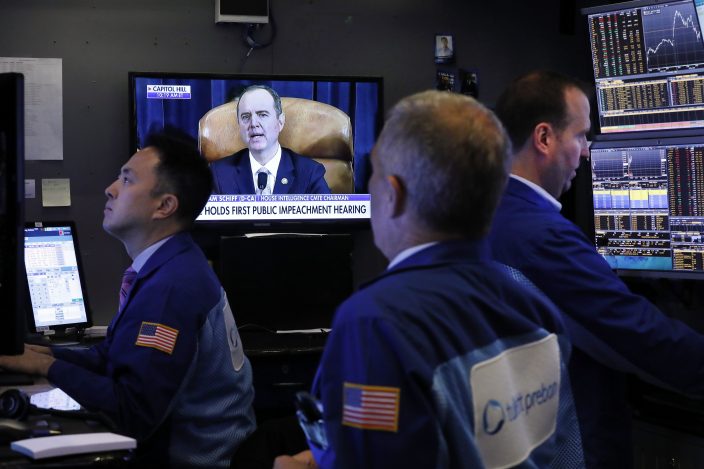 Across the country, the first public airing of the impeachment drama had millions of Americans tuning in — and, in some cases, deliberately tuning out. Although only the third time impeachment hearings were aired live on television, the proceedings in Washington were landing on a jaded and weary public, with little certainty that the event would change minds.

In many cases, “watch” isn’t quite the right verb. Americans were consuming these hearings in ways unimaginable during the last impeachment hearings more than 20 years ago. They were scanning headlines on Twitter, reading posts on social media and would click on snippets of video pushed out online in real time. Some will merely glance at tickers moving across the screen at the doctor’s office.

Others, like Adam Cutler, organized their day around what they see as a must-see moment for democracy. 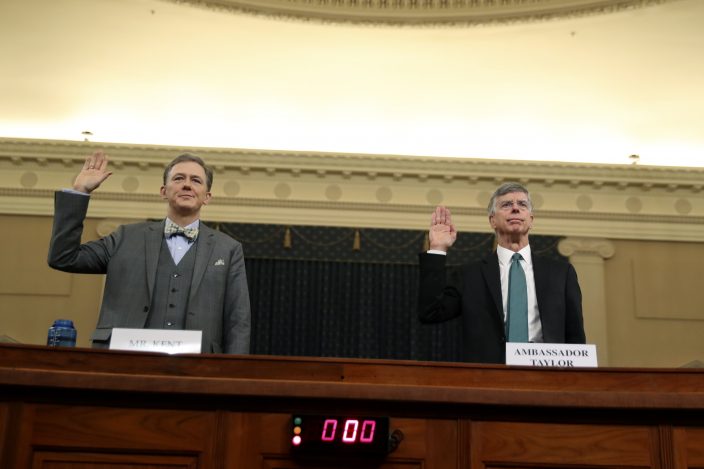 “I don’t want to say it will be the tipping point, but I think it will be the beginning of a week or two where it will be very difficult for the president to change the subject,” said the Denver Democrat, who worked from home to make sure he could watch closely.

Cutler supports Democrats’ push to impeach the president for soliciting a political favor from the president of Ukraine and, they claim, threatening to hold up millions in aid as leverage.

Like in previous nationally-televised hearings in the Trump-era — special counsel Robert Mueller’s testimony about his investigation into Russian interference in the 2016 election, or the confirmation hearing of U.S. Supreme Court Justice Brett Kavanaugh — Wednesday’s hearing marks Democrats’ latest hope in breaking the partisan stalemate that has dominated politics this decade.

Democrats were hoping, if not for a national epiphany, then at least a day that would stand out from the partisan acrimony and circus-like atmosphere of Trump-era Washington.

But there was little doubt many Americans’ views were already cemented.

Gatzke, a 50-year-old farmer and rancher from Hitchcock, South Dakota, voted for Trump in 2016 and plans to vote for him again in the next election.

He says Democrats and the Washington establishment are trying to thwart an outsider president.

"He is not one of them and they don’t like it," he said, just before the hearings began. Gatzke said he planned to watch as much as he could in the morning, before taking a break to load cattle into a truck that will take them to a meat processing plant.

Polls show Republicans oppose impeaching or removing Trump and still overwhelmingly approve of the president even after more details have arisen of how his administration held up military aid while asking Ukraine to investigate a political rival, former Vice President Joe Biden. While Democrats control the House of Representatives and likely have the votes to impeach Trump, they would need about 20 Republican senators to vote to convict him of high crimes and misdemeanors before he would be removed from office.

“The next couple of days are one of the biggest opportunities for Trump to lose some of the approval that remains among Republicans and independents,” said Christian Robert Grose, a political scientist at the University of Southern California.

Democrats are hoping the trajectory mirrors that in 1973, when the nationally-televised Watergate hearings helped hammer down President Richard Nixon’s approval rating from about 50% to a low of 24% before his 1974 resignation from office.

Live witness testimony during the impeachment investigation into President Bill Clinton did little to shift public opinion, said GOP pollster Whit Ayers. Clinton was impeached, but the Senate would not remove him from the White House amid his sky-high approval ratings.

The House Speaker who pushed the investigation, Newt Gingrich, resigned after voters punished the GOP in that year’s elections.

“The more likely outcome is that it will make red states redder and blue states bluer,” Ayres said of the Trump impeachment hearings.

Voters in Romania were casting bal ...