The Latest on President Donald Trump and the House impeachment inquiry (all times local): 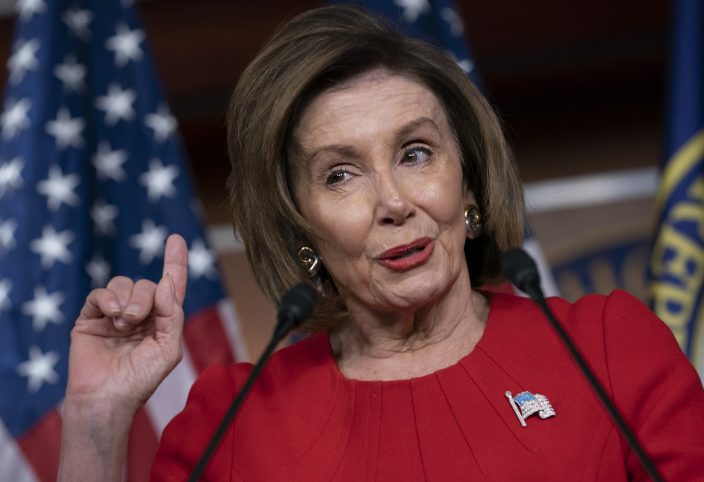 Speaker of the House Nancy Pelosi, D-Calif., talks to reporters on the morning after the first public hearing in the impeachment probe of President Donald Trump on his effort to tie U.S. aid for Ukraine to investigations of his political opponents, on Capitol Hill in Washington, Thursday, Nov. 14, 2019. Pelosi says the president's actions in the impeachment inquiry amount to "bribery." (AP PhotoJ. Scott Applewhite)

Democrats are investigating whether Trump abused his office when he pressed the Ukrainian government to investigate his political rivals.

But Trump’s campaign has argued the probe is helping Trump, citing a spike in contributions and enthusiasm.

Rick Gorka, a spokesman for the national Republican Party and the campaign says that pushback efforts have generated nearly $10 million in free press in the states.

He’s also reporting a surge in volunteers and says the response “we’re receiving from the field has been tremendous.”

Bribery is an impeachable offense spelled out in the Constitution.

The House opened public hearings this week in the impeachment inquiry. It revolves around Trump asking the Ukraine president for a “favor” in a July phone call. Trump wanted an investigation of Democrats and 2020 rival Joe Biden, while withholding military aid, according to the testimony.

Trump calls the inquiry a “hoax” and a “sham.”

Strongly predict the malarkey of Trump-Biden debate for ...

A man wanted in a deadly shooting ...

The Latest: Trump says he doesn’t expect to be impeached

The Latest: Sondland spoke with Trump day after Ukraine call