Yet the elderly crowd gathered in the back of the Southern Barrell Brewing Company in this town near the South Carolina coast sure did appreciate the waitresses offering free iced tea and lemonade as they waited for the wealthy White House hopeful to take the stage. The fried tomatoes and mozzarella sticks were a hit, too.

“That’s nice of Tom to pick up the drinks,” said Terry Temple, a 73-year-old independent who said she doesn’t hold Steyer’s wealth against him. “He worked hard for what he’s got.” 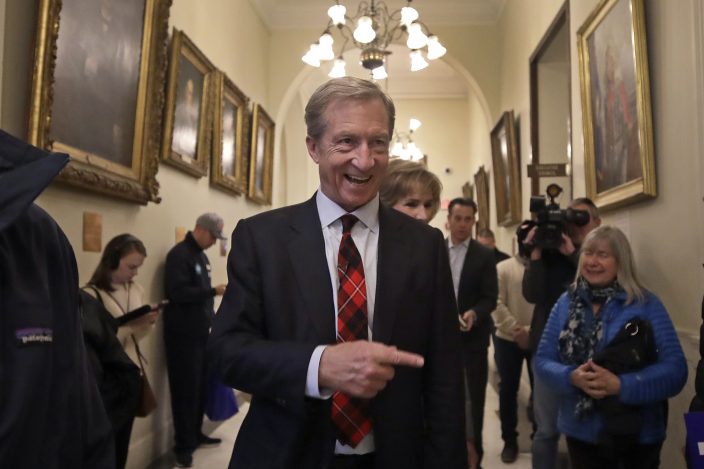 FILE - In this Nov. 12, 2019, file photo, Democratic presidential candidate businessman Tom Steyer walks in the hallway of the Statehouse after filing to be placed on the New Hampshire primary ballot in Concord, N.H. Steyer is digging deep into his personal fortune to rewrite the rules of presidential politics. Still, he’s struggling to break out of the pack and soon might not be the only billionaire in the race. (AP PhotoElise Amendola)

Welcome to campaigning with the billionaire who goes by “Tom,” a hedge fund manager-turned-liberal activist who’s digging deep into his personal fortune in hopes of creating space in the crowded 2020 Democratic primary. He’s doing so as wealth itself is under attack as never before in presidential politics, in an election in which several candidates — Steyer included — have rallied behind a wealth tax and openly questioned whether billionaires should exist at all.

For now, they do.

And beyond free food and drinks, Steyer has used his wealth to rapidly assemble a sprawling staff across several states that now exceeds 300. He has paid operatives on the ground in at least five Super Tuesday states. And he’s blanketing the airwaves with an advertising campaign that’s dwarfing his opponents’ best efforts. 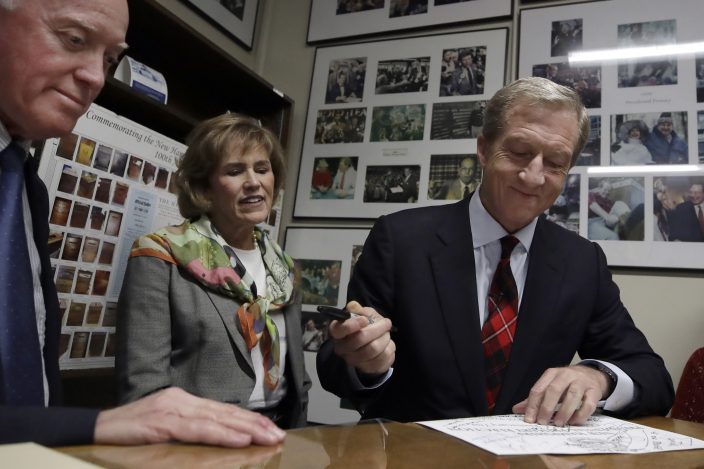 He entered the race months after most of his competitors, but Steyer has already spent $4 million more on internet ads than any other Democrat. In Iowa alone, he has spent twice as much as his next closest rival, Pete Buttigieg, and more than all the others next on the list combined, according to data obtained by The Associated Press.

In an AP interview, Steyer said he’s prepared to spend more than the $100 million he initially pledged toward his presidential ambitions if necessary. Separately, he’s said he’s still committed to giving at least an additional $50 million this election cycle to outside groups he helped create, including one devoted to President Donald Trump’s impeachment.

What would he say to people who think he’s trying to buy the presidency?

Still, four months after entering the race, he’s struggling to break out.

His message, focused on combating climate change, impeaching Trump and fighting corporate corruption, has been drowned out so far by similar rhetoric from better-known rivals and a series of embarrassing missteps by newly hired staff. And in a matter of days, he may lose his greatest advantage — money — should former New York City Mayor Michael Bloomberg formally join the race.

Steyer showed signs of being both excited and annoyed by a prospective Bloomberg bid during an interview as he trekked across South Carolina on a recent campaign swing. Asked whether there was room for another billionaire in the race, he responded: “I don’t even know if there’s room for another Republican in this race.”

“He’s been a Republican, an independent. Didn’t he just register as a Democrat?” Steyer jabbed.

Indeed, Bloomberg registered as a Democrat in October 2018 after many years as both a Republican and an independent.

Still, Steyer’s eyes lit up as he contemplated the broader meaning of Bloomberg’s likely entrance.

“You know what that says to me? Exactly what I’ve been saying all along. This race is completely up in the air — seriously,” he said before turning to a favorite Sherlock Holmes reference: “The game is afoot.”

Steyer’s optimism comes amid rising pessimism from Democratic establishment leaders about the strength of former Vice President Joe Biden’s 2020 campaign. Steyer, while more liberal than Biden on some measures, is largely competing in the same moderate lane of the Democratic primary because of his business background. And he’s betting a significant portion of his fortune that he will be the prime beneficiary should Biden fall.

Buttigieg, too, has appealed to moderate voters. And several lower-tier candidates, such as Sens. Kamala Harris of California and Amy Klobuchar of Minnesota, have been fighting aggressively for much of the year to win over the party’s pragmatic wing.

Steyer joined the presidential race in July, months after most of his competitors. Yet he’s assembled a sprawling paid presence that exceeds that of most of his Democratic rivals.

Campaign manager Heather Hargreaves also notes that they’re aggressively hiring staff for the so-called Super Tuesday states that come next on the primary calendar. That includes state directors in California, where the campaign is based, and Tennessee, Alabama, Colorado and North Carolina.

“I fully admit that we have to build more support between now and Feb. 3 (the date of Iowa’s kickoff voting contest), but I think that we’re in a great place to do that based on our infrastructure and the fact that we obviously have the resources to sustain a campaign through the early states and beyond,” said Hargreaves, a veteran of former President Barack Obama’s campaign.

A top Steyer aide in South Carolina was forced to resign earlier in the month after it was revealed that he accessed volunteer data from Democratic rival Harris’ campaign. And a few days later, a top Steyer aide in Iowa resigned after the AP reported he had privately offered campaign contributions to local politicians in exchange for supporting Steyer.

But in Bluffton, Steyer’s wealth was viewed as a political asset.

Several voters in the crowd noted that he’s taken a pledge to donate half of his fortune to charity in his lifetime.

“He hasn’t used his money just for himself and his family. He’s worked for the people,” said Bobbi Helton, a retired self-described Democrat from nearby Hilton Head.

She was also pleasantly surprised to learn that Steyer’s campaign was offering goodies at the event.

With a smile, she said: “I’ve gone to a lot of these, and I never thought we’d have free food and drinks!”

In Paris, Hornets look for ways to stop Antetokounmpo

Technology companies are leading U ...

Steyer, buoyed by polling, makes push for Latinos in Nevada