When a ceremonial Native American shield returned to New Mexico, tribal leaders were there last week to greet it — a sacred piece that had held a place in their cycle of ceremonies until it vanished from their centuries-old, mesa-top village in the 1970s.

Nearly four years ago, it resurfaced, but as an auction item in Paris, prompting the tribe’s leaders to begin making public appeals for it to be pulled from bidding and returned to them.

Their push is finally nearing an end. U.S. and Acoma Pueblo officials plan to announce Monday that an FBI agent delivered the shield from Paris last week following a multiagency effort that involved U.S. senators, diplomats and prosecutors. 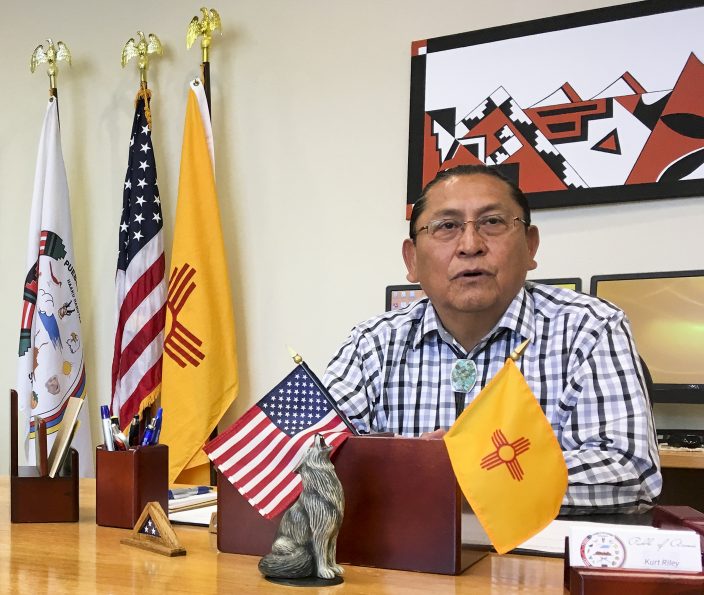 FILE - In this June 8, 2016, photo, Gov. Kurt Riley, of Acoma Pueblo, discusses his tribe's move to repatriate a ceremonial shield from Paris, France, during an interview in Acoma Pueblo, N.M. A ceremonial shield has been returned to New Mexico more than three years after it became central to an international debate over the export of Native American items. U.S. and Acoma Pueblo officials planned Monday, Nov. 18, 2019, to announce the shield’s return from Paris, where it had been listed for bidding in 2016 before the EVE auction house took the rare step of halting its sale. (AP PhotoMary Hudetz, File)

It will formally be returned to Acoma Pueblo after a judge dismisses a civil forfeiture case that prosecutors filed in an attempt to secure its return, U.S. Attorney John Anderson said. Until then, it’s being held in a federal building in Albuquerque.

“It will be a day of high emotion and thanksgiving,” Gov. Brian Vallo of Acoma Pueblo said ahead of the shield’s expected return to his tribe.

The shield — a colorful, circular piece featuring the face of a Kachina, or ancestral spirit — is among hundreds of Native American items, many of them considered sacred by tribes, to be sent to Paris auction houses by collectors over the years. U.S. laws prohibit the trafficking of certain tribal items domestically, but it doesn’t explicitly ban dealers from exporting them.

Facing protests over the sales, the auction houses long stood their ground against pressure to halt bidding on Kachinas, mask-like pieces and Plains war shirts, saying that doing so could have broad repercussions for the art market in general. In the years since the Acoma Pueblo shield was pulled from auction, the EVE auction house has not responded to interview requests from The Associated Press.

Federal officials said the shield had remained stored at the auction house since 2016 until an FBI agent retrieved it about a week ago.

“Our goal here was to get this item back. But I'm also hoping that a collateral effect of our efforts here and the publicity that this gets is that other people will become more aware,” Anderson said in an interview Friday. “This shield obviously is a high priority item for us and for Acoma, but it's by no means unique ... It's not the only item out there of cultural patrimony that is subject to purchase and sale that shouldn't be.”

The shield’s return to Acoma Pueblo does not mark an end to having more spiritually significant items returned to tribes, he said. “I’ll tell you it’s still an area in which federal law enforcement is quite active,” Anderson said.

The uproar over auction plans for the shield in 2016 was followed that year by legislation to prevent more items tribes hold sacred from being sent overseas.

His legislation would increase penalties within the United States for trafficking certain tribal objects by increasing prison time from five years to 10 years for violating the law more than once.

At the same time, the bill would establish a framework for collectors to return protected items to tribes and avoid facing penalties.

For generations, the shield, considered the property of the entire tribe, remained safely in a home atop a 367-foot, sandstone mesa, tribal leaders say. While it was placed in the care of different community members over the years, it did not belong to any single person, making its removal from the pueblo illegal under tribal law, according to Acoma leaders.

The tribe’s reservation west of Albuquerque is bordered by mountains and El Malpais National Monument, where historians say Puebloan ancestors built homes amid cliffs and ancient lava fields as early as 950 A.D.

The traditional village of Sky City, situated on the mesa, dates to 1150. Its multistory adobe complexes and homes overlook an expanse of desert marked by rock monoliths.

An affidavit from Acoma Pueblo obtained by the AP in 2016 said the shield disappeared after a break-in.

In a statement Monday, Acoma Pueblo officials said the shield had been in the possession of a family for decades that did not know of its ceremonial significance.

Jerold Collings, who court records show sent the shield to Paris for auction, said previously he had inherited it, not knowing it may have been stolen. The tribe’s leaders credited Collings for agreeing to a court settlement in July that called for EVE auction house to release the shield to the U.S. Embassy in Paris.

That agreement set in motion the process for the shield to return to Acoma Pueblo, where Vallo, the governor, said it will eventually be held at a museum before it’s returned to the Sky City village and eventually re-introduced into ceremonies.

“There’s no place for illegal acquisitions and sale of these items,” he said. “We hope future laws ensure these items are protected and returned.”

Lightning's Stamkos out for Game 4, not ruled out ...

Colleges across the country are st ...