The House impeachment hearings are entering a crucial second week as Democrats are set to hear from eight additional witnesses about President Donald Trump’s dealings with Ukraine. Three State Department officials have already testified about their concerns as Trump pushed Ukraine to investigate Democrats and withheld military aid from the country.

What’s ahead on the impeachment schedule:

A PARADE OF WITNESSES 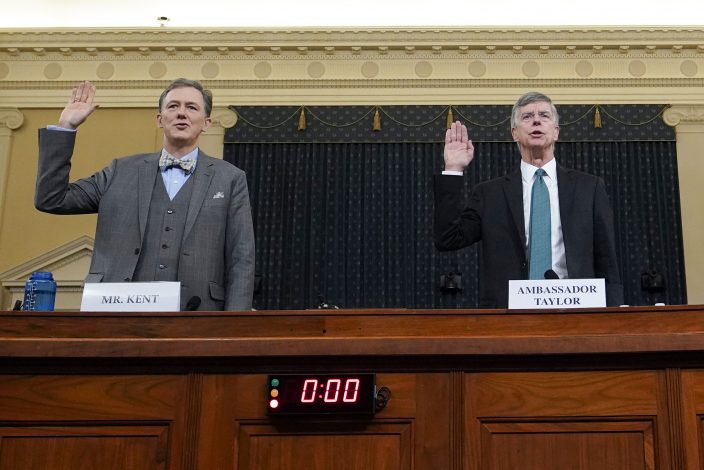 The House intelligence committee, which is conducting the impeachment hearings, has set a breakneck schedule ahead of the Thanksgiving recess.

Eight more witnesses will testify, some in back-to-back hearings on the same day. Among them will be Lt. Col. Alexander Vindman, a National Security Council official who said he raised concerns in the White House about Trump’s push for investigations; Gordon Sondland, Trump’s European Union ambassador, who spoke to the president about the Ukraine policy; and Fiona Hill, a former Russia adviser to the White House who told lawmakers about former National Security Adviser John Bolton’s concerns about Ukraine.

All of the witnesses testifying have already spoken to investigators in closed depositions, some of them for 10 hours or more. 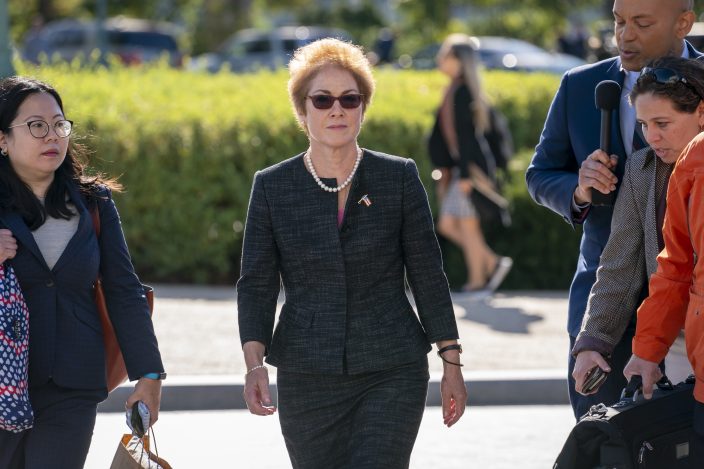 Perhaps the most anticipated witness is Sondland, since he spoke multiple times to the president about Ukraine policy. Sondland will testify alone on Wednesday morning.

Other witnesses’ testimony suggests Sondland was intimately involved in discussions over whether Trump held up the military aid to Ukraine to try to pressure the county’s president to announce the investigations into Democrats, including former Vice President Joe Biden, a leading 2020 candidate, and his son, Hunter. 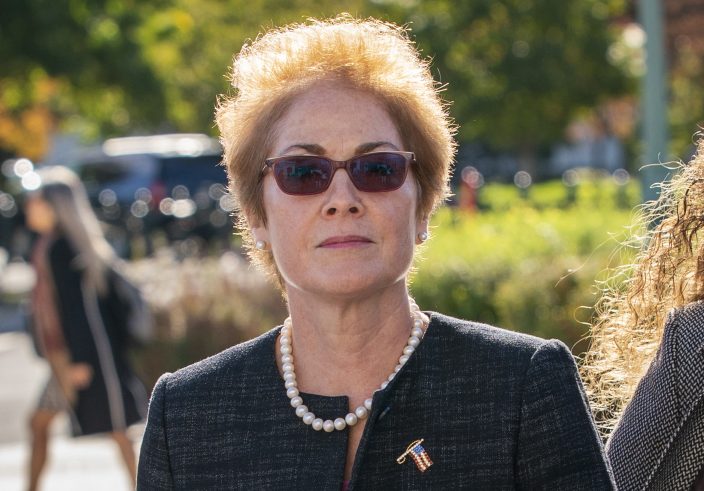 FILE - In this Oct. 11, 2019, file photo, former U.S. ambassador to Ukraine Marie Yovanovitch, arrives on Capitol Hill in Washington. The House impeachment panels are starting to release transcripts from their investigation. And in one of them, Yovanovitch says that Ukrainian officials warned her in advance that Rudy Giuliani and his allies were planning to "do things, including to me." (AP PhotoJ. Scott Applewhite, File)

Testimony last week revealed that at least three people overheard a July phone call in which Trump and Sondland discussed efforts to push for the investigations. One of those people, David Holmes, the political counsel at the U.S. Embassy in Ukraine, said he heard Trump’s voice through the earpiece of the phone because the president was talking so loud, according to testimony obtained by The Associated Press. Sondland called Trump as they dined at a Kyiv restaurant for lunch.

Holmes said that Sondland told Trump on that call that Ukrainian President Volodymyr Zelenskiy would do the investigations and would do “anything you ask him to.”

The overheard call came a day after a call between the two presidents that is at the heart of the Democratic probe. In that call, Trump directly asked Zelenskiy to investigate the Democrats. 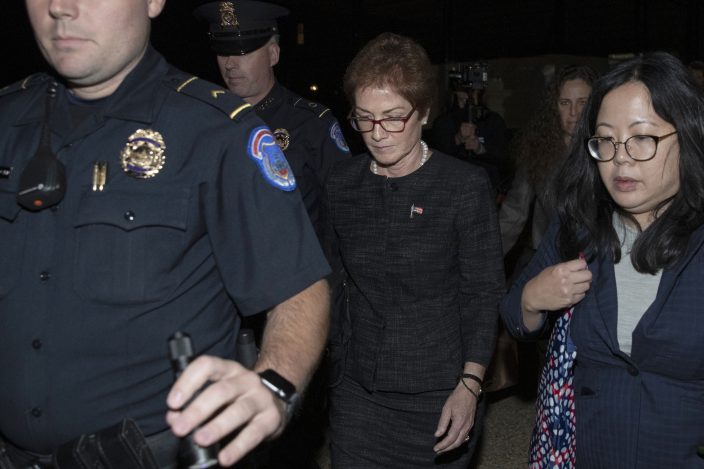 FILE - In this Oct. 11, 2019, file photo, former U.S. ambassador to Ukraine Marie Yovanovitch, center, leaves Capitol Hill in Washington, after testifying before congressional lawmakers. The House impeachment panels are starting to release transcripts from their investigation. And in one of them, Yovanovitch says that Ukrainian officials warned her in advance that Rudy Giuliani and his allies were planning to "do things, including to me." (AP PhotoManuel Balce Ceneta, File)

Trump has said he has no recollection of the overheard call and has suggested he barely knew Sondland, a wealthy donor to his 2016 campaign. But Democrats are hoping Sondland sheds new light on the discussions.

TWO OF THE “THREE AMIGOS”

The intelligence committee will hear from both Sondland and former Ukrainian envoy Kurt Volker this week — two of the so-called “three amigos” who had taken the lead on Ukrainian policy outside normal channels. The third “amigo” was Energy Secretary Rick Perry, who has refused to provide documents or testify in the impeachment probe on Trump’s orders.

Several of the diplomats who were supposed to be in charge of Ukraine policy have testified about their concerns as the men appeared to coordinate with Trump’s personal lawyer, Rudy Giuliani.

Volker, who will testify on Tuesday afternoon, was closely involved in negotiations with Ukrainian officials as they tried to figure out how to meet Trump’s demands.

INSIDE THE WHITE HOUSE

In addition to the State Department officials, the nation will hear for the first time from aides who were privy to turmoil within the White House over Ukraine.

Vindman and Hill both told investigators behind closed doors about a July meeting at the White House in which Sondland told Ukrainian officials that Zelenskiy would have to open an investigation into the Bidens if he wanted a meeting with Trump at the White House.

"There was no ambiguity," said Vindman, an Army officer detailed to the White House who showed up at the deposition in his military uniform.

Hill testified that former National Security Adviser John Bolton abruptly ended the meeting when Sondland brought up the investigations. She said Bolton later compared the ask to “a drug deal.”

Judiciary is expected to hold its own hearings and, eventually, vote on articles of impeachment. Democrats say they are still deciding whether to write them.

Next would come a floor vote, and if articles of impeachment are approved by the House, there would then be a Senate trial.

House Democrats are hoping to finish the process by the end of the year. A Senate trial, if called for, would likely come in 2020.

Law firm criticized by USSF asks to withdraw from lawsu ...

Seyfarth Shaw, the law firm whose ...

Some are perched in trees. Some ar ...