Paul Reiser and Helen Hunt thought long and hard about whether to do a reboot of “Mad About You,” the NBC sitcom staple of the ‘90s set solidly inside the Buchman family bubble.

“We had 20 years of lunches where we said, 'Absolutely never, ever.’ It was the worst idea,” recalled Hunt, who played Jamie Buchman to Reiser’s Paul.

Reiser added during a recent interview: “It was a joke.” Time hop to Wednesday and the debut of the “Mad About You” redux on Spectrum Originals, a limited series available exclusively to the telecommunications conglomerate’s on-demand subscribers.

The series ended in 1999 after seven seasons with a two-part finale that did some time hopping of its own. Janeane Garofalo played Jamie and Paul Buchman’s only child, Mabel, who was seen all grown up for the first time since infancy when she narrated 22 years into the future to end the show.

The future is now. The new show picks up as an anxiety-prone Mabel (Abby Quinn) heads off to college, unraveling mom Jamie in the apartment where the Buchmans continue to live in downtown New York, just five blocks from Mabel’s New York University dorm room. 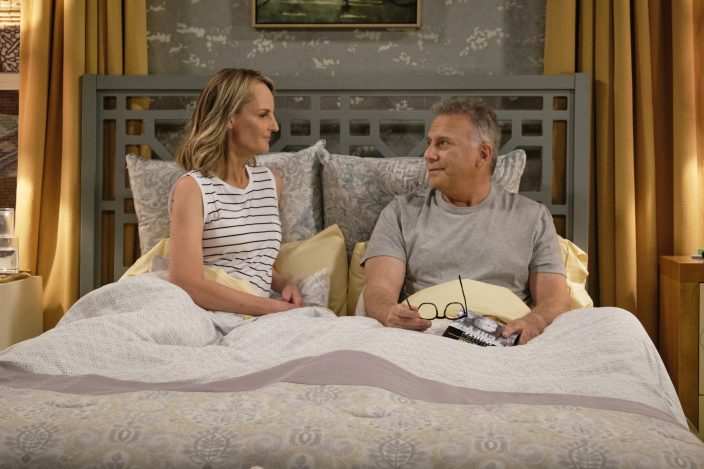 It was that seamless timing, Mabel’s emerging adulthood, that got the two stars thinking they could do it all over again. That and the fact that some shows in recent years have rebooted with a shred of dignity: “Will & Grace” and “Roseanne”-turned-“The Conners,” for instance.

“We did everything we wanted to do and finished,” said Reiser, who created the series with Danny Jacobson. “Then we just — would we? I mean, people want us to do it. It would be crazy, right?’” Reiser, Hunt and others in the original cast, including Richard Kind, John Pankow, Anne Ramsay and Cynthia Harris, picked up from a main set that’s about eight miles from where the original was shot in Hollywood. Paul and Jamie’s apartment is redecorated and expanded with some of the same basic bones.

“It was totally weird until four hours in, when it was weird that it wasn’t weird,” Hunt said of stepping on to the new set. “I looked at Paul and went, 'Did we just take a three-month break? What's happening?'”

Gone is the original’s stellar recurring cast: Mel Brooks, Carroll O’Connor and Cyndi Lauper among them, along with a slew of notable guest stars: Ellen DeGeneres, Yoko Ono and Carl Reiner, to name a few.

Also gone is their thick-headed collie mix Murray, replaced by a lanky mixed breed dog they decide to call Walter.

Spectrum’s first round includes six episodes, with six more to follow on Dec. 18 as Paul and Jamie recalibrate as empty nesters.

The new series, Reiser said, “is about Paul and Jamie finding their mojo again. And how do we get back? Because we ain't the people we used to be.”

After hundreds of hours of couples therapy back in the ‘90s, Jamie decides to become a therapist herself. As for Paul, his barely off the ground documentary film career didn’t happen. He’s making a commercial for male catheters instead.

“We always endeavored to sound more like real life than a TV show,” Reiser said. “And I think more than anyone, Helen, surprisingly, maybe surprisingly, is the one who would say, 'But it's got to be funny. Let's not forget that this is a half-hour comedy.’”

A half-hour comedy intended as friendly fare then and now, with no politics or plots tackling out-on-a-limb issues of the day. There’s some cursing, and Jamie flashes a middle finger at one point on the new show, but generally it carries on old school style with Reiser’s amiable bumbling and Hunt’s acting chops on display.

The original was blessed in a way. Hunt said of the show’s rotating roster of comedic star power back in the day that they were “insanely lucky” to have “so many of our heroes who actually walked in the room and played with us.”

Hunt won an Oscar for the 1998 film drama “As Good as it Gets, while Reiser has been working steadily through the years in film and television. He has also written three books about coupledom and parenthood.

The two produced, executive produced and wrote some of the original, with Hunt directing a handful of its 164 episodes. The new show, produced by Sony Pictures Television in association with Comedy Dynamics, has them executive producing once again.

As for that ear worm of a theme song, “Final Frontier,” it was co-written by Reiser and Don Was. And it’s back. Only this time around, it’s neither Andrew Gold, who sang it first, nor Anita Baker, who picked up the gig later on.

Lyle Lovett and Kecia Lewis do the crooning, with a couple of other connections to the series.

Lewis plays Mark Devanow’s new wife on the reboot. In the original, Lovett was Lenny, the guy who launched Jamie and Paul into marriage. Only he didn’t.

He later confesses he was a faux minister, propelling this TV couple into crisis yet again.