Tom Hanks has never played a superhero. But when the actor recently donned a very simple cardigan sweater, and the slacks to go with it, he felt like one.

“I felt like Batman. It felt like I was wearing the cape and the cowl of the Dark Knight detective,” Hanks says. “There’s only one person you can be when you put those things on, and that’s Fred Rogers.”

Since it was first announced, Hanks’ casting as the beloved children’s television host in “A Beautiful Day in the Neighborhood” has had the feeling of kismet. Here was an actor nearly synonymous with affability, with “niceness,” playing one of the friendliest faces to ever flicker across a TV screen. Hanks might as well have been answering a Bat Signal in the sky. 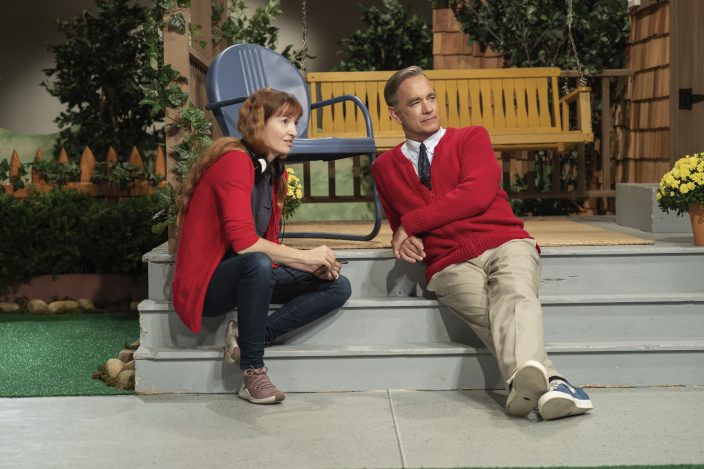 This image released by Sony Pictures shows director Marielle Heller, left, and Tom Hanks on the set of "A Beautiful Day In the Neighborhood," in theaters on Nov. 22. (Lacey TerrellSony-Tristar Pictures via AP)

But as inevitable as Hanks playing Mr. Rogers may have seemed, it never would have happened without Marielle Heller, the filmmaker of the literary forger drama “Can You Ever Forgive Me?” and the ‘70s coming of age tale “The Diary of a Teenage Girl.” The film’s script, by Noah Harpster and Micah Fitzerman-Blue, had been floating around for years before Heller got attached. Hanks had already passed on it, more than once.

“I didn’t pass on you,” Hanks said in an interview alongside Heller. “I just passed on a thing.”

It would probably please Mr. Rogers that the first big-screen fiction film about him was based, from the start, on a newfound friendship. Hanks and Heller met at a backyard birthday party for Hanks’ son Colin. Hanks had just read a New York Times article about female filmmakers and mentioned it to Heller after learning she was a director.

This Nov. 17, 2019 photo shows Marielle Heller, left, and Tom Hanks pose for a portrait in New York to promote their film, "A Beautiful Day In The Neighborhood." (Photo by Matt LicariInvisionAP) 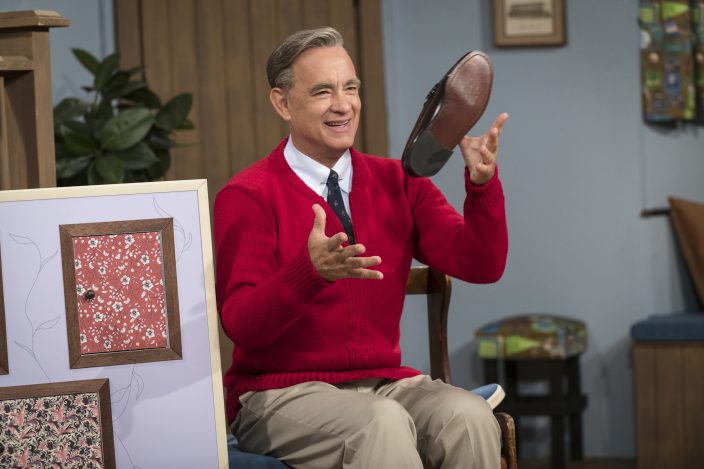 Within days, Hanks called to set up a meeting, and that led to “A Beautiful Day in the Neighborhood.” Sony Pictures releases it in theaters this weekend. Based loosely on an Esquire Magazine article by Tom Junod, the film’s protagonist is a New York journalist named Lloyd Vogel (Matthew Rhys) assigned to profile Rogers. Heller and Hanks view Rogers as the movie’s antagonist — the agent of change in Lloyd’s life, whose sincerity and caring disarm the cynical reporter.

Getting close to Rogers also altered Hanks and Heller. The production had the blessing of Joanne Rogers, Fred’s widow, and much of it was shot on location in Pittsburgh. Hanks wore Rogers’ old ties. He swam the same laps in a local pool. They collectively tried to live the kindness preached by Rogers, an ordained Presbyterian minister. The movie impresses the point that Rogers wasn’t a saint; he had to work at being good.

“At one point early on, Tom said to me, ‘I get the feeling none of us are going to be the same after making this movie,’” Heller says. 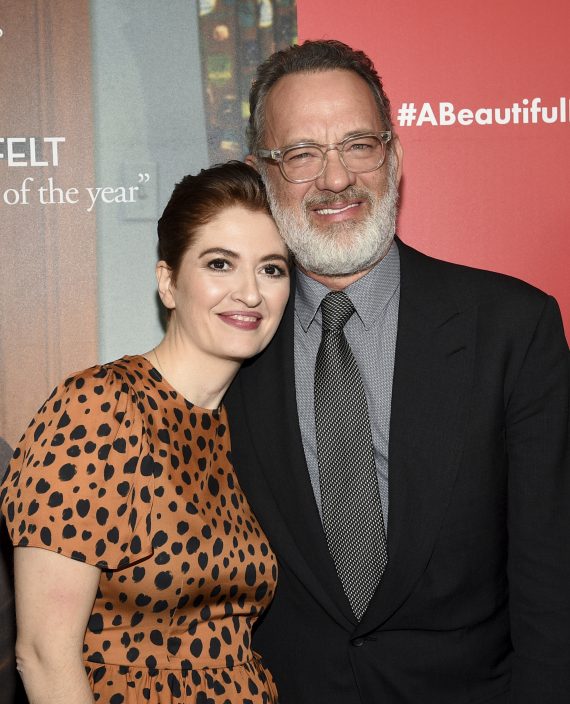 Director Marielle Heller, left, poses with actor Tom Hanks at a special screening of "A Beautiful Day In The Neighborhood" at the Henry R. Luce Auditorium on Sunday, Nov. 17, 2019, in New York. (Photo by Evan AgostiniInvisionAP)

That meant trying to slow down not just the tempo of the scenes but the entire workings of a movie set. Heller’s son, 2-years-old when they started, was often on set, and occasionally in the director’s chair. Heller shortened the day-to-day schedule so that everyone, including herself, could be home by their children’s bedtime on most nights.

Both were relatively new disciples to Rogers. As a kid, the 40-year-old Marin County-raised Heller dismissed him as too schmaltzy. But now a parent, she found herself gravitating toward Mr. Rogers as a guide to explaining the world to her son. Hanks, 63, hadn’t raised his four now-grown children watching “Mr. Rogers’ Neighborhood,” so the dozens of hours he spent watching it to prepare for the role was eye-opening. 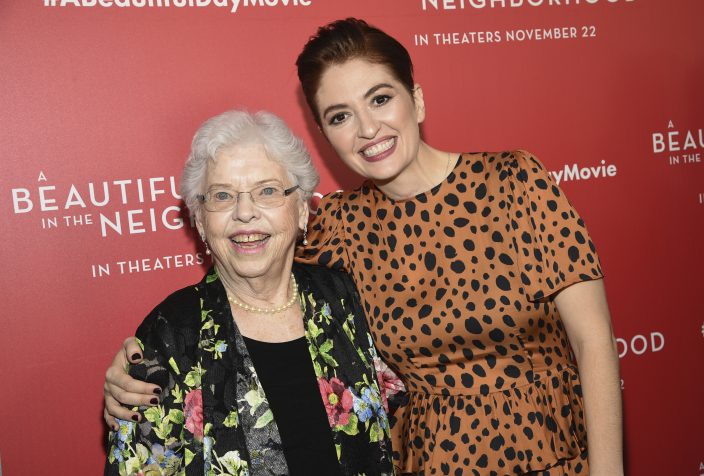 Director Marielle Heller, right, poses with Fred Rogers' widow Joanne Rogers at a special screening of "A Beautiful Day In The Neighborhood" at the Henry R. Luce Auditorium on Sunday, Nov. 17, 2019, in New York. (Photo by Evan AgostiniInvisionAP)

“I almost feel silly talking about it,” says Hanks. “This movie has actually made me think a lot about myself as a man and a father. When I saw Mari, I said, ‘Hey, thanks putting me in this movie, because you kind of changed my life, boss.’”

For Hanks, the greatest lesson from playing Rogers has to do with listening. As an actor and a celebrity, it’s part of his job to be entertaining, to be glib. And he is extraordinarily good at it. Few people in person live up to their reputation more than Hanks does, who began the interview delighted at the idea of drinking from “a box of water.” Quietude doesn’t exactly come naturally, nor would most around Hanks want it to.

“There is a thing that I do: W-A-I-T. It stands for ‘Why Am I Talking?’” explains Hanks. “I wrote that down in a notebook that I keep to remind myself that listening, for me anyway, is a disciplinary art. I have to force myself to listen because I love the sound of my own voice and because I’m a movie star I’ve been infantilized by everybody I come across who says I’m just wonderful. ‘Look at you! You can stand up so good and you can eat with a fork! What a special, special, special movie star you are!’” 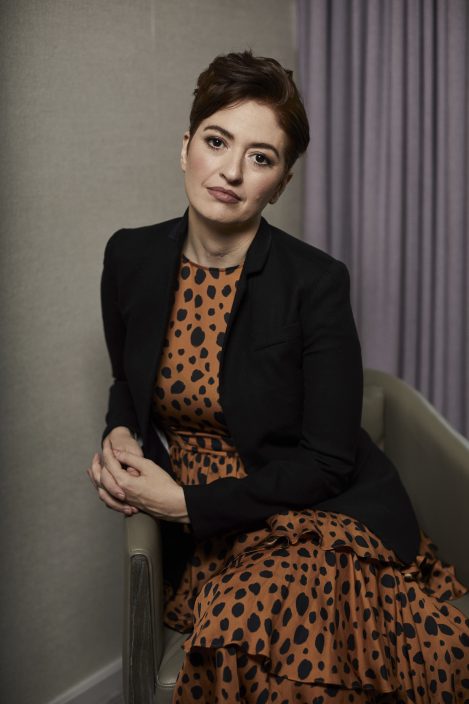 This Nov. 17, 2019 photo shows director Marielle Heller posing for a portrait in New York to promote her film, "A Beautiful Day In The Neighborhood." (Photo by Matt LicariInvisionAP)

Slowing down took effort for Hanks, and for Rhys. At one point, they met to rehearse a lengthy scene at Rhys’ New York apartment. “I said, ‘Are you as exhausted by this as I am?’” says Hanks. “He said, ‘Tom, I’m confounded by how much silence we have to have in this movie.’”

The movie called on Hanks to learn how to earnestly — not out of habit — ask questions like “How are you?” Heller would tell Hanks to thank Lloyd, “but this time mean it.” In her three richly textured films, Heller has shown an uncommon talent for coaxing three-dimensional performances out of her actors, including Melissa McCarthy and Bel Powley, that radiate humanity and humor while omitting sentimentality.

“I’m sort of like the authenticity police,” says Heller. “I’m there to make sure what we’re capturing is true. So much of my job is to be the one on set going, ‘Did I feel that? Did it feel true?’” 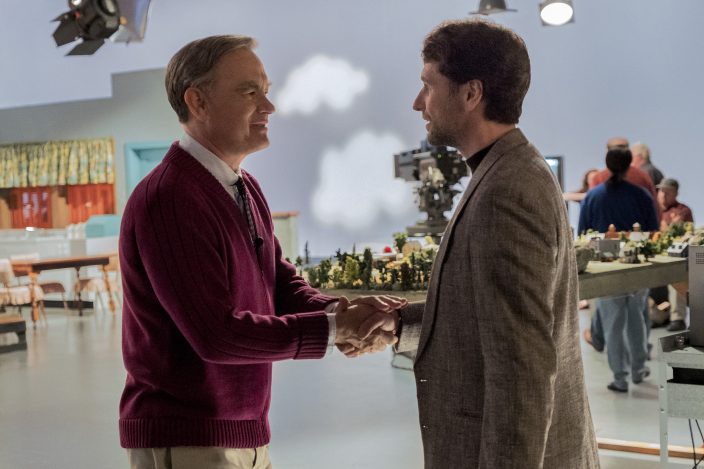 This image released by Sony Pictures shows Tom Hanks, left, and Matthew Rhys in a scene from "A Beautiful Day In the Neighborhood," in theaters on Nov. 22. (Lacey TerrellSony-Tristar Pictures via AP)

In Hanks’ Mr. Rogers, Heller wasn’t interested in an impression. A wig and some eyebrows were OK, but that was it. And, of course, the cardigan. The first time Hanks stepped onto set at WQED’s Fred Rogers Studio in character, sweater-to-sneakers, Heller says, “the room gasped.”

“It was like coming in as Elvis into Graceland,” says Hanks, a little sheepishly. “I had no sense of self. I really felt like I was having an out-of-body experience of watching this other guy be Fred Rogers.”

Having recently explained death to her now 5-year-old son, Heller was concerned he’d be confused. She didn’t have to worry. 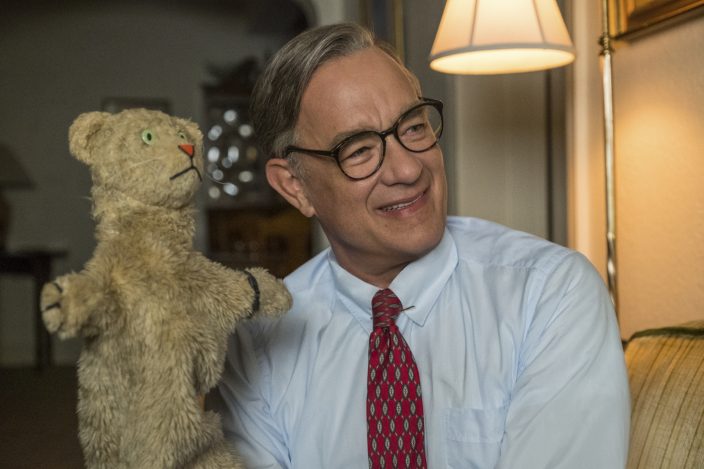 On their way out of the interview, Heller leans against Hanks and says how much she enjoys talking about the film with him. He’s preoccupied with Heller’s batting average as a director. “Mari ‘three-for-three Heller,” he says, liking the sound of it. He turns to her. “You know,” Hanks says, “none of these movies should have worked.” They walk out arm in arm.