After hitting a top speed of 628 miles per hour (1,010 kilometers per hour) in South Africa’s Kalahari Desert, the earthbound jet that is Bloodhound is being packed up to return with its crew to Britain.

Part F1 racecar, part jet and part spaceship, Bloodhound completed four weeks of high-speed testing on the Hakskeen Pan track. Its crew will study the results to see what size rocket must be harnessed to the vehicle to help it break the world’s land speed record.

“It’s been terrific. The car, the track, the team, all have worked amazingly well,” spokesman Jules Tipler told The Associated Press. 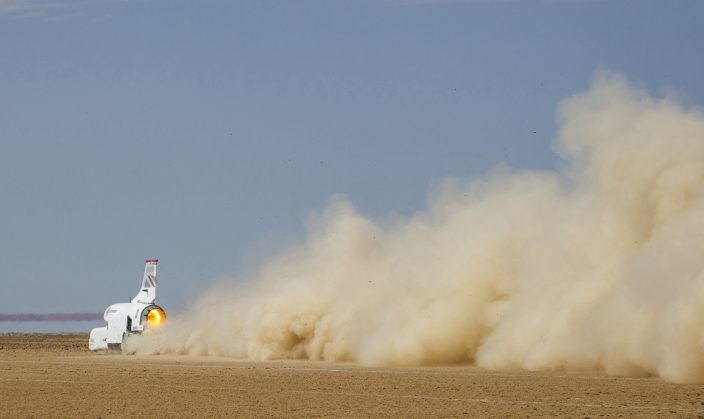 In this handout photo provided by Bloodhound, the vehicle speeds along the Hakskeenpan track in South Africa during trials to set a land speed record Friday, Nov. 8, 2019. Hitting 501 miles per hour on the South Africa’s northern desert, the Bloodhound became one of the world’s 10 fastest cars this week, on target for its goal to set a new land speed record. A jet that stays on earth, Bloodhound’s next goal is to reach 550 miles per hour, possibly in the coming week. (Charlie SperringBloodhound via AP)

Norwegian rocket manufacturer Nammo is developing a monopropellant rocket that is expected to produce the additional thrust needed for Bloodhound to break the world land speed record of 763 miles per hour (1,228 kilometers per hour) set in 1997.

In the South African tests, Bloodhound blazed along the 12-mile desert track that had been painstakingly cleared of all stones by the local Mier community. More than 300 workers removed 16,500 tons of rock from the dry lakebed. It’s the largest area of land ever cleared by hand for a motorsport event, according to the Bloodhound team.

“The track was breathtakingly good,” Tipler said. “It is impeccable, no stones on it at all.”

“With the high-speed testing phase concluded, we will now move our focus to identifying new sponsors and the investment needed to bring Bloodhound back out to Hakskeen Pan in the next 12 to 18 months’ time.”

Warhurst said they have demonstrated that the car is “eminently capable of setting a new world land speed record.”