A suspected bank robber shot a Chicago police officer in the head, badly wounding him, before another officer killed the suspect in a shootout in which a teenage bystander was wounded, authorities said.

The chaotic chain of events began late Tuesday afternoon when two men robbed a bank in the suburb of Des Plaines, police said at a news conference hours later.

A bank teller slipped a tracker into the bag of money and police managed to arrest one of the suspects following a brief foot chase a short time after the robbery. The other suspect stole a couple’s car at gunpoint, though, and drove off toward Chicago with police in pursuit, Des Plaines police Chief William Kushner said. 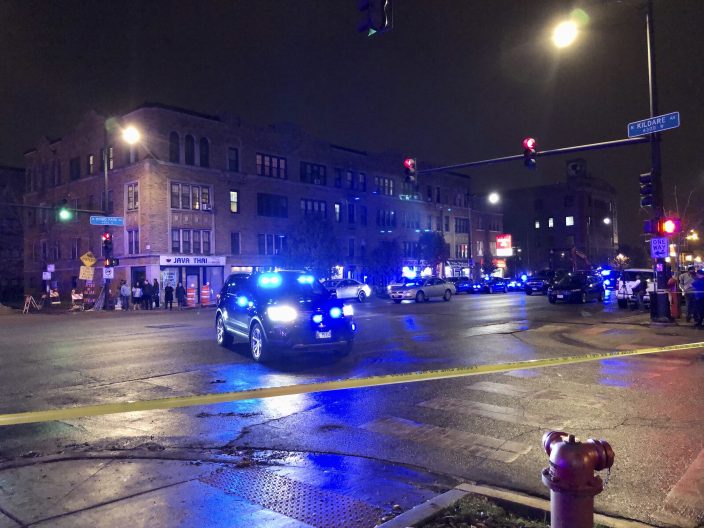 Chicago Police investigate the scene where an officer was shot by a suspected bank robber in Chicago, Tuesday night, Nov. 19, 2019. A 15-year-old boy was also wounded in the shooting, while the suspect was shot and killed. (Sam CharlesChicago Sun-Times via AP)

Chicago officers were waiting when the 32-year-old suspect exited a highway on the city’s northwest side and he fired on their vehicles, wounding a 46-year-old officer before fleeing into a nearby music store, police said.

Des Plaines officers followed the suspect into the store and killed him during a shootout in which a 15-year-old boy who was getting a piano lesson was also wounded, police said. The teen was shot in the arm and stomach and was hospitalized in stable condition. It wasn’t clear whose bullets struck the boy.

The bullet that struck the wounded officer penetrated and exited his skull, Chicago police spokesman Anthony Guglielmi tweeted. The officer’s skull was fractured and he had blood on his brain, Dr. Marius Katilius, of Illinois Masonic Medical Center, said later at the news conference, noting that the officer was in serious but stable condition. 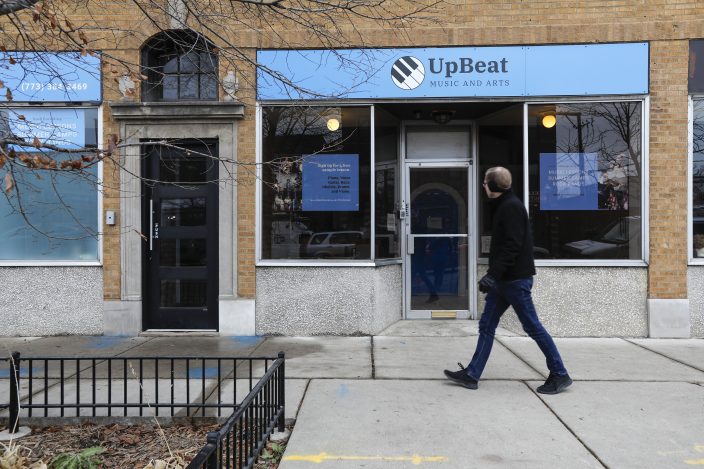 Upbeat Music and Arts in Chicago on Wednesday, Nov. 20, 2019 after a Tuesday police-involved shooting that led to death of suspect, severe injuries to a teen customer at music shop, and police officer suffering severe graze wound to head. (Jose M. OsorioChicago Tribune via AP)

Police didn’t release the names of the two suspects, the teen or the wounded officer, though Chicago police Superintendent Eddie Johnson said the officer has received more than 100 departmental awards “for his exemplary police work.” 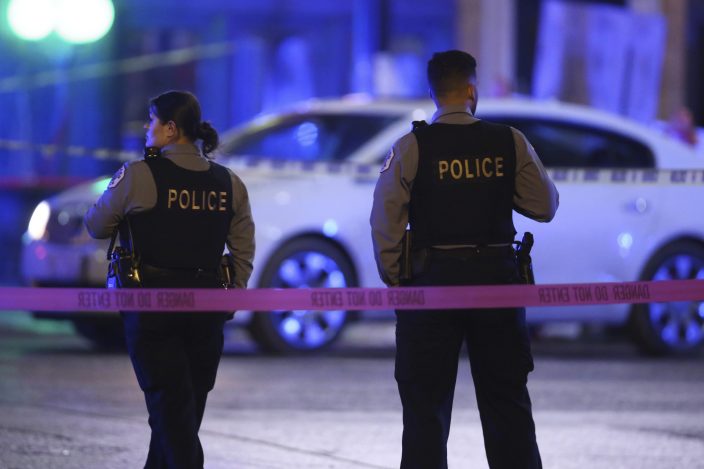 Police work the scene at North Lowell Ave and West Irving Park Road in Chicago on Tuesday, Nov. 19, 2019, where a Chicago police officer was shot and wounded in a gun battle near the Kennedy Expressway. (Chris SwedaChicago Tribune via AP)

Chelsea twice threw away the lead ...