The French government says it will boost funding for the country’s public hospitals, in an effort to end months of protests by doctors and nurses and as more demonstrations and strikes are expected next month over the planned overhaul of the pension system.

The emergency plan unveiled Wednesday will grant public hospitals an additional 1.5 billion euros ($1.6 billion) over the next three years, after years of cost cuts.

The plan includes an annual bonus of 800 euros ($885) for about 40,000 caretakers and nurses with modest salaries living in the Paris region. 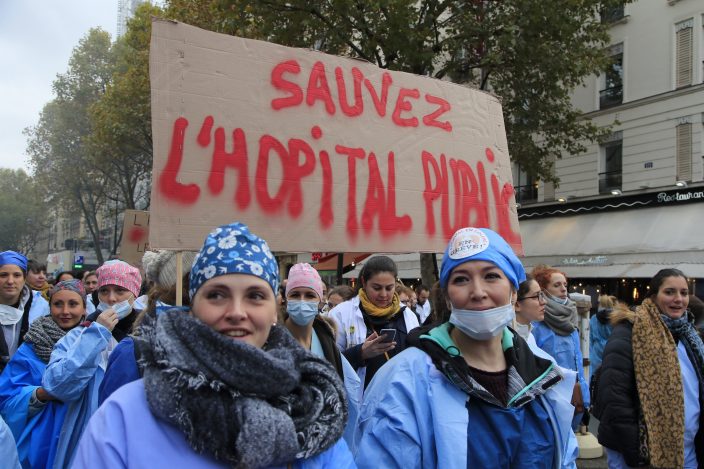 Nurses march during a national demonstration Thursday, Nov. 14, 2019 in Paris. Thousands of exasperated nurses, doctors and other public hospital workers are marching through Paris to demand more staff and resources after years of cost cuts. (AP PhotoMichel Euler)

Public hospitals across France will also get a financial package allowing them to grant employees a bonus of up to 300 euros ($332).

The plan follows a series of protests since March, including a big demonstration last week in Paris involving exasperated nurses, doctors and other public hospital workers.

The French state will also take over a third of the public hospital debt, which amounts to around 30 billion euros ($33.2 billion).

Some unions said the plan was too modest to bring France’s often-praised health care system back to high-level standards.

Several unions — including SNCF rail workers, Paris subway conductors and Air France crews — have called for a nationwide strike on Dec. 5. They fear the changes will lower pensions and delay the retirement age. Others, including students and police unions, joined the movement this week.

Some yellow vest anti-government protesters have also called for demonstrations that day.

Macron said the pension overhaul aims to make the system fairer, simpler and sustainable in the long term.