President Donald Trump sought to defend against accusations that he pushed Ukraine’s president for a political “favor” by making a dubious claim that he had little involvement with the U.S. ambassador who testified in House impeachment hearings.

Trump distanced himself Wednesday from Gordon Sondland, the U.S. ambassador to the European Union who had direct conversations with the president and other top Trump advisers about U.S. policy toward Ukraine.

Some of the remarks on Day 4 of public hearings in the impeachment inquiry by the House intelligence committee and the White House response to it: 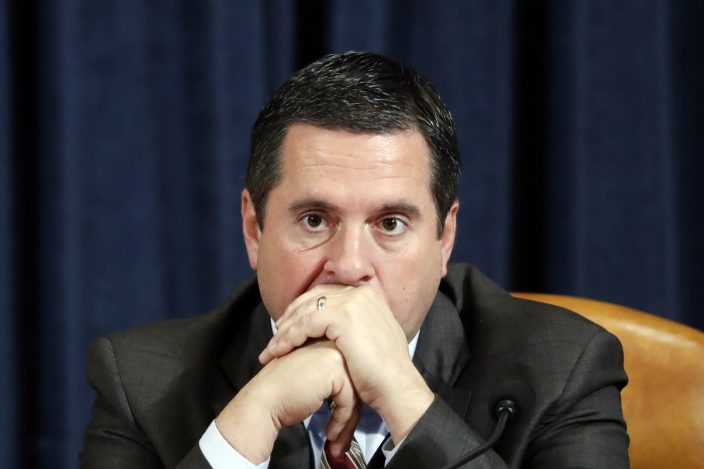 TRUMP: “I don’t know him very well. I have not spoken to him much. This is not a man I know well. He seems like a nice guy, though. But I don’t know him well.” — remarks to reporters.

THE FACTS: That’s not credible. Testimony by several officials revealed that Sondland was in frequent contact with Trump around the time Trump spoke with Ukrainian President Volodymyr Zelenskiy about doing a politically beneficial “favor.” Tim Morrison, the National Security Council’s former Russia and Europe director, told House investigators that Sondland and Trump had spoken approximately five times between July 15 and Sept. 11 — the weeks that $391 million in U.S. assistance was withheld from Ukraine before it was released as Trump pressed for the favor. Morrison said the ambassador “related to me he was acting — he was discussing these matters with the President.” 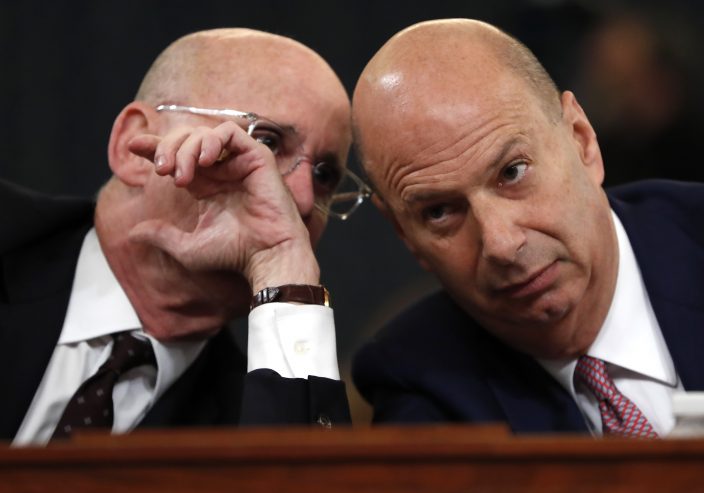 U.S. Ambassador to the European Union Gordon Sondland listens to his attorney Robert Luskin as he arrives to testify before the House Intelligence Committee on Capitol Hill in Washington, Wednesday, Nov. 20, 2019, during a public impeachment hearing of President Donald Trump's efforts to tie U.S. aid for Ukraine to investigations of his political opponents. (AP PhotoAndrew Harnik)

Sondland himself changed his testimony Wednesday to acknowledge more contacts with Trump than previously revealed.

In previous testimony, he failed to disclose calling Trump the day after the July 25 phone call in which Trump pressed Zelenskiy to investigate Democrats, along with Joe Biden and his son, as a “favor.” In testimony Wednesday, Sondland did not challenge the account by David Holmes, an aide to top Ukranian diplomat William Taylor, who told House investigators that he overheard Trump discuss “investigations” in Ukraine. Sondland on Wednesday acknowledged that he opened the July 26 conversation by telling Trump that the Zelenskiy “loves your ass.”

As recently as Oct. 8, Trump had tweeted that Sondland was a “really good man and great American.” 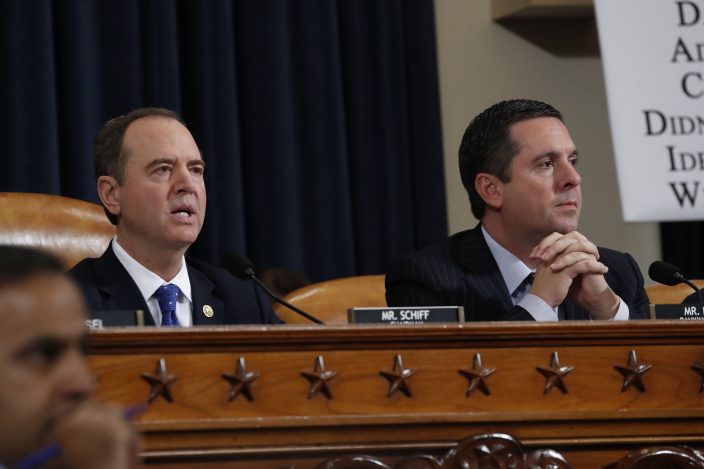 But later on Nov. 8, Trump said that he “hardly” knew Sondland. That came after the ambassador revised testimony to acknowledge he had told an aide to Ukraine’s president in September that military aid would not likely occur until Ukraine made public announcements about corruption investigations.

Sondland donated $1 million to Trump’s inaugural committee before being named the U.S. ambassador to the European Union.

CALIFORNIA REP. DEVIN NUNES, the top Republican on the committee, announcing that he is requesting a subpoena for the whistleblower’s closed-door testimony: “They’ve zeroed in on an anonymous whistleblower complaint that was cooked up in cooperation with Democrats on this very committee.”

THE FACTS: He’s exaggerating. Democrats also would have to agree to a subpoena before one is issued.

The whistleblower did speak to staffers on the Democratic-controlled House intelligence committee before filing the formal complaint that would trigger the impeachment inquiry. But he’s taking a big leap in asserting that Democrats schemed with the whistleblower to cook up the complaint.

Patrick Boland, a spokesman for Democratic Chairman Adam Schiff, said committee staff advised the person to contact an inspector general and to seek counsel. The committee did not get an early look at the complaint.

The whistleblower's lawyer, Mark Zaid, said the person had never met or spoken with Schiff about the matter.

Nunes is pointing to partisan bias in asserting that the whistleblower complaint is false, but key details have been corroborated by people with firsthand knowledge of the events who have appeared on Capitol Hill.

The rough transcript of the July 25 phone call between Trump and Ukraine’s leader also showed that the whistleblower had accurately summarized the conversation in the complaint sent to the acting director of national intelligence.

BONDI: “We’re going to hear what Gordon Sondland has to say today. He was the ambassador to the Ukraine.”

THE FACTS: Sondland is the U.S. ambassador to the European Union, not Ukraine. He testified Wednesday that he and other Trump advisers pressured Ukraine to investigate Democrats “because the president directed us to do so” and that it was a quid pro quo.

California patient is 3rd US case of new virus from Chi ...

A patient in Southern California i ...