He was accused of using his high office to advance his personal political interests. He derided the investigation as a “witch hunt” fueled by “fake news” — an “attempted coup.” He counted on his right-wing base, his hand-picked attorney general and his media savvy to weather the crisis.

Netanyahu’s indictment on charges of bribery, fraud and breach of trust marks the culmination of three long-running corruption cases. In the most serious, he is accused of accepting bribes from a telecom magnate by promoting regulations worth hundreds of millions of dollars in exchange for favorable media coverage on a popular news site owned by the company.

FILE - In this March 25, 2019, file photo, President Donald Trump welcomes visiting Israeli Prime Minister Benjamin Netanyahu to the White House in Washington. Netanyahu’s recent troubles have some parallels to those of his good friend Trump. Both face an array of corruption allegations, both have lashed out at the media and investigators, and both suffered major setbacks this week at the hands of career government officials. (AP PhotoManuel Balce Ceneta, File)

The announcement of the charges coincided with the final day of public impeachment hearings by the U.S. House of Representatives, in which officials provided a mountain of evidence to support allegations that Trump used the powers of his office to pressure Ukraine to investigate former Vice President Joe Biden.

Trump and his supporters have furiously denied any wrongdoing, alleging a deep state conspiracy fanned by a hostile media aimed at reversing the 2016 election.

Netanyahu has adopted similar tactics and even the same language, alleging a conspiracy by police and prosecutors to end the 10-year rule of Israel’s longest-serving prime minister. He has held large Trump-like rallies in recent months and has repeatedly taken to the airwaves and social media, banking on his legendary political skills as the walls closed in. 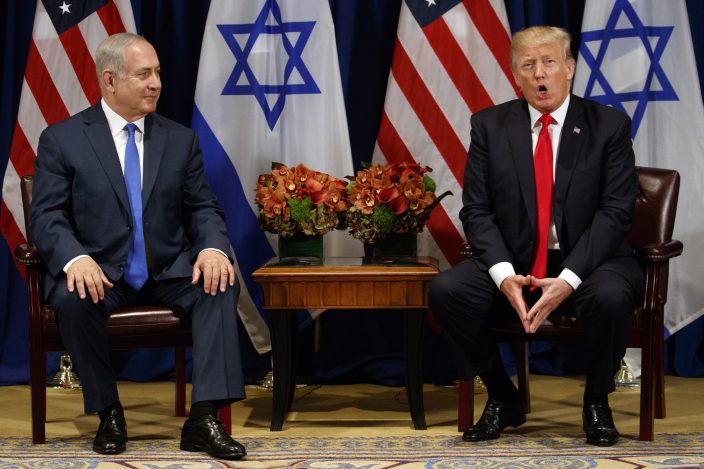 FILE - In this Sept. 18, 2017, file photo, President Donald Trump speaks during a meeting with Israeli Prime Minister Benjamin Netanyahu at the Palace Hotel during the United Nations General Assembly. Netanyahu’s recent troubles have some parallels to those of his good friend Trump. Both face an array of corruption allegations, both have lashed out at the media and investigators, and both suffered major setbacks this week at the hands of career government officials. (AP PhotoEvan Vucci, File)

“Police and investigators are not above the law,” Netanyahu said in an angry televised statement late Thursday, in which he said the country was witnessing an “attempted coup.”

“The time has come to investigate the investigators,” he declared, adopting an oft-used Trump line.

On Thursday, Trump called the Democrats leading the impeachment inquiry “human scum” in a tweet, saying it was the “most unfair hearings in American history.” 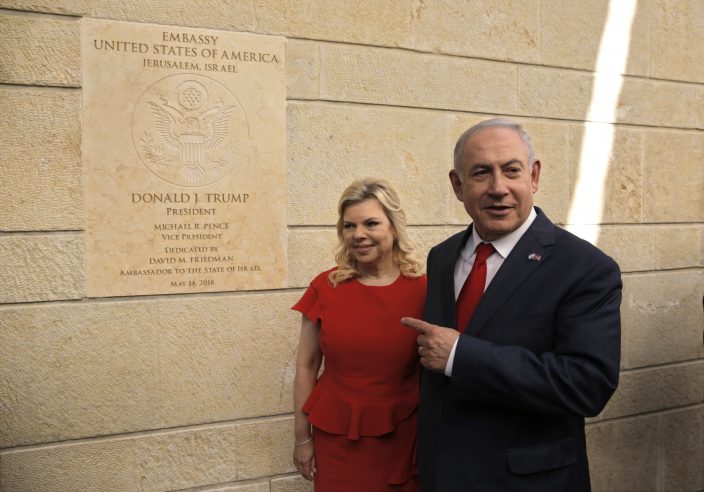 FILE - In this May 14, 2018, file photo, Israeli Prime Minister Benjamin Netanyahu, right, and his wife Sara attend the opening ceremony of the new U.S. Embassy in Jerusalem. U.S. President Donald Trump has sided with Israel on key issues related to the conflict with the Palestinians, and Netanyahu has boasted of his close ties to the American president, saying they have brought about unprecedented gains for Israel. (AP PhotoSebastian Scheiner, File)

Beyond their shared political style, the two leaders have forged a tight alliance. Trump has sided with Israel on key issues related to the conflict with the Palestinians, and Netanyahu has boasted of his close ties to the American president, saying they have brought about unprecedented gains for Israel.

The strategy of rallying their base while lashing out at institutions that sought to curb their power seemed to be working for both men — as it has for other right-wing populists — until elections saw their fortunes change.

Last year’s midterm elections in the United States gave Democrats control of the House and a platform to investigate the administration. It now seems almost certain that Trump will be impeached on a party-line vote, though there is no indication the Republican-led Senate will remove him from office. Sitting U.S. presidents cannot be indicted.

The beginning of the end for Netanyahu may have come in September’s elections, when he and his right-wing allies failed to win enough seats to form a majority coalition. Efforts to form a unity government have failed, in part because of Netanyahu’s legal woes, and the country now appears to be heading toward an unprecedented third election in less than a year.

“We’ve seen populist right-wing governments around the world attack the judiciary, attack the media,” and some have been successful, Anshel Pfeffer, an Israeli columnist and the author of a biography of Netanyahu, told The Associated Press.

“But I think that in Israel and in the U.S., we’ve seen all these pillars of the democratic system fighting back and proving their resilience in the face of this kind of populist leader.”

Netanyahu is not legally required to resign but faces heavy pressure to do so, and the indictment could weigh down his Likud party ahead of new elections.

Like Trump, he enjoys near absolute loyalty within his own party, but that too could change. Hours before the indictment was announced, a senior Likud member suggested there should be a party primary ahead of third elections and that he would be a candidate.

No such challenge has materialized in Trump’s Republican Party, but it’s still a year before the presidential election. As Netanyahu has found in recent weeks, things can change quickly.

“Something was different yesterday,” Sima Kadmon, a columnist for the Yediot Ahronot newspaper, wrote about Netanyahu’s defiant speech. “It simply didn’t work, perhaps because there is nothing alluring about a wounded animal except the smell of its blood.”

“The Netanyahu era has never looked closer to its end than in those moments when he was fighting for it to continue,” he wrote.

Netanyahu had apparently counted on his hand-picked attorney general to shield him from prosecution.

But despite coming under heavy pressure from Netanyahu supporters, who at times held demonstrations outside his home, Avichai Mandelblit personally announced the indictment on all charges Thursday, saying it was “not a matter of politics.”

Despite their setbacks, both Netanyahu and Trump are digging in for a long struggle with their equally determined opponents.

“The indictment in Israel and the expected one in the United States would only contribute to the high level of polarization and mistrust and conflict and confrontation between the two major camps,” said Eytan Gilboa, a professor of political science at Israel’s Bar-Ilan University.

“The results could be similar in the sense of increasing the level of confrontation,” he said.