After two weeks of public hearings, Democrats could soon turn the impeachment process over to the House Judiciary Committee. They’re moving “expeditiously” ahead as House Speaker Nancy Pelosi has instructed.

In the coming weeks, the House intelligence panel will submit a report to the Judiciary panel, and then Democrats will consider drafting articles of impeachment on President Donald Trump’s dealings with Ukraine and the administration’s attempts to block the investigation. The articles could cover matters beyond Trump’s efforts to push Ukraine to investigate Democrats, including special counsel Robert Mueller’s investigation, but no decisions have been made.

There could be several steps along the way, including a Judiciary committee vote, a House floor vote and, finally, a Senate trial. 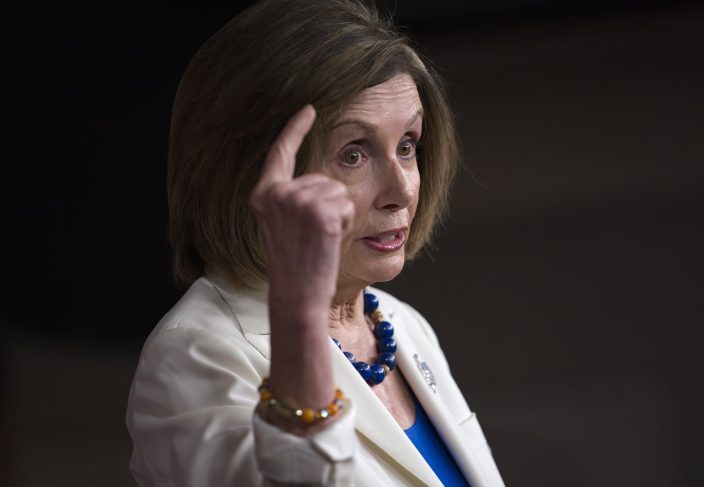 Speaker of the House Nancy Pelosi, D-Calif., talks to reporters as the House Intelligence Committee holds public impeachment hearings of President Donald Trump's efforts to tie U.S. aid for Ukraine to investigations of his political opponents. Pelosi says there is clear evidence that President Donald Trump has used his office for his personal gain. She says doing that "undermined the national security of the United States." (AP PhotoJ. Scott Applewhite)

What’s next in impeachment:

Democrats on the House intelligence committee believe they have enough evidence to write a report and move forward. But it’s still unclear whether they will hear any last-minute testimony. 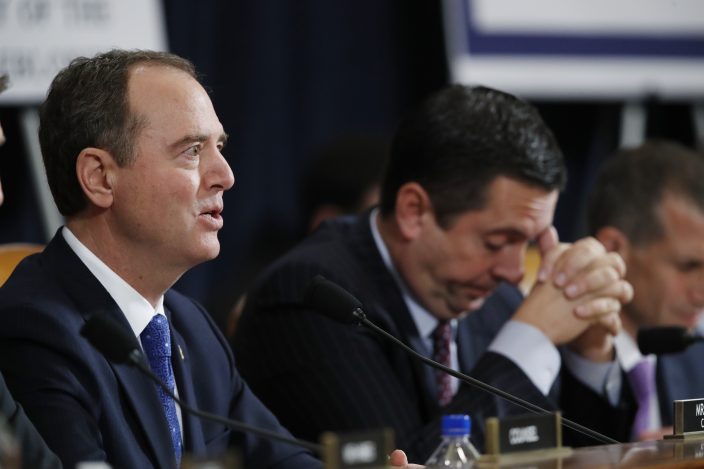 Democratic House intelligence committee Chairman Adam Schiff said Sunday he won’t foreclose the possibility of his committee undertaking more depositions and hearings in the impeachment inquiry of Trump. Schiff said on CNN’s “State of the Union” that his committee continues to conduct investigative work, but he won’t let the Trump administration stall the inquiry.

Schiff’s staff and others are compiling the panel’s findings to submit to the House Judiciary Committee, which is expected to open its own hearings to consider articles of impeachment and a formal recommendation of charges. He said his committee may need to file addendums to its report so that the Judiciary Committee can move ahead.

Democrats have said they don’t want to get tied up in lengthy court battles to force those witnesses to cooperate with subpoenas. But they could still hear testimony if one of them changed their mind, or if other key witnesses emerged.

Time is running short if the House is to vote on impeachment by Christmas, which Democrats privately say is the goal. The intelligence panel is expected to spend the Thanksgiving week writing, and maybe even completing, a report of evidence gathered through more than six weeks of closed-door depositions and public hearings.

Once the report is done, the panel could vote to pass it on to the House Judiciary Committee. That could happen as soon as the first week of December, when lawmakers return from the Thanksgiving break.

Pelosi has instructed the intelligence panel, along with other committees that have investigated Trump, to submit evidence to the House Judiciary Committee. That panel is then expected to hold hearings and vote on articles of impeachment — a process that could take up the first two weeks of December.

The articles of impeachment are expected to mostly focus on Ukraine, though discussions continue. Democrats are considering an overall “abuse of power” article against Trump, which could be broken into categories like bribery or extortion. The article would center on the Democrats’ assertion, based on witness testimony, that Trump used his office to pressure Ukraine into politically motivated investigations.

The Judiciary panel could take several days to debate the articles and then vote on them — sending impeachment to the House floor, where they could immediately be called up for consideration. Debate on impeachment would be handled similarly to any other bill or resolution.

If articles of impeachment reach the House floor, Democrats will be looking to peel off Republicans to make the vote bipartisan. So far, however, it appears few, if any, Republicans will break ranks. Not a single Republican backed the resolution launching the impeachment hearings.

Once an impeachment vote is done, Democrats would appoint impeachment managers for a Senate trial.

House Democrats are hoping to be finished with an impeachment vote by Christmas, sending articles to the Republican-controlled Senate for a trial in 2020. Unless political dynamics change, Trump is expected to have the backing of majority Republicans in that chamber to be acquitted.

It’s still unclear how long a trial would last, what it would look like or what witnesses might be called. Top White House officials met Thursday with Republican senators to discuss strategy but made no decisions about the length of a trial or other tactics, two people familiar with the session said.

Participants in the meeting expressed more interest in voting as soon as they have the 51 votes needed to acquit Trump than in setting a specific timetable for the proceedings, according to one Senate GOP aide.

That aide and a senior White House official said a trial lasting two weeks was discussed, but not agreed to. The aides spoke on condition of anonymity to describe a private meeting.

EDITOR’S NOTE: Ryan Zimmerman is a ...

Brooklyn is dark except for the st ...