If you’re lucky enough to be invited to a dinner party hosted by Questlove, be aware that nothing has been left to chance.

The guest list has been carefully chosen, as have all the dishes. The music starts off with piano-heavy tunes and then builds as the evening goes on. The amount and quality of the booze is also carefully staged.

“I think now I have it down to a science. You have to start off mellow and go to your climax,” said Questlove. “Usually my parties start at 7 o'clock. By 10 o'clock, it's at its height. And then when it's filtering out around 12:30, then usually the 10 of us left go out to get pizzas and burgers.” 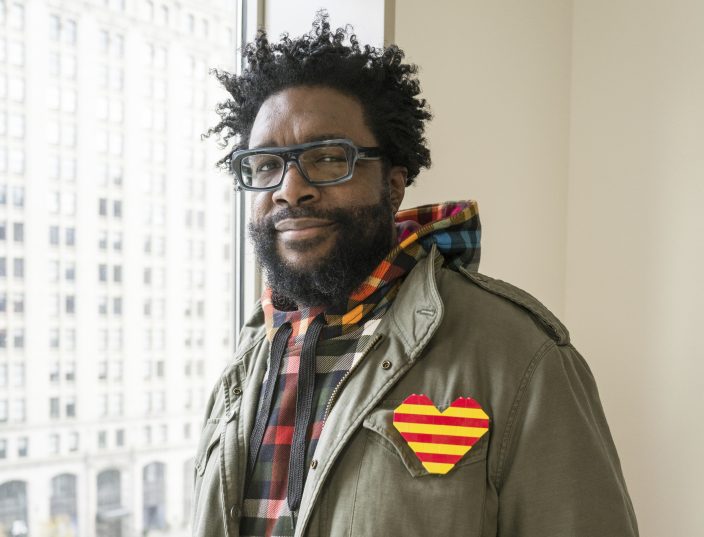 This Nov. 19, 2019 photo shows Questlove posing for a portrait in New York to promote his cookbook “Mixtape Potluck.” (Photo by Matt LicariInvisionAP)

If you’re one of the stragglers, there’s a good chance you’ll be hanging with a celebrity. Questlove attracts an eclectic fanbase, from musicians like Q-Tip and David Byrne, to foodies like Padma Lakshmi and Eric Ripert, to actresses like Gabrielle Union and Zooey Deschanel, and artists like Tom Sachs and Dustin Yellin.

Now the drummer of the hip-hop group The Roots, as well as a DJ, a producer, author and radio host is revealing some of his secrets in his new book, “ Mixtape Potluck.” It includes crowd-pleasing recipes from more than 50 friends and advice on how to organize the music, food and guests.

“For me, the whole goal of ‘Mixtape Potluck’ is to serve as a guide to have better social functions. Oftentimes, I meet artists that are islands on their own and I tell them all the time, ‘Find your flock, gather your flock,’” he said. “We live in such a singular society now that really doesn't encourage the idea of collaborating or even social gatherings anymore.”

The hope is that the party’s guests will mingle and learn about each other, sparking partnerships and alliances. He likens it to high-level speed dating.

Questlove, born Ahmir Thompson, said the seed of the book sprouted more than 20 years ago when The Roots were trying to lure musicians to collaborate in Philadelphia. The best bribe turned out to be food, “the proverbial pie on the windowsill that drew everyone in.” They even convinced their record label to add a chef to the budget.

“For me, music and food and creatives go hand-in-hand. So, some 20 plus years, later, I just now call them food salons. And instead of using food to attract musicians to create music, I’m kind of doing the opposite where music is now in the background.”

To inspire his “Mixtape Potluck” celebrities on picking out their recipes, Questlove sent along a song that he felt best captured their unique creative energy. Martha Stewart got a Snoop Dogg tune, while vegetarian Natalie Portman got “Vegetables” by The Beach Boys.

Jimmy Fallon, who works with The Roots on “The Tonight Show Starring Jimmy Fallon,” got Bruce Springsteen’s “Hungry Heart” and, in turn, offered his recipe for Air-Fried Chicken Burgers. “Giving him a Bruce Springsteen song is very easy because in his heart, there's a Jersey boy dying to come out in Jimmy Fallon’s soul.”

Questlove relied on his astounding knowledge of music. He admits to being a little ADD and is obsessed with making lists. He has dozens of Spotify playlists and challenges himself to compile things like 100 songs about the color blue or 100 songs in which the title is never sung. His deep insight has led him to produce the AMC show, “ Hip Hop: The Songs That Shook America.”

To create the book, Holly Dolce, the executive editor at Abrams Books, said Questlove was involved in every aspect: the fonts, the photography, even the metallic sheen of the cover. “He’s like a really great director. He’s interested in every part of making the book,” she said. “He goes off and really makes it all happen.”

In many ways, although Questlove doesn’t really cook himself, he assembles the ingredients for a good party like any good chef — music, chefs, lighting, drinks and guests. “I'm not into randomness and throw the noodle at the wall and see what sticks, because often that can be a disaster,” he said.

In the book, one of the strangest-sounding offerings is for Chocolate Chili from Maya Rudolph, which combines Fritos, chili powder, beans, tomato, cheddar and chocolate. Questlove said despite the combination of seemingly odd flavors, the dish ended up one of his top five favorite recipes.

“It's 2019, the idea of taboo mixing — be it socially, culinary, music-wise, in our entertainment, or politically — shouldn't really shock anyone. I mean, we commonly have accepted the idea of salty caramel, right? Yeah. I'm certain back in 1984, like, ‘Wait, you want to put salt and chocolate together? No way.’”

Dolce, who works in the world of food full-time, said she’s impressed by Questlove’s knack for knowing what are the interesting dishes and who are the chefs to watch. “He just has his finger on the pulse in a way that is almost mind-blowing,” she said.

Questlove hopes readers will be inspired to host their own potlucks and offers some advice for good partying: Use multiple music speakers, throw out some unexpected songs, offer guests games and keep the lighting low but not too low. And be flexible. Once, the singer Bjork came an hour early for one of his parties. Questlove was stunned to see her helping the waiters set up the tables.

For major shippers, 2019 ended on a sour note