Butler scored eight consecutive points in 55 seconds to begin the extra session as the Heat recovered after blowing a seven-point lead in the final two minutes of the fourth quarter.

Bam Adebayo scored 18 points, Justise Winslow had 17 and Kelly Olynyk 16 as the Heat snapped the Raptors’ season-high winning streak at seven games, and became the first visitor to win north of the border this season. 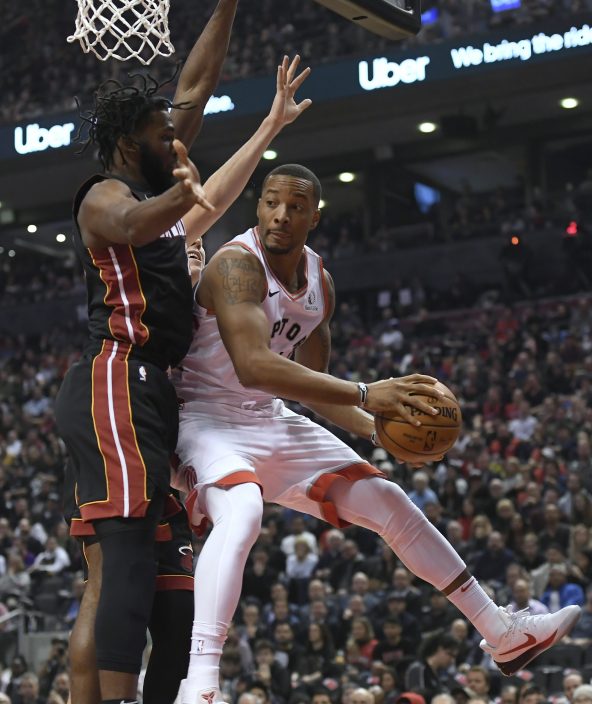 Pascal Siakam had 15 points and 12 rebounds, Norman Powell scored 23 points and Fred VanVleet had 19 for Toronto, which had won a franchise-record nine straight home games to begin the season.

The Raptors missed all nine of their field goal attempts in overtime.

Luka Doncic scored 15 of his 33 points in the third quarter and grabbed 18 rebounds in just 28 minutes to power Dallas over New Orleans.

Doncic shot 9 of 18 from the field, making five 3-pointers, and hit 10 of 13 free throws to lead the Mavericks to their eighth victory in the last nine games.

Doncic had 12 points the first quarter and then broke open a three-point game by scoring 15 of the Mavericks’ 25 points in the final 9:18 of the third, when Dallas built a 84-75 lead. Two of Doncic’s jumpers came from at least 25 feet with no defender in his face.

Dallas led by as many as 18 points in the fourth quarter and coasted home.

Seth Curry added 19 points off the bench for the Mavericks, and Tim Hardaway Jr. and Maxi Kleber each had 12.

Bradley Beal scored 42 points for the Wizards, who have lost five of six.

Markelle Fultz added a career-high 20 points for the Magic, who have won three of four after earning just their second road victory of the season.

Davis Bertans added 21 points and Isaiah Thomas scored 20 for Washington. The Wizards were without starting center Thomas Bryant, who was diagnosed with a stress reaction in his right foot Tuesday and will be re-evaluated in three weeks.

Griffin played just 24 minutes and was 8 of 13 from the field, including 6 of 7 from deep. Drummond played 31 minutes as Detroit's starters were on the bench for the fourth quarter.

Griffin scored 16 points in the first quarter with four 3-pointers. Detroit hit 10 3-pointers in the first half and built a 57-38 lead, a margin that steadily grew throughout the game and reached 35 in the fourth quarter.

Cleveland has lost 10 of 11. Collin Sexton scored 22 points, and Tristan Thompson had 10 points and 14 rebounds.