Stefan Noesen celebrated his return to the NHL with his first goal of the season and the banged up Pittsburgh Penguins handed the St. Louis Blues their first regulation road loss since before Halloween with a 3-0 victory on Wednesday night.

Noesen, a five-year veteran who signed a minor-league deal with the Penguins in the offseason, pounded home a rebound off a Jared McCann shot with 39 seconds left in the second period for his first goal since last March when he played for New Jersey.

Teddy Blueger scored 39 seconds into the game to give the Penguins the early lead and Alex Galchenyuk's second of the season early in the third period provided Tristan Jarry all the cushion he needed. 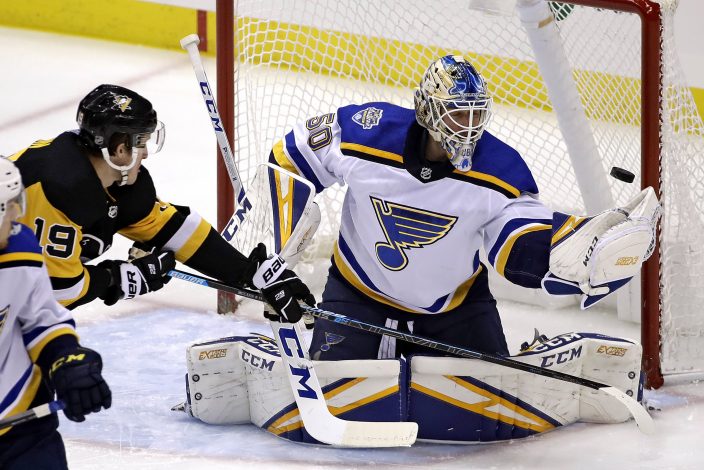 Jarry stopped 28 shots to post his third career shutout as the Penguins drew a measure of revenge after getting blown out by the defending Stanley Cup champions last weekend.

Jordan Binnington finished with 30 saves for St. Louis, but the Blues saw their 10-game road point streak end against a patchwork Pittsburgh lineup missing a handful of key contributors. Forwards Sidney Crosby, Nick Bjugstad, Bryan Rust and Patric Hornqvist and defenseman Brian Dumoulin all out of the lineup due to injuries and defenseman Jack Johnson was a late scratch after falling ill before the opening faceoff.

Pittsburgh, however, survived thanks in large part to Jarry, who withstood a major second-period push from the Blues to hand St. Louis its first regulation road loss since Oct. 26. The Blues were one win shy of tying the franchise record for longest road point streak set during the 1999-2000 season but fell behind early and never caught up. 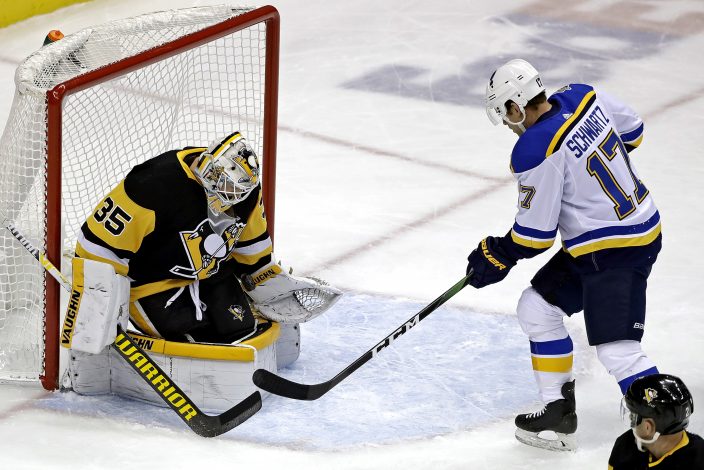 Blueger gave the Penguins the early lead when he deflected Marcus Pettersson's point shot over Binnington's left shoulder for his third of the season and first since Oct. 22. Pittsburgh peppered Binnington relentlessly but Binnington hung in there and St. Louis responded with sustained pressure in the second against a group of Penguins defensemen that included Chad Ruhwedel, Juuso Riikola and Zach Trotman — who had played 25 games combined coming in.

Jarry preserved the lead thanks to a handful of sharp saves and the Penguins received a late boost when the goal-scoring touch that propelled Noesen's hot start in the minors followed him to the NHL. McCann fired a low, hard shot from the left circle that smacked off Binnington's pads and right to Noesen on the doorstep. He slammed the puck into the empty net to make it 2-0 and celebrated with a guttural scream while getting mobbed by his linemates.

Galchenyuk, who had scored just once in his first 18 games with Pittsburgh after being acquired from Arizona in a blockbuster offseason trade in exchange for popular forward Phil Kessel, broke in alone on Binnington and stuffed the puck over Binnington's blocker 4:59 into the third. Jarry did the rest while winning for the fourth time in his last five starts.

NOTES: St. Louis scratched D Robert Bortuzzo and F Austin Poganski. ... Rust skated on Wednesday morning and could be nearing a return after getting hurt during practice on Friday. ... St. Louis went 0 for 4 on the power play. The Penguins were 0 for 5 with the man advantage.

Penguins: Faces Arizona on Friday night for the first time sending Kessel, who played a pivotal role in the Pittsburgh teams that won consecutive Stanley Cups in 2016 and 107, to the Coyotes in June.