The Dallas Mavericks showed Wednesday night they are much more than Luka Doncic.

Dwight Powell scored 24 points on 9-for-9 shooting from the field, Jalen Brunson ignited a fourth-quarter rally with 14 of his 16 points in the period and the Mavericks beat the Minnesota Timberwolves 121-114.

Powell and Brunson both had season highs as the Mavericks won for the ninth time in 10 games. 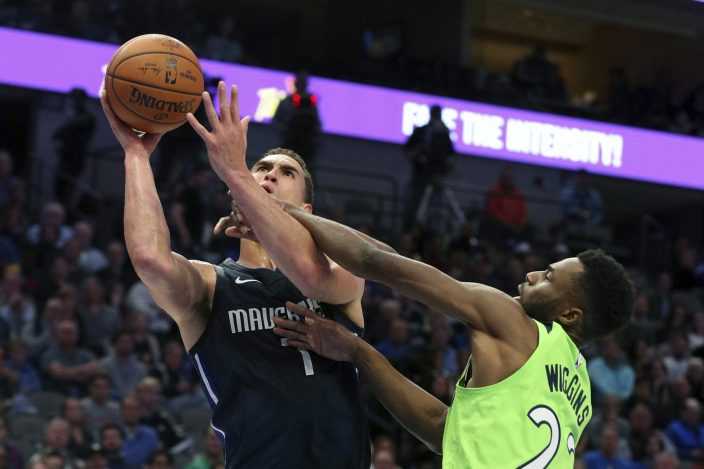 Dallas Mavericks forward Dwight Powell (7) gets fouled by Minnesota Timberwolves forward Andrew Wiggins (22) as he puts up a shot in the second half of an NBA basketball game Wednesday, Dec. 4, 2019, in Dallas. (AP PhotoRichard W. Rodriguez)

Going into the second night of a back-to-back, Mavericks coach Rick Carlisle said, “Depth is going to be our calling card if we’re going to be good.” Then his team went out and proved his point on a night when Doncic struggled with 8-for-22 shooting and was assessed a technical foul in the third quarter.

With five reserves on the floor to start the fourth quarter, Dallas was 7-of-9 on 3s after hitting only four of its first 27. Brunson made two, including the one that put Dallas ahead to stay at 94-93 with 7 minutes to play.

“A little opportunity. A little bit of preparation. I just felt it going,” Brunson said. 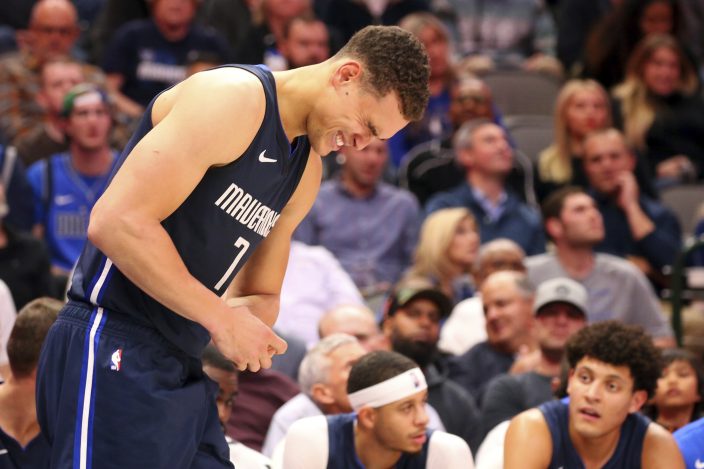 Dallas Mavericks forward Dwight Powell (7) winces as he holds his arm after a foul against the Minnesota Timberwolves during the second half of an NBA basketball game Wednesday, Dec. 4, 2019, in Dallas. (AP PhotoRichard W. Rodriguez)

Maxi Kleber made two 3s and Justin Jackson another before Doncic came back into the game and made his only 3 off an assist from Brunson to put the Mavs up 106-98. Doncic, whose frustrations with the officiating boiled over when he was given a technical foul by referee David Guthrie with 2:26 left in the third quarter, looked skyward as if to show relief when the shot swished through.

Doncic finished with 22 points, seven rebounds and six assists – all below his season averages. It was the first time since Oct. 29 – a stretch of 17 games – when someone other than the 20-year-old standout led Dallas in scoring.

“We have amazing players on this team,” Doncic said. “Anybody can do anything.” 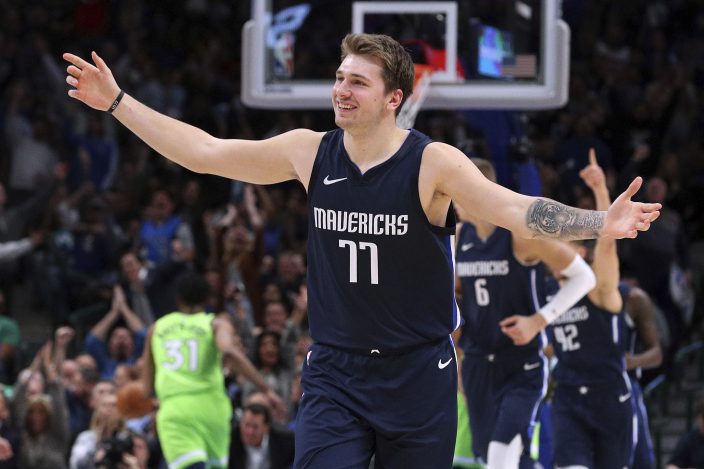 Dallas Mavericks forward Luka Doncic (77) reacts after a 3-pointer during the fourth quarter against the Minnesota Timberwolves in an NBA basketball game Wednesday, Dec. 4, 2019, in Dallas. (AP PhotoRichard W. Rodriguez)

Karl-Anthony Towns and Andrew Wiggins had 26 points apiece for the Timberwolves, and Robert Covington added 22.

“I think we played solid through three quarters,” Wiggins said. “But in the fourth quarter, we let them get too comfortable.” 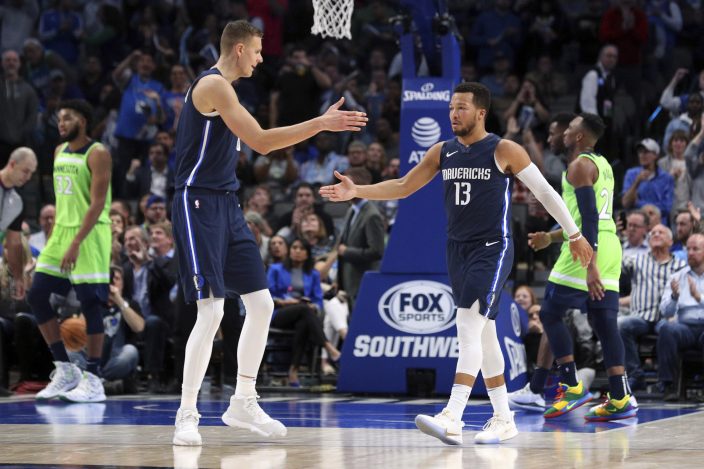 Dallas Mavericks forward Kristaps Porzingis (6) celebrates a shot by Jalen Brunson (13) during the second half of an NBA basketball game against the Minnesota Timberwolves, Wednesday, Dec. 4, 2019, in Dallas. (AP PhotoRichard W. Rodriguez)

Timberwolves: Forward Jake Layman remains out with a sprained big toe on his left foot. Coach Ryan Saunders said Layman was not with the team as it begins a four-game trip and didn’t have a timetable for his return.

Mavericks: Powell’s 14 first-half points were a career high in a half for the sixth-year center and he finished just two short of his career high after leaving the game midway through the fourth quarter with a wrist injury. 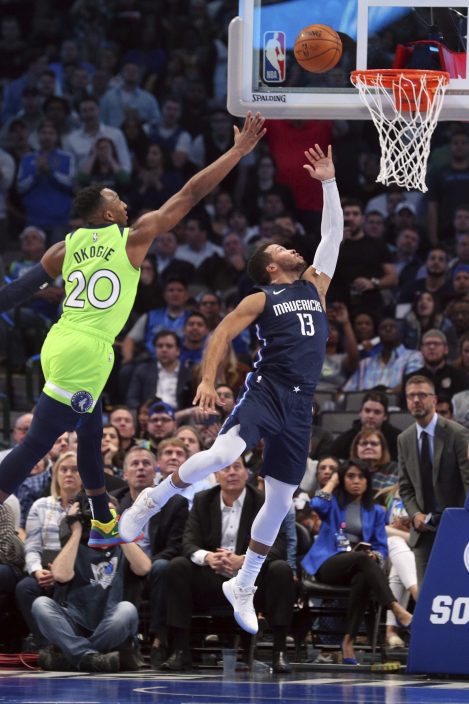 Calling this a below-average game for Doncic only emphasizes the impressive numbers he’s put up in his second year. He is currently riding a streak of 17 consecutive games with at least 20 points, five rebounds and five assists. That tied Russell Westbrook’s streak as the second-longest since the ABA-NBA merger (1976-77). Only Michael Jordan (18 games in 1988-89) has a longer streak.

“When he’s on the bench, he’s up, cheering on his teammates with the best of them,” Carlisle said of Doncic. “He was really into the game when our second unit got it going in the fourth.”

Minnesota had won four in a row on the road and was 7-2 away from Target Center entering Wednesday. The Wolves will need more road magic with this contest starting a stretch of eight road games in 11 days, all against Western Conference teams.

“We’ve got to find consistency playing for 48 (minutes),” Towns said.

Powell finished just two short of a career high in points when he had to leave the game with 4:47 left in the fourth when he injured his left arm in a collision with Wiggins and his own teammate Kristaps Porzingis. He was diagnosed with an arm contusion and X-rays were negative.

“It was just a really awkward play,” Powell said. “I felt like my arm got stuck in a revolving door. It didn’t feel good but thankfully it’s not broken.”

Demonstrators in Berlin called for ...