The Mekong River has recently acquired an aquamarine color that may beguile tourists but also indicates a problem caused by upstream dams, experts in Thailand say.

The river usually has a yellowish-brown shade due to the sediment it normally carries downstream. But lately it has been running clear, taking on a blue-green hue that is a reflection of the sky. The water levels have also become unusually low, exposing sandbanks that allow the curious to stand in the middle of the river.

Low water levels pose an obvious problem for fishermen and farmers, but experts say the decline in sediment exposes a different danger that can result in greater erosion of the river’s banks and bed. 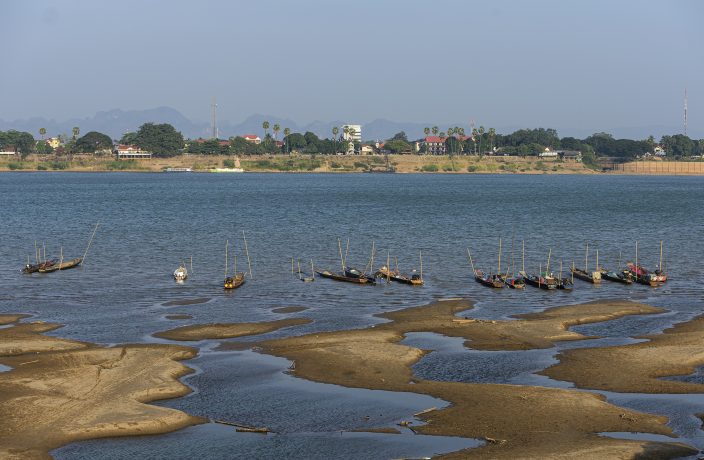 In this Wednesday, Dec. 4, 2019, photo, fishing boats are moored in Mekong River, which has turned blue instead of its usual muddy color, in Nakhon Phanom province, northeastern Thailand. Experts say the aquamarine color the Mekong River has recently acquired may beguile tourists but it also indicates a problem caused by upstream dams. The water usually is a yellowish-brown shade due to the sediment it normally carries downstream. But lately it has been running clear, taking on a blue-green hue that is a reflection of the sky. The water levels have also become unusually low, exposing sandbanks in the middle of the river. (AP PhotoChessadaporn Buasai)

The experts and people living along the river blame a large hydroelectric dam upstream in Laos that began operating in October for contributing to both problems, though rainfall has also been sparse.

Around 70 million people depend on the Mekong River for water, food, commerce, irrigation and transportation. Critics charge that large-scale development projects such as the Xayaburi dam dangerously disrupt the region's ecology.

The dam blocks much sediment from moving further downstream, which accounts for the water becoming clear, said Pravit Kanthaduang, chief of the fishery office at Bueng Khong Long, a district in Thailand's Bueng Kan province. Less sediment means less nutrition for plants and fish in the river, threatening the ecological balance, he said.

With less sediment, the water also has more stream power, a phenomenon known as "hungry water," said Chainarong Setthachau of the Faculty of Humanities and Social Science at Mahasarakham University in Thailand's northeast who has studied changes in the Mekong's ecology for the past two decades.

"The current has less sediment, which unleashes energy onto the river banks downstream. This so-called 'hungry water' will cause much more erosion to the banks, uprooting trees and damaging engineering structures in the river," Chainarong said.

The dam's developers have denied that they were responsible for low water levels that some critics tied to trial runs of the generators that began in March. In October, the Xayaburi Power Co. Ltd. said the project has spent more than 19.4 billion baht ($640 million) to mitigate negative impacts on the environment, including the building of outlets for sediment passage and flow and facilities to allow the passage of fish. The plant's total cost was $4.47 billion.

Daeng Pongpim, from a farming family that used to fish in Ta Mui village in Ubon Ratchathani province, lives 800 kilometers (500 miles) downstream from the Xayaburi dam, but said she still believes it is responsible for the river’s recent unusual condition.

"I am 67 years old and have never seen anything like it before. What makes me concerned the most is the low level of the water. Now, we are in early winter, the water level should not be this low. I can't imagine how hard it could be for us at the height of the dry season, in March and April."

Chaiwat Parakun, who lives 200 kilometers (125 miles) downstream from the dam, said he abandoned his fishing gear several years ago because of the declining amount of fish available to catch. He now has a tourism business.

"The Mekong has gradually lost its abundance. People who depend on the river like us could sense it many years ago. But that was nothing like the effects from Xayaburi. We cannot figure out how we can live with this degraded environment," he said.