Democratic presidential candidate Pete Buttigieg is applauding African American leaders in his home city for “speaking their truth” after a protester disrupted an event held to demonstrate black support for the mayor in South Bend, Indiana.

African American leaders held an event Wednesday night to dispute the notion that Buttigieg lacks support from the black community in South Bend, the South Bend Tribune reported. Video shows a protester interrupting speaker Sharon McBride as he shouts, “Who chose these people as black leaders?” He then takes the microphone and yells repeatedly, “This is a farce!"

The man was wearing a T-shirt that said “Black Lives Matter South Bend,” the newspaper reported. 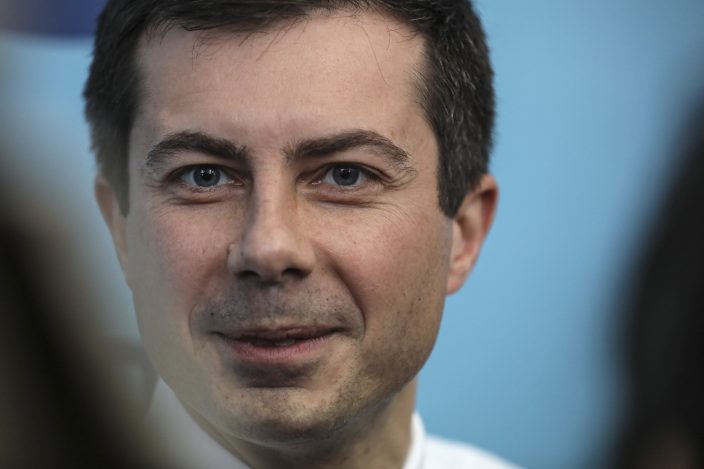 Buttigieg has faced continued questions about his ability to appeal to African-American voters, a key constituency of the Democratic primary electorate, as he maintains a spot in the top tier of the primary field. Tensions in South Bend flared over the summer after the shooting death of an African American man by a white police officer, presenting Buttigieg with some of the toughest moments of his White House campaign.

Speaking to reporters after a campaign event Thursday in Henniker, New Hampshire, Buttigieg seemed to indicate that the protester may have been affiliated with one of his 2020 rivals.

“We can't control if somebody from another campaign comes and disrupts it,” Buttigieg said.

“Most importantly, there was a lot of folks speaking their truth,” Buttigieg continued. “And we're going to continue to make sure we're elevating South Bend voices because the African Americans who know me best in our community are often the best to speak to both who I am and what we've done together.”

Whether the man involved in the disruption was actually linked to another campaign wasn’t clear. On Wednesday night, Buttigieg's senior adviser and spokeswoman, Lis Smith, tweeted, “It’s deeply depressing that @BernieSanders’ supports have gone from harassing @PeteButtigieg’s staffers of color online to harassing our supporters of color in real life, but here we are.”

“This country needs a serious and respectful debate over the major crises that we face,” Shakir said.

Buttigieg, who is gay and married to his husband, Chasten, also responded to criticism over a past dealing with the Salvation Army.

The Salvation Army has faced long-running criticism for its approach to LGBTQ rights, with a commissioner of the Christian aid organization signing a 2012 letter that opposed same-sex marriage. The fast-food restaurant Chik-fil-A, a favorite of conservatives, said this month that its foundation would discontinue support for the Salvation Army amid questions about the group’s stance on same-sex marriage.

However, the Salvation Army has pushed back at its critics’ portrayal of the group as discriminatory. Its national commissioner touted its efforts to aid needy LGBTQ people in a column last month, writing that criticism of its leaders’ belief in “a traditional Biblical definition of marriage” imperils the Salvation Army’s “ability to serve millions in need.”

“We were raising money to help poor people," Buttigieg told reporters. "And there's a lot of questions and disagreements that I have with any number of organizations that I will also partner with in order to do something good, and that's the case with the Salvation Army Red Kettle Ring Off that I participated in as mayor.”

Associated Press writers Will Weissert in Washington and Elana Schor in New York contributed to this report.

Aid ship with 403 migrants rescued off Libya docks in I ...

A European organization that opera ...

Probe of police shooting could revive scrutiny of Buttigieg