A tropical breeze replaced the raging wind and made golf a lot easier for Patrick Reed, Tiger Woods and just about everyone else Thursday in the Hero World Challenge.

Reed took advantage of the back nine at Albany Golf Club for the second straight day. He was tied for the lead until making six birdies over his last 10 holes for a 6-under 66 that gave him a three-shot lead over U.S. Open champion Gary Woodland. 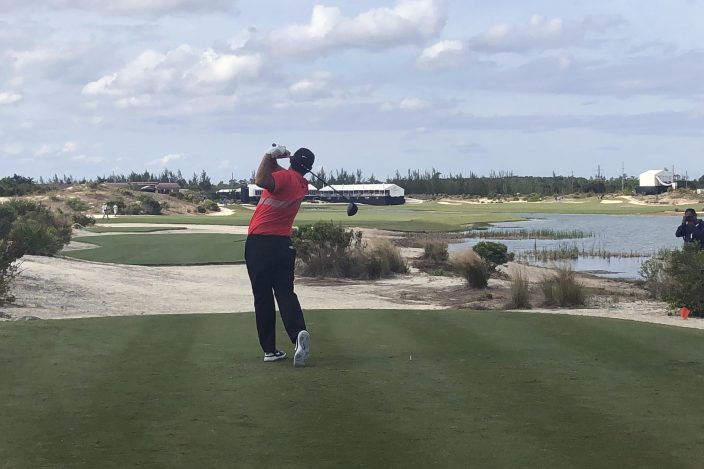 Patrick Reed tees off on the par-5 ninth hole at Albany Golf Club during the second round of the Hero World Challenge in Nassau, Bahamas, Thursday Dec. 5 2019. (AP PhotoDoug Ferguson)

Woods, playing for the first time since he won in Japan for his record-tying 82nd career victory on the PGA Tour, kept a clean card to match Reed's 66 and remain six shots behind. Unlike the opening round, when Woods started poorly and ended even worse to wipe out a good back nine, he played bogey-free and made up ground on the back nine.

It started with a 6-iron that hopped onto the green at the par-5 11th and rolled 7 feet away for an eagle. He followed with a 7-iron to 8 feet for another birdie. He didn't make up any ground on Reed, but he at least cut down on the number of players ahead of him as he tries to win his holiday event for the first time since 2011. 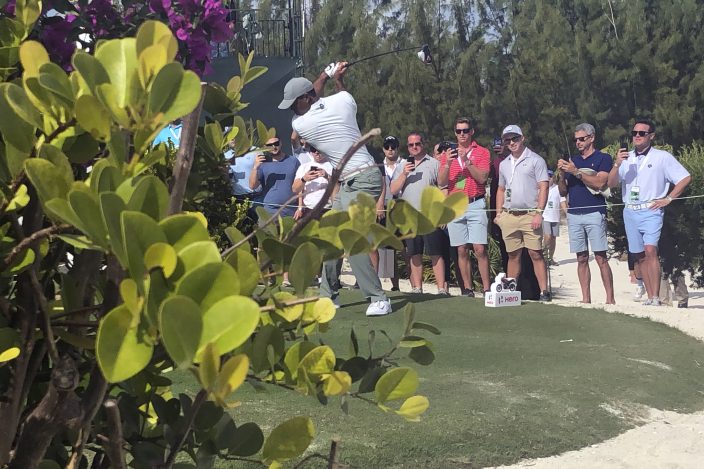 Tiger Woods hits on the par-5 11th hole on his way to an eagle at Albany Golf Club during the second round of the Hero World Challenge in Nassau, Bahamas, Thursday Dec. 5 2019. Woods shot 66. (AP PhotoDoug Ferguson)

“I just think it was less windy,” Woods said. “It was a little bit easier today.”

Once he got through the front nine, where he spent much of the time scrambling for pars outside of a lone birdie, Woods didn't miss too many shots coming in. A week before he heads over to Australia as the playing captain for the U.S. team in the Presidents Cup, the game looked to be in order.

Woods attributed that to the minor knee surgery in late August to repair cartilage damage.

Woodland, who makes his Presidents Cup debut next week, lost ground with consecutive bogeys that left him six shots behind at one point. He fixed that by finishing with three straight birdies for a 69 and will be paired with Reed again on Friday for the third round.

The tournament ends Saturday so the American team can board a charter to Melbourne, arriving on Monday. Dustin Johnson, who withdrew from the Bahamas to have one more week for his knee to recover, plans to fly in on Saturday to join the rest of the Americans on the charter.

Defending champion Jon Rahm also had a 66 to match the low round of the day, leaving him four shots behind with Henrik Stenson, who had a 67.

Woods was in the group at 6-under 138 along with Rickie Fowler and Justin Thomas, who each shot 69. Fowler, who got married during his offseason and then missed a tournament recovering from food poisoning, is playing for the first time since the Tour Championship on Aug. 25.

All but three players broke par, and the high score belonged to Bubba Watson and Chez Reavie at 73.

Reed is playing this week with a set of prototype irons he has been working on, and he's keeping it private until the new year. Golf Channel reported earlier this week that the company was Japan-based Grindworks. He also has a new putter.

They appear to be working, especially at the end. Coming off a bogey, Reed drilled his approach from 201 yards into 3 feet on the final hole for a birdie to stretch his lead.

Woodland was happy to be within three, getting a bad break on the 14th and letting it bother him during another bogey. The closing three birdies changed his outlook.

“It was huge. I needed that," he said. “Got me back in the golf tournament and gave me a chance for this week.”

Woodland leads in the Bahamas as Tiger gets within 2 shots

Henrik Stenson, Jon Rahm tied for lead in the Bahamas

Reed, Cantlay lead as Tiger triples his way to bottom