Jonathan Toews scored 54 seconds into overtime and the Chicago Blackhawks recovered after blowing a three-goal, third-period lead to beat Boston 4-3 on Thursday night and end the Bruins' eight-game winning streak.

Toews picked up the puck after a turnover by David Pastrnak and skated in on Tuukka Rask before backhanding it between the goalie's legs. The crowd, which thought Pastrnak had been tripped, began showering the ice with garbage.

Robin Lehner made 37 saves for the Blackhawks, who had lost six of their previous seven games. Ryan Carpenter and Dylan Strome scored 37 seconds apart at the end of the first period, and Alex DeBrincat scored off the opening faceoff of the third period to make it 3-0 — the first three-goal deficit Boston had faced all season. 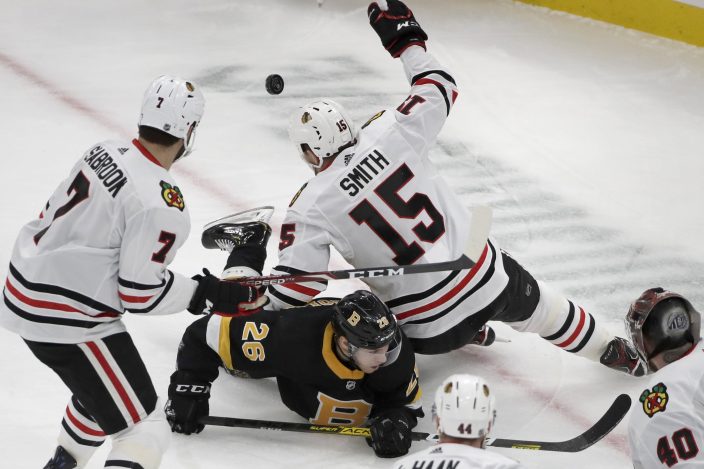 Boston Bruins center Par Lindholm (26) goes down as he competes for the puck against Chicago Blackhawks center Zack Smith (15) in the first period of an NHL hockey game, Thursday, Dec. 5, 2019, in Boston. (AP PhotoElise Amendola)

The Bruins had not lost since Nov. 16. Their third-period comeback preserved another streak, though: No Boston pro team has lost a home game in regulation since the Baltimore Orioles beat the Red Sox on Sept. 28.

Neither the Patriots nor Celtics have lost at home this season, and the Bruins are now 12-0-5.

Tuukka Rask made 26 saves for the Bruins. 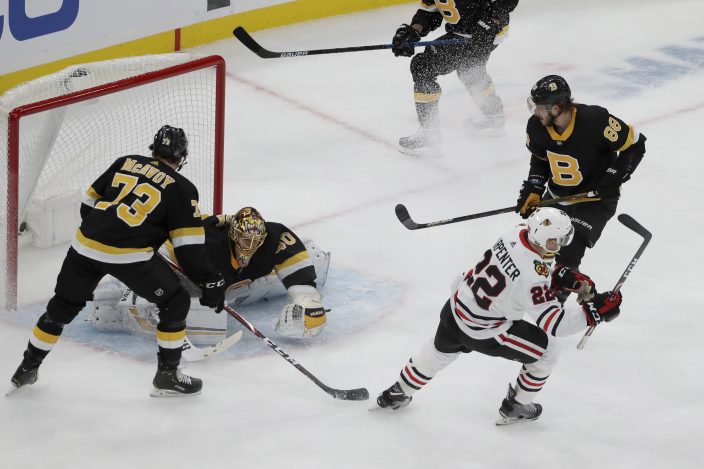 The Bruins thought they opened the scoring early in the first period when Matt Grzelcyk's shot, which may have been tipped by Jake DeBrusk, found its way under Lehner's right pad and came to rest behind him, about six inches from the goal line. DeBrusk — and pretty much everyone else — stopped, thinking it was a goal, but when no whistle came Calvin de Haan swept the puck away and play continued.

The Blackhawks, who went almost nine minutes before getting their first shot, took a 1-0 lead on a short-handed goal when Charlie McAvoy whiffed on the puck at the blue line and Carpenter skated off with it, passing to Zack Smith in the Bruins zone and then scoring on the rebound.

Just 37 seconds later, on the power play, Strome tipped a shot from Erik Gustafsson over Rask's shoulder to make it 2-0. DeBrincat made it 3-0 17 seconds into the third. 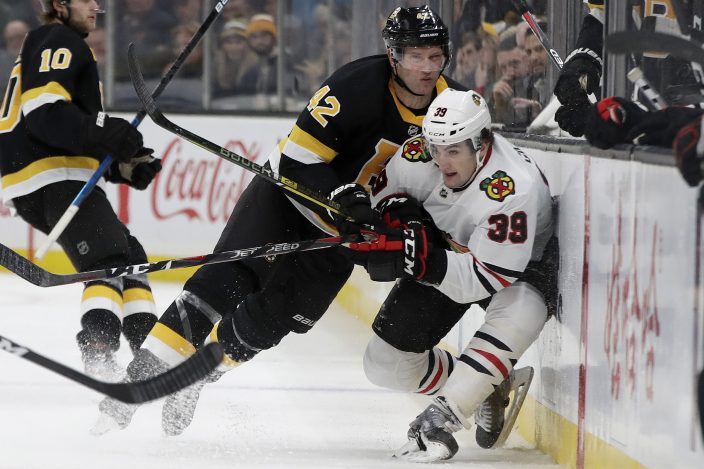 But that lasted just 1:32 before Joakim Nordstrom cut the deficit to 3-1. Chris Wagner made it 3-2 on an unassisted, short-handed wrist shot with 4:59 left, and then the Torey Krug tied it with 2:33 remaining in regulation.

NOTES: It was DeBrincat's first goal in 13 games. .... In addition to the Patriots (5-0) and Celtics (8-0), the New England Revolution won their final home game on Sept. 29. The Boston Pride of the National Women's Hockey League are 9-0 at home this season.