Pascal Siakam scored 24 points, Fred VanVleet had 20 and Kyle Lowry 19 as the Raptors lost back-to-back regular-season home games for the first time since losing to Oklahoma City and Charlotte last March 22 and 24. 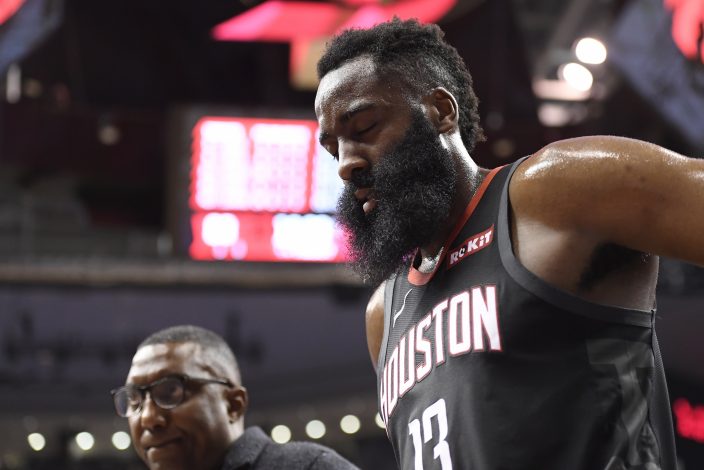 Houston Rockets guard James Harden (13) leaves the court after he was injured against the Toronto Raptors during second half NBA action in Toronto on Thursday, Dec. 5, 2019. (Nathan DenetteThe Canadian Press via AP)

McLemore set a career high by making eight 3-pointers on 17 attempts. Tucker matched his season high with five made 3-pointers. Houston finished 22 for 55 from long range.

Harden shot 7 for 11, his fewest attempts of the season. He failed to finish as Houston’s leading scorer for the second time this season. The only other time was an opening-night loss to Milwaukee, in which Harden shot 2 for 13 and scored 19 points.

Harden landed heavily after taking contact on his drive to end the third. He was tended to by trainers before getting to his feet and slowly walking to the locker room, but returned 2 1/2 minutes into the final quarter.

As well as the Philadelphia 76ers have been playing at home lately, they just can't consistently get their act together on the road, and a combined 15 turnovers by Joel Embiid and Ben Simmons contributed to a loss at Washington.

The Sixers dropped to 5-7 away from Philadelphia — where they are 10-0 this season — despite 33 points from Tobias Harris, 26 points and a season-best 21 rebounds from Embiid, and 17 points and 10 assists from Simmons.

Facing one of the most lax defenses in the NBA, Embiid had eight turnovers and Simmons seven. The 76ers ended up with 21 in all, leading to 30 points for the Wizards, who had lost five of their past six games entering the night.

Bradley Beal had 26 points and 10 rebounds for Washington.

Rookie Rui Hachimura scored 27, while Davis Bertans scored 19 of his season-high 25 points in the second quarter.

Devin Booker broke out of a perimeter-shooting slump, scoring 21 of his season-high 44 points in the third quarter, and Ricky Rubio powered Phoenix with four points and a critical assist in overtime in a victory over New Orleans.

Playing the back end of a back-to-back, Phoenix led by 18 points entering the fourth quarter, but the Pelicans fought back with five 3-pointers, two by the normally scatter-shooting Lonzo Ball, to tie it at 125. The Pelicans had a chance to win in regulation, but Brandon Ingram missed a 15-foot jumper from the right baseline as time expired.

In overtime, Ingram’s conventional three-point play tied it at 129, but Rubio hit a 12-footer and a scoop in the lane and then added a no-look assist to put the Suns up 135-129. Rubio finished with 15 assists.

New Orleans got to 135-132 on JJ Redick’s 3-pointer with 56.5 left, but Frank Kaminsky, who had six points in the overtime, iced it with two free throws. Kaminsky finished with 20 points, and Kelly Oubre had 14 points and 15 rebounds.

Jerami Grant added 16 and Monte Morris had 15. The Nuggets shot 56% from the field, had eight players reach double-figures and snapped a two-game losing streak. Mitchell Robinson for New York. The Knicks have lost eight straight.

US seeks to tighten rules covering service animals on p ...