Haley Anderson has been through this before.

In the lead-up to the Rio Olympics, all the talk about open water swimming focused on the conditions rather than the competition.

Now, it's happening again with the Tokyo Games less than a year away. 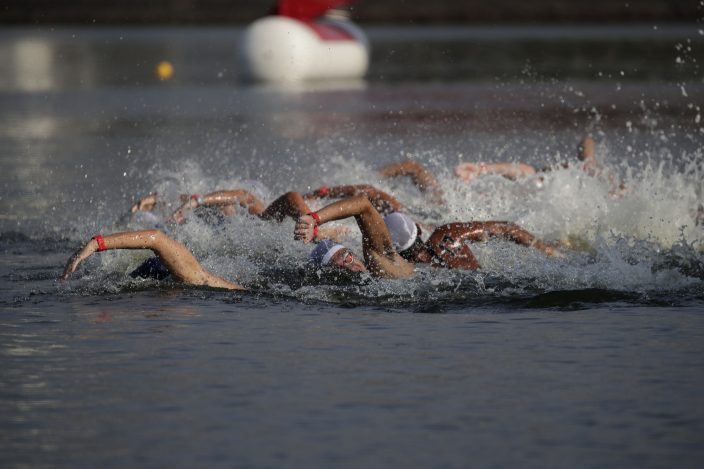 FILE - In this Aug. 11, 2019, file photo, athletes compete in a marathon swimming test event at Odaiba Marine Park, a venue for marathon swimming and triathlon at the Tokyo 2020 Olympics, in Tokyo. The IOC moved next year’s Tokyo Olympic marathons and race walks out of the Japanese capital to avoid the stifling heat and humidity. Some swimmers and an 11,000-member coaching body want similar treatment: find an alternative to the distance-swimming venue in Tokyo Bay known as the “Odaiba Marine Park.”(AP PhotoJae C. Hong, File)

This time, there is concern about the potentially dangerous heat.

For athletes such as Anderson and U.S. teammate Jordan Wilimovsky, it's all rather frustrating. The Olympics is the one chance for their obscure sport to really shine. Instead, they're being asked whether it should be moved to a cooler location.

“It's been really frustrating,” Anderson said Thursday night after competing in the U.S. Open championship, which is being held at Georgia Tech. “No one wants to know how we're doing, how we're preparing. It's all about he conditions.” 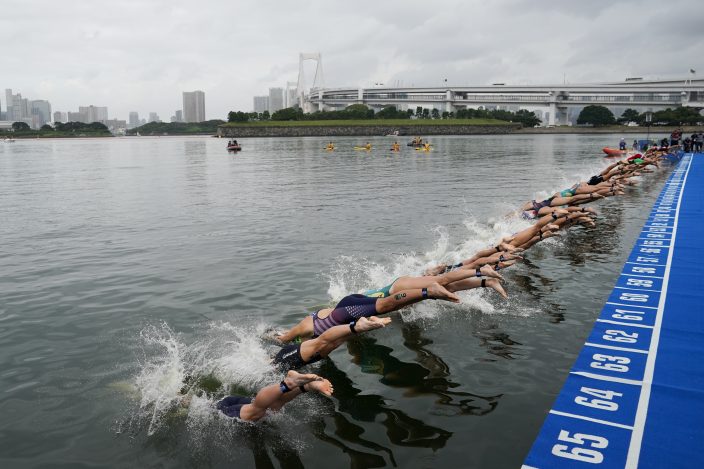 FILE - In this Aug. 15, 2019, file photo, athletes dive into the water at the start line during a women's triathlon test event at Odaiba Marine Park, a venue for marathon swimming and triathlon at the Tokyo 2020 Olympics, in Tokyo. The IOC moved next year’s Tokyo Olympic marathons and race walks out of the Japanese capital to avoid the stifling heat and humidity. Some swimmers and an 11,000-member coaching body want similar treatment: find an alternative to the distance-swimming venue in Tokyo Bay known as the “Odaiba Marine Park.”(AP PhotoJae C. Hong, File)

Not that she's complaining about the focus on safety.

“We need to talk about it,” Anderson said. “I'm glad people are starting to speak out and hopefully it will get people moving, because there's no Plan B. There should always be a Plan B for any race.”

Wilimovksy remembered the 2016 competition being overshadowed by the severe pollution at Rio's Copacabana Beach.

“It's a little annoying that it's come up again four years later,” he said.

Anderson competed at a test event in Tokyo Bay this past August, when sweltering conditions provided a sobering preview of what the swimmers will face next summer.

She dropped out less than a quarter of a way through the 10-kilometer race, feeling it just wasn't safe enough to press on.

“I wasn't comfortable,” said Anderson, a silver medalist at the 2012 London Games who already has qualified for her third Olympics. “It was warm water, warm air. One of their solutions was moving it earlier (in the day), but it doesn't cool off that much.”

Fearing Tokyo's blistering summer heat, the International Olympic Committee already ordered the marathon and race-walking events moved to Sapporo in northern Japan. Local organizers bristled over the decision, saying it was forced on them by the IOC and deprived the city of one of its glamour events.

Now attention has turned to open water, especially in light of very warm water temperatures recorded this past summer at the course known as “Odaiba Marine Park."

“We already have to deal with a lot of different conditions, which I like," Anderson said. "That's what makes open water interesting and fun. That's what drew me to it. But there's a point to where it's dangerous.”

There also are concerns about water quality, most notably E. coli bacteria. There are filters to help deal with the issue, but heavy rainfall exacerbates the problem.

“Hopefully they're able to figure it out at the venue that they have,” said Wilimovsky, who will be competing in his second Olympics after finishing fifth in Rio. “Odaiba looked really cool when we were there for the site visit."

When Anderson was asked whether the open water races should be moved to a different location, she didn't hesitate.

“Yes,” Anderson said. “I would love to see some options. It's hard, because as an athlete you don't get to choose where you race. But I just want somewhere that's safer.”

USA Swimming officials have quietly lobbied to move the Olympic events to a lake course at the base of Mount Fuji, which would provide a striking backdrop. But Tokyo organizers have been adamant that no more events be shifted out of the city. It seems highly unlikely the IOC would try to impose another venue change at this late date.

This figures to remain a contentious issue, especially for a U.S. team that hasn't forgotten losing one of its own.

In 2010, hot water temperatures were linked to the death of American swimmer Fran Crippen during a distance swim in the United Arab Emirates. The autopsy concluded that he died from drowning and heat exhaustion, with the possibility of a heart abnormality.

It was the first competitive death in FINA’s history, putting severe pressure on the governing body to improve safety standards.

“It's always on our minds,” Anderson said. “Fran was always the biggest supporter of athlete safety. The biggest. That's what he instilled in us. It's frustrating that we're dealing with the same issues. There have been multiple races that I've pulled out of because I didn't feel safe."

In 2016, the open water races went on as scheduled at Copacabana. No one reported any health issues afterward.

“Instead of showcasing what open water swimming's about, all the questions were, ‘How do you feel about racing in dirty water?’” Wilimovsky recalled. “It turned out fine. The race was awesome. It's just annoying that (water quality) was kind of hanging over it.”

He is confident that no one will be in harm's way at the next Olympics.

“I trust the U.S. is not going to make us race or put us in a position to race where the water's unsafe,” he said.

If that's not the case, Anderson isn't sure what she'll do.

It's one thing to drop out of a test event. It's a whole different issue when an Olympic medal is on the line.

“Swimming is once every four years. It's not like the NBA and other sports, where you have a huge event every year,” Anderson said. “It's hard to take your competitiveness and try to take a step back. I want to do well. I want to compete at the Olympics. But at what cost?”