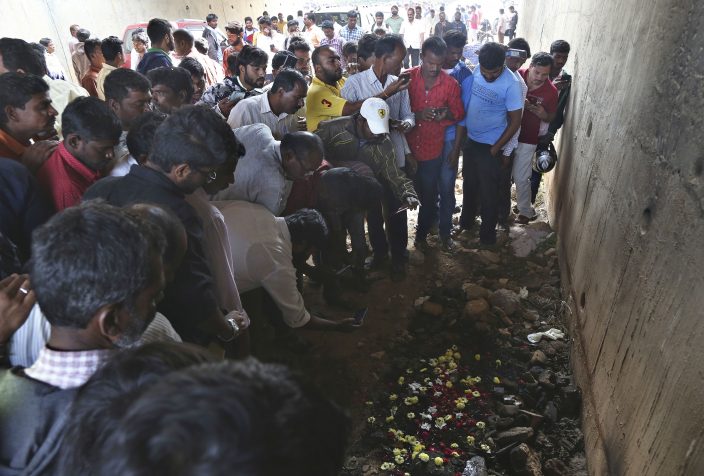 Indian men gather at the site where the burned body of a 27-year-old woman was found last week by a passer-by, in Shadnagar some 50 kilometers or 31 miles from Hyderabad, India, Friday, Dec. 6, 2019. Indian police on Friday fatally shot and killed four men suspected of raping and killing a woman in southern India, leading some to celebrate their deaths as justice in a case that has sparked protests across the country. (AP PhotoMahesh Kumar A.)

THE RECKONING-SONS OF A FATHER — An Associated Press story on the front page of a newspaper in Nairobi brought together two Kenyan men -- one who knew that his father was an Italian missionary priest, and another who wanted proof that he was the son of the same priest. The Vatican only recently acknowledged that it has had to deal with the problem of priests fathering children; their kids are abandoned, deprived of their identities and ignored by church superiors when they seek answers or help. Would DNA testing show that these two men are half-brothers? By Khalid Kazziha and Nicole Winfield. UPCOMING: 1,870 words by 4 a.m., photos, video. 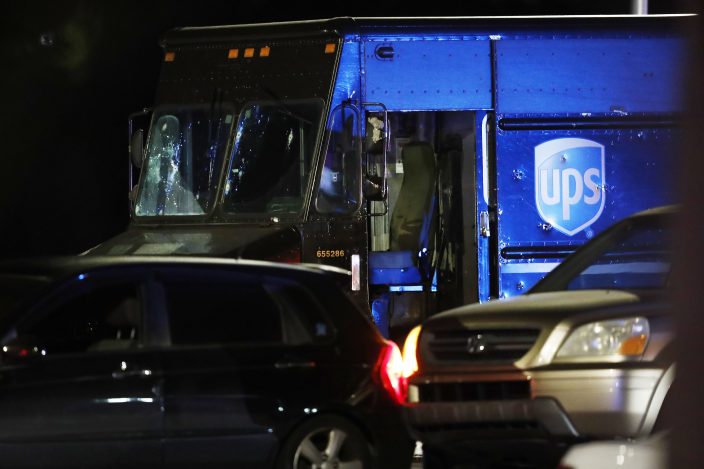 Authorities investigate the scene of a shooting Thursday, Dec. 5, 2019, in Miramar, Fla. Four people, including a UPS driver, were killed Thursday after robbers stole the driver's truck and led police on a chase that ended in gunfire at a busy Florida intersection during rush hour, the FBI said. (AP PhotoBrynn Anderson)

LIBYA-UN MIGRANT CHAOS — The U.N. has lost control of the EU-funded center in Libya that was intended to be the last stop before migrants were resettled outside a country notorious for trafficking, ransoms and abuse. The center in Tripoli was once praised as an “alternative to detention” but is increasingly resembling Libya's militia-controlled lockups for migrants. By Lori Hinnant and Maggie Michael. SENT: 1,560 words, photos.

TRUMP-IMPEACHMENT STRATEGY — After months of fighting the House impeachment inquiry and blocking witnesses, the White House is publicly embracing a new strategy. President Donald Trump and his allies are focusing on the Senate, where they see a potential political upside to a public trial on friendlier turf. By Jill Colvin. SENT: 840 words, photos. With TRUMP-IMPEACHMENT-DEMOCRATS — House Democrats move toward impeachment, largely united and with little overt grumbling; TRUMP-IMPEACHMENT-ARTICLES — What will probably be in the articles of impeachment against Trump. For full coverage of the impeachment inquiry in AP Newsroom: https://newsroom.ap.org/page/impeachment

IMMIGRATION-VICTIM IDENTIFICATION LAB — Homeland Security Investigations, a division of U.S. Immigration and Customs Enforcement, has a victim identification lab where three analysts and one special agent comb through the graphic images of child abuse and exploitation to find hidden clues to help identify the children. The work of HSI agents has led to thousands of child exploitation-related arrests. By Colleen Long. SENT: 1,240 words, photos.

INDIA-GANG RAPE -- Indian police fatally shot and killed four men suspected of raping and killing a woman in southern India, leading some to celebrate their deaths as justice in a case that has sparked protests across the country. SENT: 370 words, photos. By Mahesh Kumar.

UPS TRUCK CHASE-SHOOTOUT — Four people, including a UPS driver, were killed after robbers stole the driver’s truck and led police on a chase that ended in gunfire at a busy South Florida intersection during rush hour, the FBI says. By Brynn Anderson and Tim Reynolds. SENT: 740 words, photos, video.

UBER-SEXUAL-ASSAULTS — Uber, as part of a much anticipated safety report, reveals that more than 3,000 sexual assaults were reported during its U.S. rides in 2018. That figure includes 229 rapes across the company's 1.3 billion rides. The ride-hailing company noted that drivers and riders were both attacked, and that some assaults occurred between riders. By Technology Writers Rachel Lerman and Barbara Ortutay. SENT: 700 words, photo.

PEARL HARBOR-LAST ARIZONA INTERMENT — Divers will place the ashes of a survivor from the USS Arizona in Pearl Harbor in the wreckage of his ship during a ceremony this weekend. Lauren Bruner will be the 44th and last crew member to be interred on the Arizona in accordance with this rare Navy ritual. By Audrey McAvoy. SENT: 980 words, photos. Also see PEARL HARBOR-SHOOTING below.

MISSING-HELICOPTER-MINNESOTA — Three soldiers from the Minnesota National Guard were killed when the Black Hawk helicopter they were riding in for a routine maintenance test flight crashed in a farm field in central Minnesota. SENT: 530 words, photo, video.

PEARL HARBOR-SHOOTING — Officials will beef up security as usual for the ceremony to remember those lost in the attack on Pearl Harbor 78 years ago, with service members and dignitaries confronting a fresh tragedy after a U.S. sailor killed two civilians, wounded another and then turned the gun on himself at the storied military base. SENT: 810 words, photos, video.

RELIGION-LGBTQ COMPROMISE — As Democrats champion anti-discrimination protections for the LGBTQ community and Republicans counter with worries about safeguarding religious freedom, one congressional Republican is offering a proposal that aims to achieve both goals. SENT: 490 words, photo.

HARVEY-WEINSTEIN-BAIL-REFORM — Harvey Weinstein wasn't the kind of criminal defendant New York lawmakers had in mind when they passed a law this year eliminating cash bail for most nonviolent crimes. SENT: 670 words, photos.

RAPE-ACCUSER'S NAME — A Texas woman is fighting for anonymity in a lawsuit alleging she was sexually assaulted by a co-worker, but a federal judge who plans to dismiss the case has ordered that her name be made public first. SENT: 710 words.

KANSAS-JUDGE-COMPLAINTS — A foul-mouthed Kansas judge accused of bigotry and racism who cursed at courthouse employees so often that a trial clerk kept a “swear journal” documenting his obscene outbursts is facing complaints that his conduct violates the central judicial canons of independence, integrity and impartiality. SENT: 740 words, photo.

EXECUTION-TENNESSEE — A blind prisoner convicted of killing his estranged girlfriend by setting her on fire in her car was put to death in Tennessee's electric chair, becoming only the second inmate without sight to be executed in the U.S. since the reinstatement of the nation's death penalty in 1976. SENT: 890 words, photo.

UKRAINE-RUSSIA-SUMMIT — For new Ukrainian President Volodymyr Zelenskiy, a summit meeting with Russia, France and Germany marks a decisive moment in his push to end more than five years of fighting with Moscow-backed separatists in the eastern part of his country.

BRITAIN-BREXIT-ELECTION-SCOTLAND — The question of Scotland's independence from the rest of the United Kingdom is not on the ballot, but it’s uppermost in the minds of many voters in Scotland as they make their final choices. SENT: 990 words, photos.

AP-INTERVIEW-JON-HUNTSMAN — Trump’s former ambassador to Russia says Vladimir Putin is likely “joyful” about the renewed prominence of a debunked conspiracy theory that Ukraine was responsible for meddling in the 2016 election, which experts consider Russian disinformation. By Lindsay Whitehurst. SENT: 500 words, photos.

R KELLY — Federal prosecutors are accusing singer R. Kelly of scheming with others to pay for a fake ID for an unnamed female a day before he married R&B singer Aaliyah, then 15 years old, in a secret ceremony in 1994. SENT: 690 words, photos.

FLESH-EATING BACTERIA-DEATHS — A flesh-eating bacteria linked to the use of black tar heroin has killed at least seven people over the past two months in the San Diego area, prompting health authorities to alert law enforcement and other officials in California. SENT: 530 words, photo.

OPEN WATER-HERE WE GO AGAIN — Open water swimming is facing another round of troubling questions leading up to the Tokyo Games. By National Writer Paul Newberry. SENT: 920 words, photos.