Minutes after Joe Biden met Cathy Buxengard, he commandeered her cellphone to talk with her 99-year-old mother about her service as a World War II nurse and how worried she is about the United States today.

Days later, near the end of his eight-day Iowa bus tour that concludes Saturday, the Democratic presidential contender stood alongside the man who, 15 years ago, won the nomination Biden now seeks. “Never has there been a moment more important for a person like Joe Biden to sit behind that desk in the Oval Office,” John Kerry declared. 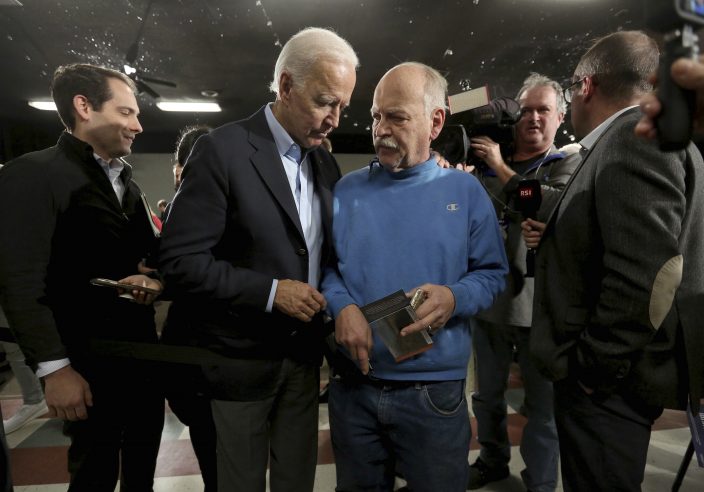 The breadth of Biden’s most intense campaign blitz since he launched his campaign in April showcased the 77-year-old’s potential reach across a disparate and diverse Democratic electorate. Yet it also highlighted the needle-threading and sometimes-contradictory effort that Biden is attempting as he grasps a third time for the presidency. Polls suggest he remains a national front-runner, but he is in a cluster with Mayor Pete Buttigieg and Sens. Elizabeth Warren and Bernie Sanders in Iowa and the first primary state of New Hampshire.

His advisers insist that he doesn't have to win Iowa to claim the Democratic nomination, with his support among minority voters giving him options in later states. But the emphasis on Iowa reflected a campaign that doesn't want to start the 2020 nominating calendar with a bad showing on Feb. 3. "It's getting cuttin' time here," Biden said Friday.

Biden focused the 18-county itinerary on Iowa’s rural and small towns, places that he called “the forgotten soul of America” and that his advisers believe will play an underappreciated role in the nominating fight and a hypothetical general election match-up against President Donald Trump. Yet on two evenings, the former vice president traded his “No Malarkey”-emblazoned bus for a private jet to attend high-dollar campaign fundraisers in New York and Chicago. 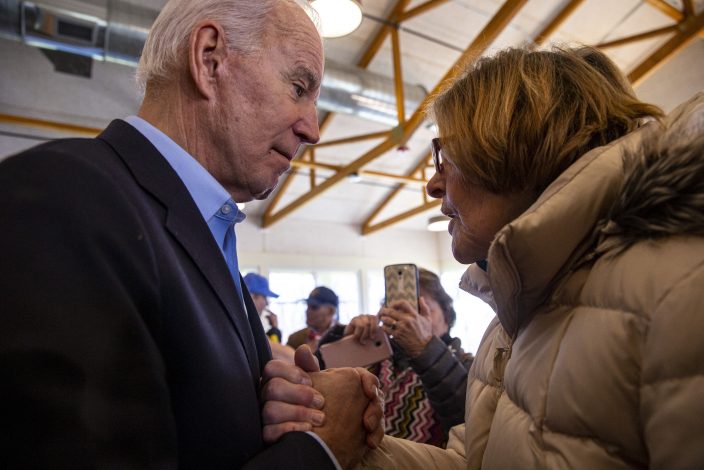 In the first setting, Biden recounted his upbringing in Scranton, Pennsylvania, and Claymont, Delaware. “I was raised just like you were,” he said in county after county, even if rural Iowans “think of Delaware as just an East Coast state.” In those big-city venues, meanwhile, Biden mingled with some of the deepest Democratic pockets. One effort reminded voters of Biden’s “Middle-Class Joe” nickname, the other that he trails Buttigieg, Warren and Sanders in fundraising and needs the help of wealthy donors to get past them and face Trump.

Biden rarely mentioned his 14 opponents for the Democratic nomination other than as a good-natured laugh line -- “They’re good people, all 900 of ‘em.” Showing surprise when an aide told him Kamala Harris had dropped out of the race, he praised the California senator who’d savaged him in a June debate. But he couldn’t resist digs at Buttigieg.

“He stole it,” Biden said of Buttigieg’s health plan, which he contends borrows from his “public option” outline. Of Warren, he asked: “Where’s the enthusiasm?” He later softened both observations, clarifying that he means he’s the Democrats’ best combination of pragmatism and experience. “The next Democratic nominee has to be able to get something done in Congress,” he said plainly in Decorah.

Explaining why the opening days of his tour didn’t include public question-and-answer sessions with voters, Biden told reporters he’s a “tactile politician,” prioritizing time on the rope lines where voters can talk to him one-on-one. That allowed him moments with voters like Buxengard, who reinforced one of Biden’s campaign pillars: the argument that Trump perverts the nation’s character. Her mother, Buxengard said, insists that “everything those boys fought for" in World War II, Trump is "just throwing away.”

It gave Biden a chance to connect with Bobbie Moore, a Council Bluffs nurse who is volunteering for him and wants to help corral voters on caucus night. He chatted for more than five minutes with undecided voter Gary Riesselman, a Carroll County farmer who asked detailed questions about how Biden would handle China and Trump’s trade war. An independent who doesn't like Trump, Riesselman walked away saying he’d at least consider caucusing for Biden. That same open access offered new grist for progressives who oppose Biden's candidacy. An activist from the environmental group Sunrise Movement asked Biden on camera why he wouldn't ban fracking immediately. After a back-and-forth volley, Biden told the young man: “Vote for somebody else.” When Biden started taking questions later in the week, he had an even sharper exchange with an older voter who questioned Biden's advancing age and peddled unsubstantiated claims championed by Trump that Biden and his son Hunter engaged in Ukrainian corruption while the elder Biden was vice president. Defending himself and his son, Biden called the man “a damn liar," issued a pushup and IQ challenge, and ordered the man: “Get your words straight, Jack!" As his bus, emblazoned with his “No Malarkey” motto, traversed the Iowa backroads, Biden chatted with national reporters and sat for one-on-one interviews with CNBC, Axios' HBO campaign show and Telemundo, a leading Spanish-language network. Alongside the repetition of his rural economic initiatives, Biden talked foreign policy, repeatedly blasting Trump for “treating NATO like a protection racket” during the same week that the president traveled to London for a NATO summit. And perhaps the defining juxtaposition of Biden’s campaign was that folksy manner and workman's persona alongside an unabashed show of political force and establishment muscle: the endorsements from big names like Kerry and former Agriculture Secretary Tom Vilsack, the steady stream of local Iowa politicians who introduced and vouched for him, the army of aides traveling with him, including several who worked alongside him in the West Wing when he was vice president. Whatever the scenario, Biden aides said the candidate came away better.

“What we know from a long history of Joe Biden is that him meeting with voters and speaking to them is really his strongest suit,” said Mike Donilon, who first worked for Biden in 1981.

The candidate himself added that when voters “get to know me, they like me.” Through the seemingly scattershot approach, the core Biden pitch emerged: “Ready on Day One.” The Scranton roots that connect him to working Americans, the personal loss of burying two children, learning Delaware’s ag industry as a U.S. senator, decades of foreign policy globe-trotting as a senator and vice president, cutting deals on budgets, crime bills, the Affordable Care Act — they add up to a president. Biden said it. Kerry said it. Vilsack said it. Some would-be caucusgoers said it. But Biden knows Iowa could be either a launching pad or another barrier.

“Where I come from, you ask for help,” he said in Waverly. “I fully respect anybody who does not support me, but I’m asking you ... help me out.”

Pompeo breaks silence on alleged threats to envoy in Uk ...

Biden leaves it unclear if he would honor Senate subpoena

Biden: No regrets for talking openly about stuttering

Former Iowa governor says Biden has ‘heart of a president’

Biden has 'no problem' with Bloomberg running for president

Biden: Trump has 'no idea' about working-class struggles