It was the 11th straight road win for the Lakers, who have lost just three games overall this season and sit atop the Western Conference standings.

The game was costly for Portland. Starting forward Rodney Hood was injured in the first quarter and the team later announced that he had torn his left Achilles tendon. 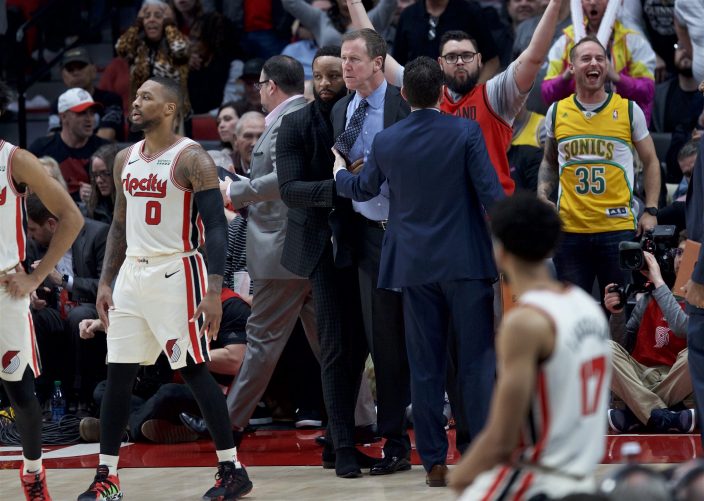 Portland Trail Blazers coach Terry Stotts, center, is held back after being ejected during the second half of the team's NBA basketball game against the Los Angeles Lakers in Portland, Ore., Friday, Dec. 6, 2019. (AP PhotoCraig Mitchelldyer)

Portland coach Terry Stotts was ejected late in the third quarter after angrily protesting a foul call that earned him a double technical. It was the first time that Stotts has been tossed from a game as an NBA coach.

Damian Lillard, who helped pull Stotts back from the confrontation with referee Leon Wood, finished with 29 points. Portland trailed by as many as 27 points in the fourth quarter.

It was the first meeting of the season between friends James and Carmelo Anthony. The two shared a quick hug on the court just before tipoff.

Portland Trail Blazers guard Rodney Hood is surrounded by teammates after tearing his Achilles tendon during the first half of the team's NBA basketball game against the Los Angeles Lakers in Portland, Ore., Friday, Dec. 6, 2019. (AP PhotoCraig Mitchelldyer)

Anthony hadn't played in the league for more than a year when the Blazers signed him on Nov. 19 to a non-guaranteed contract.

Earlier Friday the Trail Blazers guaranteed the deal to keep the 10-time All-Star on the roster through the rest of the season.

Anthony has meshed well in Portland, assuming a starting role and averaging 16.9 points and 5.9 rebounds in his eight games before finishing with 15 points against Los Angeles. 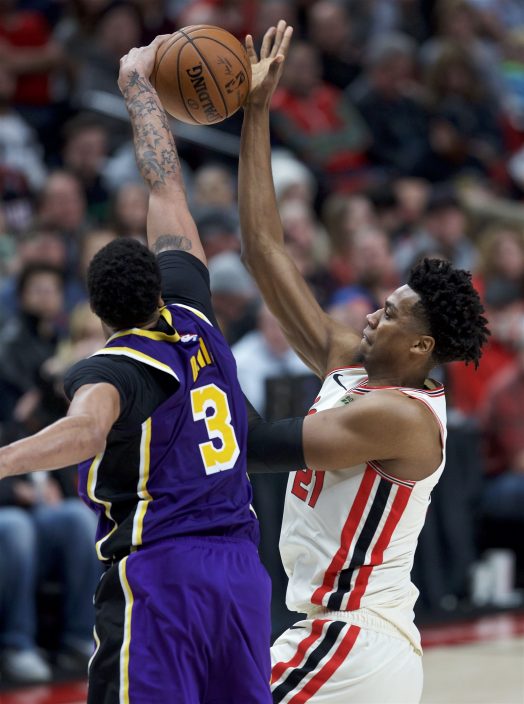 Portland (9-14) got off to a slow start this season but had won four of its last five games, including Wednesday night's 127-116 victory over the Sacramento Kings.

Anthony followed up a layup and a free throw with a 3-pointer to pull the Blazers ahead 18-17 midway through the first quarter. The Lakers led 39-34 after the period, led by Davis with 15 points.

A pair of free throws from CJ McCollum pulled Portland within 13 points in the third quarter, but the Blazers were never able to close to within single digits.

It was the first of three meetings between the two teams this season. Last year the teams split the series 2-2.

Lakers: Rondo did not return to the game after halftime because of hamstring soreness. ... Los Angeles became the second NBA team to reach 20 wins this season, joining Milwaukee. ... James also had seven rebounds and eight assists before heading to the bench late in the final quarter. ... The team's 136 points were a season high.

Trail Blazers: Hood left the game late in the first quarter after injuring his left leg. He was helped off the court and did not return. ... The Lakers' 77 first-half points were the most the Blazers had allowed in the half this season. ... Hassan Whiteside had 17 points and 10 rebounds for his 13th double-double of the season.

The Lakers host the Minnesota Timberwolves on Sunday.

A state agency was investigating T ...