For Anna Sergeyeva, rebuilding her life after surviving a week of captivity and torture in Ukraine was often more of a struggle.

She was snatched from her apartment in May 2014, when the conflict between Russia-backed rebels and Ukrainian forces in eastern Ukraine had just erupted. The city where she lived, Donetsk, was controlled by the rebels. They found a Ukrainian flag at her home and detained her for being a Ukraine supporter.

For a week, Sergeyeva’s kidnappers beat her and stabbed her, threatened her with rape and murder. She thought she would die in captivity, when all of a sudden her captors let her go. “If you come back, we will shoot you,” they said. 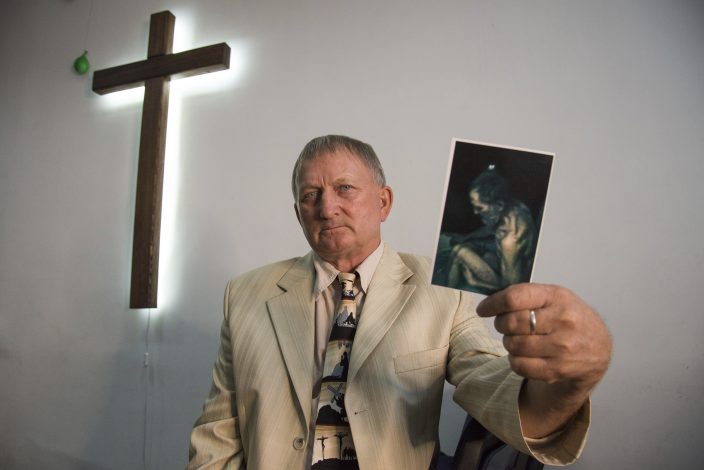 In this photo taken on Sunday, Sept. 1, 2019, Vitaly Paraskun demonstrates a photo of himself, taken right after he was released from of captivity, in a church in Kyiv where he serves, Ukraine. Paraskun was captured in October 2014 by a gang of Cossacks in the Luhansk region, where he, an Evangelical priest, was doing missionary work. Paraskun spent 199 days in an unheated basement and was regularly tortured. (AP PhotoZoya Shu)

Haunted by memories of torture and pain, Sergeyeva had to flee from the only life she knew and start anew — with no place to live, no job and no support from the government.

“The hardest part was when the euphoria (about being released) wore off. When it dawns on you that you have no place to return to, you don’t want to do anything at all,” Sergeyeva said in an interview earlier this year. “In many ways, life after captivity is a much bigger challenge than life in captivity.”

Sergeyeva’s situation is hardly an isolated case. In the five years that eastern Ukraine has been embroiled in bloodshed, between 3,000 and 10,000 people, according to different estimates, survived unlawful detentions and captivity. 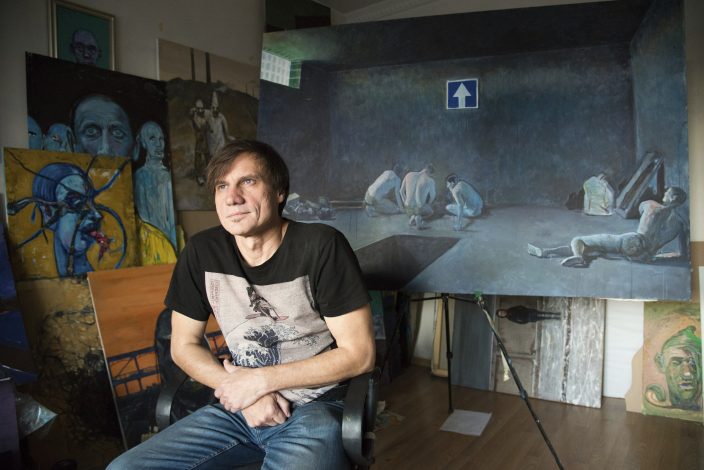 In this photo taken on Thursday, Nov. 14, 2019, Serhii Zakharov, former resident of Donetsk, poses in his apartment, which he uses as a drawing studio in Kyiv, Ukraine. Zakharov was detained in Donetsk by pro-Russia militias in August 2014, unhappy with his caricatures on them, and continued to draw sketches for the whole month he had spent in captivity. (AP PhotoZoya Shu)

Almost half of them were civilians. Armed groups from both sides of the conflict held them in underground dungeons and often used them to extort ransom from or somehow leverage the other side. Hundreds of people still remain locked up.

Civilians who went through captivity say that there is effectively no support system for them — once released, they are on their own with their injuries, psychological traumas and financial hardships. Occasionally, Ukrainian authorities offer survivors help with health care and financial support, but aside from standard social benefits for those who served in the military, there aren't any state programs to help former captives.

For many, helping other former captives is often a way to advance their own recovery. They form support groups, nongovernmental organizations and raise money for other survivors. 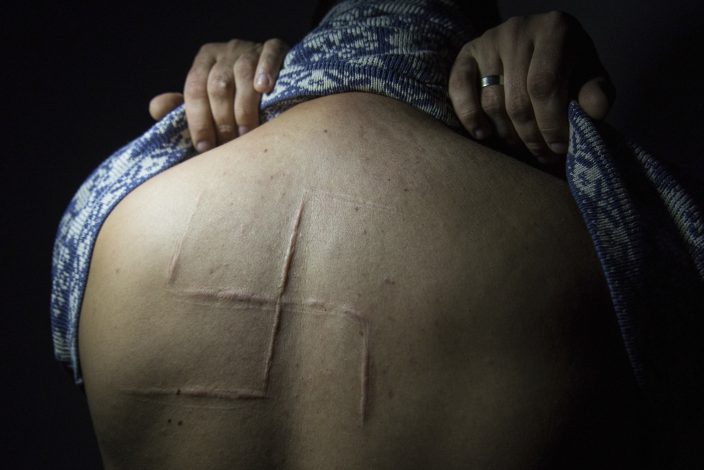 In this photo taken on Wednesday, Oct. 9, 2019, Bogdan Sergiets, former resident of Donetsk, shows a swastika scar on his back in a photographer's studio in Kyiv, Ukraine. Sergiets was captured by Russia-backed rebels in his workplace in Donetsk, he spent 10 hours in captivity, tortured and beaten, and his captors engraved the swastika on his back. (AP PhotoZoya Shu)

“After captivity everyone who went through this hell became my family,” Anatoly Polyakov, a Russian national who survived 288 days in captivity, said in an interview last year. Soon after he was released, he founded Ukrainian Association of Prisoners of War and dedicated his life to helping former captives.

“I consider it my duty to do everything in my power for these people not to feel discriminated against in their own country,” said Polyakov, who has been living in Ukraine since 2013.

Shu set out in August to take portraits of some of the former captives in an effort to shed light on their situation. She eventually became friends with the people she photographed — getting them to open up required Shu to open up to them in turn. 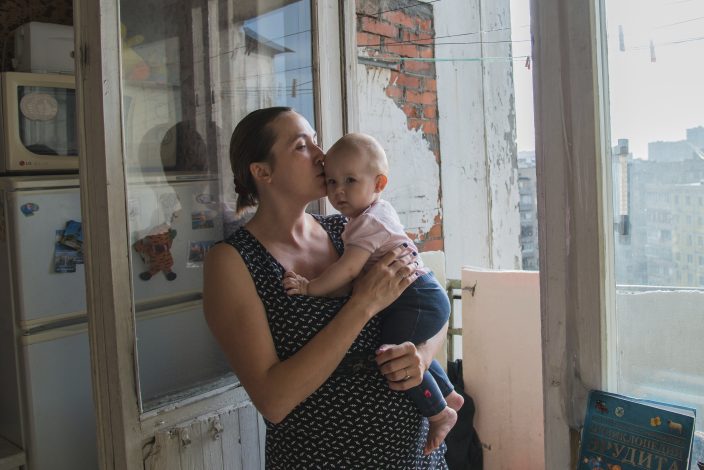 In this photo taken on Friday, Aug. 9, 2019, Anna Sergeyeva poses for a photo with her daughter in her flat in Kyiv, Ukraine. In May 2014, Sergeyeva was snatched from her apartment in Donetsk by Russia-backed separatists and was being beaten and stabbed for six days before they let her go. (AP PhotoZoya Shu)

“To do this work, you should be open, sincere and warmhearted," Shu said. 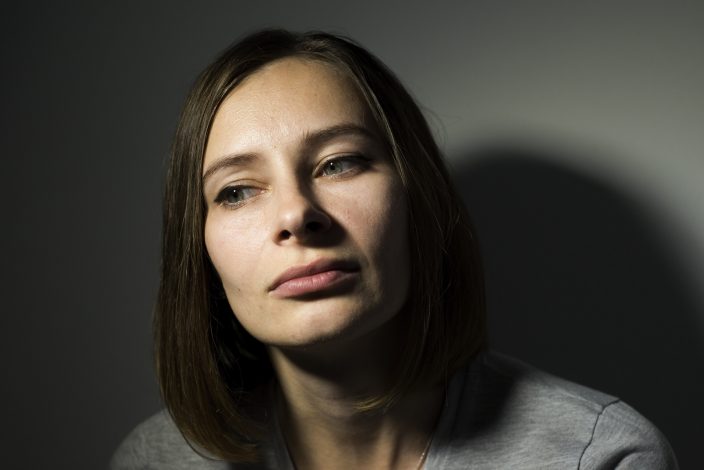 In this photo taken on Sunday, Aug. 4, 2019, Maria Varfolomeieva poses for a photo at home in Kyiv, Ukraine. Varfolomeieva was a journalist when she was captured by separatist insurgents in Luhansk in January 2015. Varfolomeieva spent a year and a half in captivity and now studies psychology, hoping to help people who went through traumatic experiences. (AP PhotoZoya Shu) 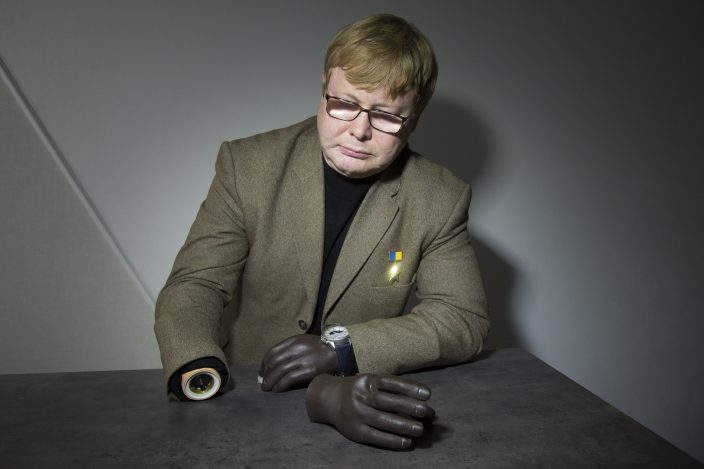 In this photo taken on Wednesday, Nov. 27, 2019, Volodymyr Zhemchugov shows his hand prostheses as he speaks to a photographer in Kyiv, Ukraine. Pro-Russian rebels took Zhemchugov captive in the Luhansk region after he was severely injured in a land mine explosion, losing his hands and eyesight. Zhemchugov spent almost a year in detention. (AP PhotoZoya Shu) 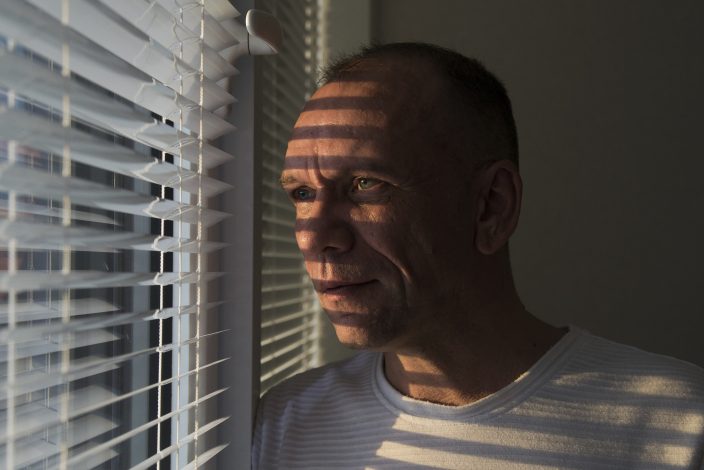 In this photo taken on Monday, Sept. 9, 2019, Anatoliy Polyakov in Kyiv, Ukraine. A Russian national with opposition views, Polyakov traveled to eastern Ukraine in 2015 and was captured and held for almost a year. Polyakov, a Russian national, who participated in the Maidan revolution in 2013, traveled to eastern Ukraine in March 2015 and was captured and held by pro-Russian militias for almost a year. (AP PhotoZoya Shu) 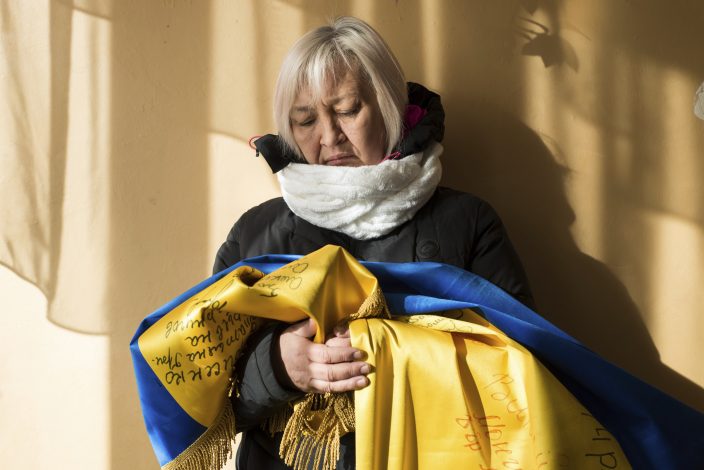 In this photo taken on Friday, Nov. 22, 2019, Tetyana Borisenko, former medical worker for Ukrainian volunteers 'Aydar Battalion', holds the Ukrainian flag she brought to the school in her home in Voznesenske village, Ukraine. Borisenko was captured by Russia-backed separatists in the Luhansk region in September 2015. She was able to secretly keep a Ukrainian flag with signatures of 12 people she was in captivity with for a month. (AP PhotoZoya Shu) 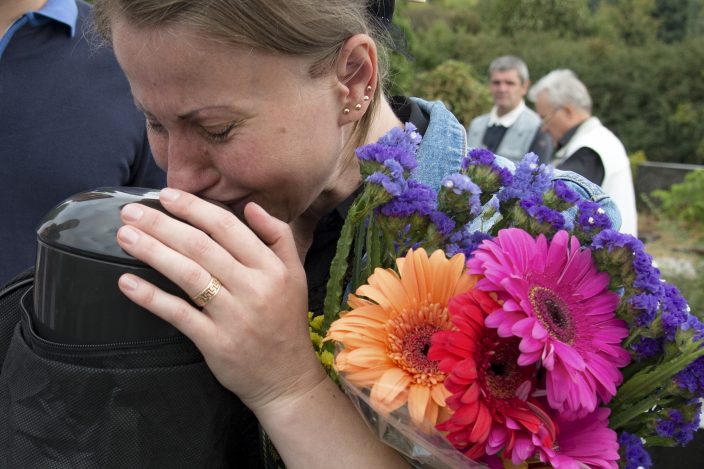 In this photo taken on Friday, Sept. 6, 2019, Tetyana, last name withheld for safety reasons, kisses the ashes of her husband goodbye in Kyiv, Ukraine. Tetyana's husband Alexander passed away a year after returning from captivity in the Donetsk region, where he was held by pro-Russian militias in 2018. (AP PhotoZoya Shu)