Employers added a sizzling 266,000 jobs in November, and unemployment matched a 50-year low of 3.5% — all while the Trump administration is waging a bruising trade war with China while fighting other trading partners, too.

Yet the economy has hardly been unscathed. Farmers are suffering. Manufacturers are mired in a slump. Business investment is down because managers don't know when — or whether — the trade hostilities, with their vast web of import taxes, will end. 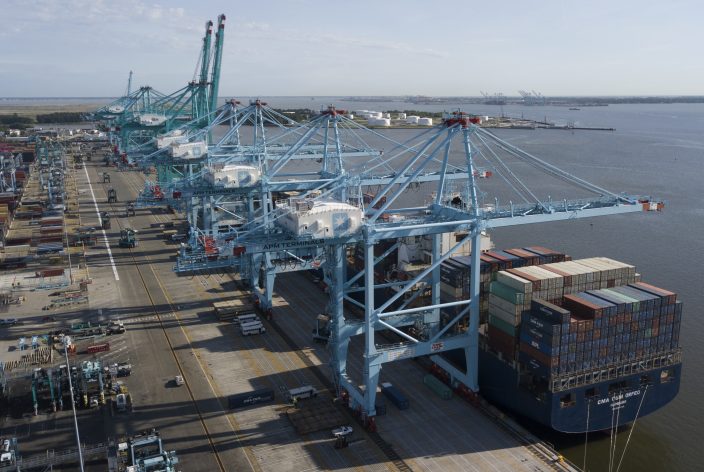 FILE - In this Friday, May 10, 2019 file photo, A container ship is unloaded at the Virginia International Gateway terminal in Norfolk, Va. Defying fears and predictions, the American job market is still shrugging off President Donald Trump’s trade wars. Employers added an impressive 266,000 jobs in November, and unemployment returned to a 50-year low 3.5% _ all at a time when the Trump administration is engaged in a bruising trade war with China while fighting other U.S. trading partners as well. (AP PhotoSteve Helber, File)

What's more, a new round of Trump tariffs — import taxes on $160 billion more in Chinese goods — is set to hit Dec. 15. Those tariffs would strike directly at American consumers, who are driving the economic expansion and have so far been largely spared the worst of the pain from Trump’s trade fights.

Can the U.S. economy, which has grown steadily if tepidly for over a decade — the longest expansion on record — withstand the manufacturing slump and the Trump trade war?

Here are some questions and answers: 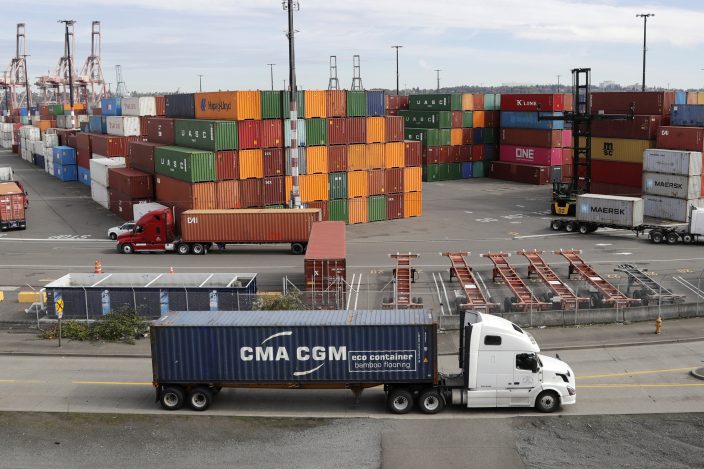 FILE - In this Oct. 2, 2019, file photo trucks hauling shipping containers drive near containers stacked five-high at a terminal on Harbor Island in Seattle. Defying fears and predictions, the American job market is still shrugging off President Donald Trump’s trade wars. Employers added an impressive 266,000 jobs in November, and unemployment returned to a 50-year low 3.5% _ all at a time when the Trump administration is engaged in a bruising trade war with China while fighting other U.S. trading partners as well.(AP PhotoElaine Thompson, File)

HOW HAS THE US ECONOMY WEATHERED THE THREATS?

So far, the U.S. impact of Trump’s trade wars has been confined largely to farms and factories. And trade, farming and manufacturing constitute a surprisingly small portion of the American economy.

Exports and imports account for just 27% of America's gross domestic product, the broadest gauge of economic output. Only in Nigeria, Cuba, Burundi and Sudan does trade represent a smaller share of GDP than in the United States, according to the World Bank.

American farmers have been punished by other countries’ retaliatory tariffs, notably from China’s taxes on American soybeans. So far this year, U.S. farm exports are down 4%. Yet farming accounts for a scant 0.6% of GDP.

Factories have been damaged too, because Trump’s tariffs have elevated the prices that manufacturers must pay for imported parts. And the retaliatory tariffs that China and other U.S. trading partners have imposed on U.S. exports have reduced America's access to foreign markets.

But because factory output represents only a small piece of the U.S. economy, the pain has so far remained contained. Manufacturing supplies 8% of American jobs, down from a peak 32% in 1953. And it produces just 11% of GDP, compared with a high of 28%, also in 1953.

Manufacturing “used to be a leading indicator’’ for the rest of the economy, said Diane Swonk, chief economist at accounting firm Grant Thornton. “It is different than it was.’’

Unless the trade hostilities escalate, most economists expect the U.S. economy as a whole to withstand the damage and keep growing, however modestly.

HOW ARE U.S. MANUFACTURERS HOLDING UP?

Factory hiring has slowed, too. Last year, manufacturers added an average of 22,000 jobs a month, the strongest pace since 1997. This year so far? A meager 5,100 a month. (In November, manufacturers did add 54,000 jobs, but virtually all of that gain came from General Motors employees returning to work after a strike ended in October.)

The Trump administration's trade conflicts account for much of the manufacturing sector’s woes. Trump’s aggressive and mercurial deployment of tariffs has paralyzed business investment, which fell in the April-June and July-September quarters after having surged in 2018 and early this year. Managers don’t know when the tariffs will end, whether they’ll escalate or which countries Trump might hit next. Many manufacturers have suspended decisions on where to situate factories, choose suppliers or pursue sales until more predictability returns to global commerce.

A broader global economic slowdown, related partly but not entirely to the trade conflicts, is contributing to the downturn in manufacturing.

COULD THE MANUFACTURING SLUMP AFFECT THE PRESIDENTIAL RACE?

No area of the country will be more crucial to the election outcome than the Rust Belt states of Michigan, Pennsylvania and Wisconsin, where the manufacturing sector remains a major employer but has shed jobs. Trump scored razor-thin 2016 victories in all three states after vowing to restore the health of factories there.

Democrats are hopeful that the ailing manufacturing sector will help them win back some of the white working-class voters who backed Trump in 2016. But voting patterns in the Trump era can be hard to predict. The president is already casting his prospective Democratic opponents as left-wing radicals who would be poor stewards of America’s manufacturing base.

And polling suggests that voter opinions about Trump are not as connected to his leadership on the economy as has been the case with past presidents.

The business world is waiting to see if Trump proceeds on Dec. 15 with plans to impose tariffs on an additional $160 billion in Chinese imports, a move that would extend his import taxes to just about everything China ships to the United States.

Those tariffs would bring the trade war home to American consumers, whose spending accounts for about 70% of U.S. economic activity. The first tariffs on Chinese goods, begun last year, were designed to largely spare ordinary households. They affected mainly industrial products. By contrast, the Dec. 15 tariffs would hit toys, smartphones and other electronics and would likely lead many retailers to raise prices for consumers.

Services industries like retail are starting to look vulnerable. Though it continues to signal growth, ISM’s services index has weakened substantially over the past year.

“The trade war is beginning to metastasize to the service-side of the economy,” said Mark Zandi, chief economist at Moody’s Analytics.

It's entirely possible that consumers could soon enjoy a reprieve. U.S. and Chinese negotiators are trying to finish work on a modest preliminary trade agreement. And Trump might agree to cancel or postpone the Dec. 15 tariffs if they do.

“It is critical that the president come to some arrangement with China,” Zandi said. “If instead the president escalates the war, the economic damage will become serious and recession next year likely.’’

From the red carpet to the main st ...

Barcelona coach Setién under fire after 3 games in char ...

Barcelona hired Quique Setién to i ...