Sergei Bobrovsky made 33 saves against his former team and Josh Brown scored the winning goal in the Florida Panthers’ 4-1 victory over the Columbus Blue Jackets on Saturday night.

Bobrovsky made his first start against the Blue Jackets since signing with the Panthers on July 1. He played the previous seven seasons with Columbus.

Florida had lost four of its previous five games. The Panthers beat Columbus for the first time in eight games.

The Panthers stretched their lead to 3-0 on Connolly’s power-play goal. Keith Yandle shot from the point and the puck hit Connolly and got past Merzlikins, who was screened on the play by Connolly, at 6:09 of the third. Connolly has seven goals in his past 11 games.

Gavrikov closed the score to 3-1 when his shot from the point beat Bobrovsky with 9:26 left in the third.

Hoffman flipped the puck from near the red line over the defense for an empty-netter with 2:23 left to make it 4-1.

The Panthers scored 18 seconds in when Dadonov redirected a shot from the point by Yandle under Merzlikins’ pads. Yandle has 19 assists in his past 17 games. 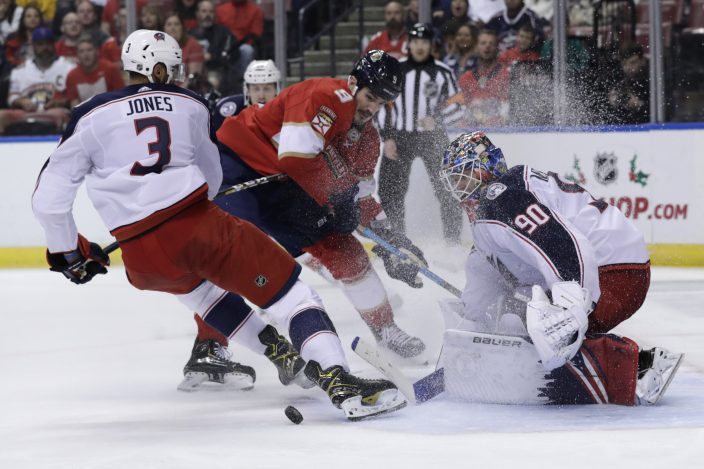 Brown made the score 2-0 when he took a cross-ice pass from Barkov and put the puck between Merzlikins’ pads at 8:53 of the second.

Notes: Panthers C Aleksi Saarela made his NHL debut after being recalled from AHL Springfield on Friday. ... Blue Jackets D Andrew Peeke, a South Florida native, played his second game after his NHL debut on Thursday…D Zach Werenski was placed on injured reserve Friday with an upper-body injury, retroactive to Nov. 30. 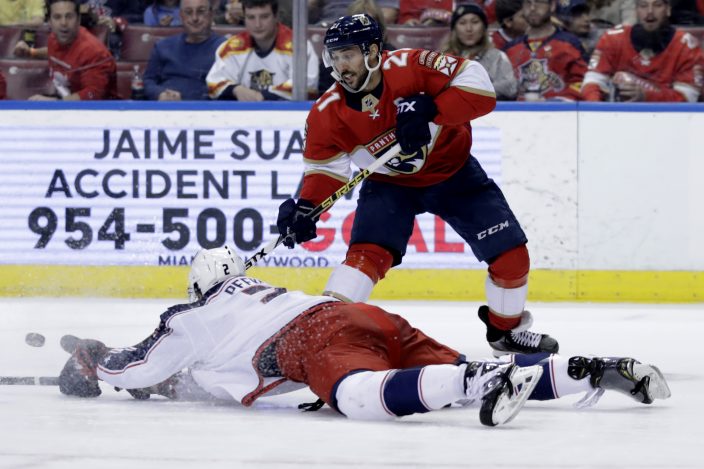 Columbus Blue Jackets defenseman Andrew Peeke, left falls to the ice as he goes for the puck against Florida Panthers center Vincent Trocheck (21) during the second period of an NHL hockey game, Saturday, Dec. 7, 2019, in Sunrise, Fla. (AP PhotoLynne Sladky)