The leader of German Chancellor Angela Merkel's party says she would have liked a clear signal from its junior governing partner that it intends to stay in Merkel's coalition, and is deeply skeptical about its calls for new concessions.

A party convention on Friday gave them a mandate to hold talks with Merkel's center-right Union bloc aimed at raising the national minimum wage, increasing public investment and raising the price of carbon dioxide in a recently agreed climate package. 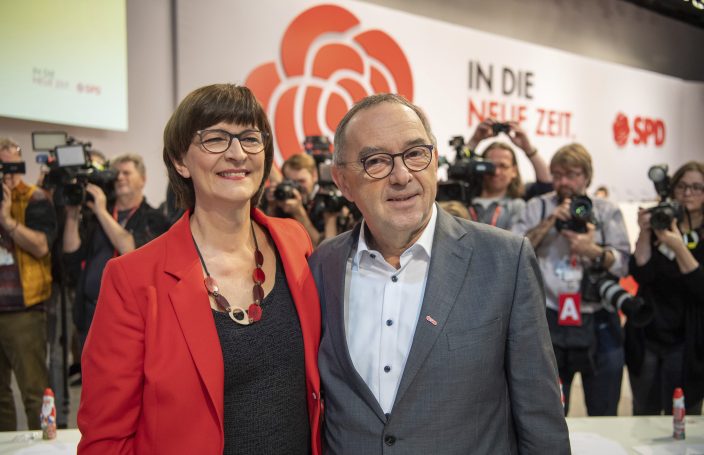 Norbert Walter-Borjans stands alongside Saskia Esken, from right, at the beginning of the German Social Democrats, SPD, federal party conference in Berlin, Germany, Friday, Dec. 6, 2019. Members of the center-left party have choosen the left-leaning duo Norbert Walter-Borjans and Saskia Esken as their new leaders. This has to be confirmed by the delegates at the party meeting. (Bernd von Jutrczenkadpa via AP)

The Social Democrat convention rejected a call from left-wingers to leave the government immediately, but left open when a decision would be made on whether the party stays or goes. Merkel's bloc has made clear that it has no intention of radically renegotiating the accord underpinning the “grand coalition” of what were traditionally Germany's biggest parties.

“I would have liked a really clear signal from the Social Democrats' convention on the continuation of the ‘grand coalition,'” Annegret Kramp-Karrenbauer, the leader of Merkel's Christian Democratic Union, told Sunday's edition of the Bild am Sonntag newspaper.

Asked what her party's red lines are, she replied that she doesn't believe in “so-called ‘red lines,’ but I won't accept conditions along the lines of ‘if this doesn’t happen, then we're going.'” 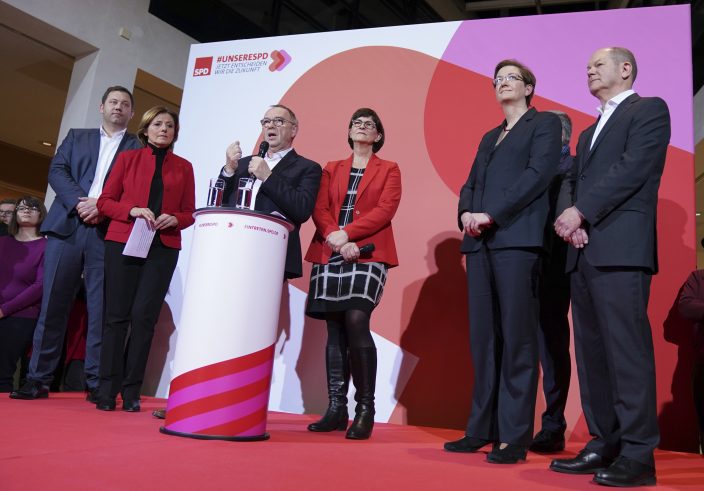 Norbert Walter-Borjans, center left, and Saskia Esken, center right, celebrate winning the vote on the podium as Olaf Scholz, Federal Minister of Finance, right, and Klara Geywitz applaud after the SPD chairmanship vote result, in Berlin, Saturday Nov. 30, 3019. The new leadership will be confirmed at the party conference on December 6. (Kay Nietfelddpa via AP)

“Governing a bit is just as impossible as being a bit pregnant,” she said.

Kramp-Karrenbauer said that “we can't start from scratch again” on the climate package, details of which are already due to be haggled over after parliament's upper house, which represents state governments, halted parts of it.

As for the call for a massive increase in public investment, she argued that there is no shortage of money and that, as long as already-agreed funding hasn't been used, it makes no sense to run up billions of euros in new debt. 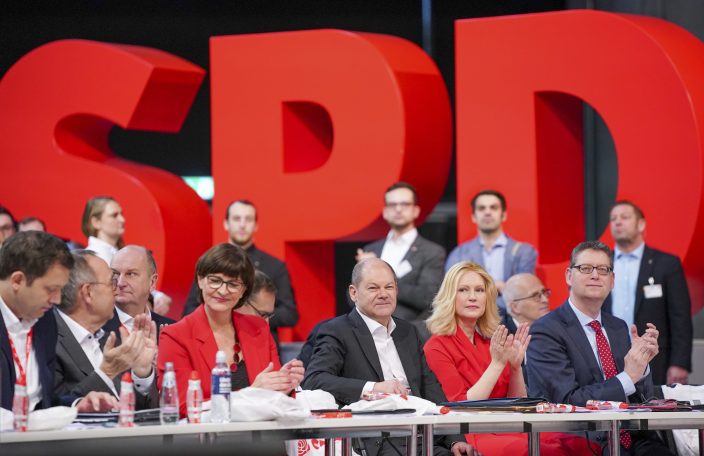 Party secretary Lars Klingbeil, Norbert Walter-Borjans, Saskia Esken, Federal Finance Minister Olaf Scholz, Manuela Schwesig and Thorsten Schaefer-Guembel, from left, during the German Social Democrats, SPD, federal party conference in Berlin, Germany, Friday, Dec. 6, 2019. Members of the center-left party have choosen the left-leaning duo Norbert Walter-Borjans and Saskia Esken as their new leaders. This has to be confirmed by the delegates at the party meeting. (Kay Nietfelddpa via AP)

In separate comments to the Frankfurter Allgemeine Sonntagszeitung newspaper, Kramp-Karrenbauer criticized the Social Democrat leadership's call for raising the minimum wage, which currently stands at 9.19 euros per hour and is due to rise to 9.35 euros in January, to 12 euros ($13.25).

The minimum wage was introduced in 2015 at the Social Democrats' insistence and its level is reviewed regularly by an independent commission. Kramp-Karrenbauer was quoted as saying that its level should “not be set politically.”

The Social Democrats only reluctantly agreed to join Merkel's fourth-term government last year and are stuck in a long-term poll slump. The parliamentary term is due to end in the fall of 2021 and Merkel has said she won't seek another term.

German govt at odds over pensions as deeper troubles lurk

Merkel's conservatives in Germany seek an end to sniping