It’s whispered in NATO meeting rooms and celebrated in China’s halls of power. It’s lamented in the capital cities of key U.S. allies and welcomed in the Kremlin.

Three years into Donald Trump’s presidency, America’s global influence is waning. In interviews with The Associated Press, diplomats, foreign officials and scholars from numerous countries describe a changing world order in which the United States has less of a central role.

And in many ways, that’s just fine with the White House. Trump campaigned on an ''America First'' foreign policy and says a strong United States will mean a stronger world. 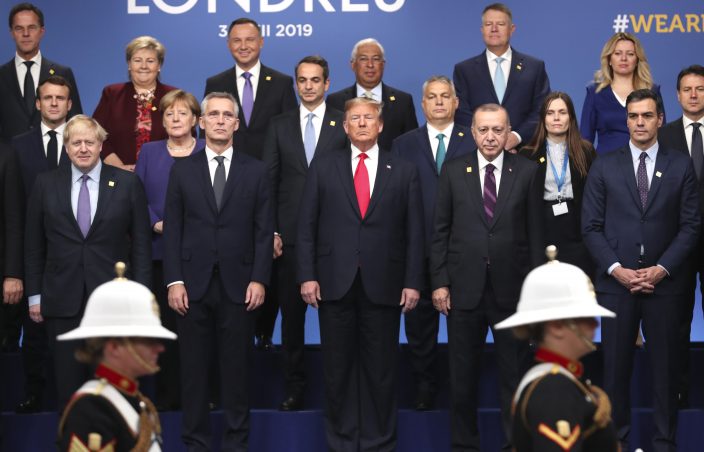 “The future doesn’t belong to globalists,” Trump told the U.N. General Assembly in September. “The future belongs to patriots.” 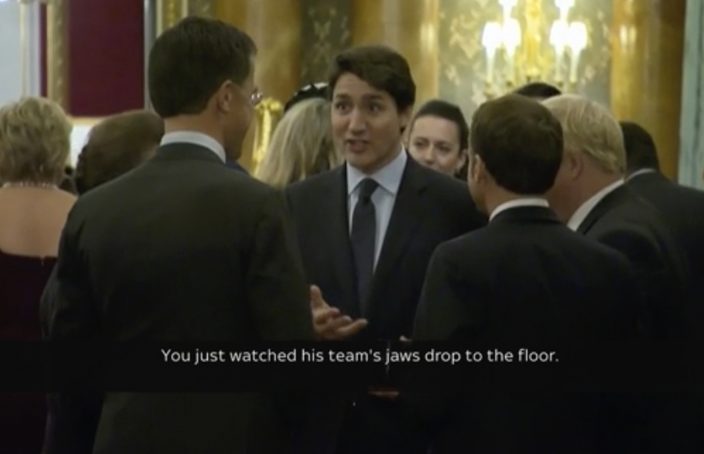 In this grab taken from video on Tuesday, Dec. 3, 2019, Canada's Prime Minister Justin Trudeau, centre, gestures as he speaks during a NATO reception. While NATO leaders are professing unity as they gather for a summit near London, several seem to have been caught in an unguarded exchange on camera apparently gossiping about U.S. President Donald Trump’s behavior. In footage recorded during a reception at Buckingham Palace on Tuesday, Canadian Prime Minister Justin Trudeau was seen standing in a huddle with French President Emmanuel Macron, British Prime Minister Boris Johnson, Dutch Prime Minister Mark Rutte and Britain’s Princess Anne. (Host Broadcaster via AP)

Instead, once-close allies — France, Egypt, Pakistan, Afghanistan, Mexico, Turkey, Germany and more — have quietly edged away from Washington over the past three years.

Sometimes it’s not so quiet.

“You just watched his team’s jaws drop to the floor,” Trudeau said, apparently speaking about his meeting with Trump, talking to a group that included the leaders of France, Britain and the Netherlands.

Trudeau quickly tried to walk back his words, telling reporters that he and Trump have a “good and constructive relationship.” But the footage brought into the open the increasing divide between the United States and its allies.

This is a major change. For generations, America saw itself as the center of the world. For better or worse, most of the rest of the world has regarded the U.S. as its colossus — respecting it, fearing it, turning to it for answers.

“We are America,” said Madeleine Albright, secretary of state in the Clinton administration. “We are the indispensable nation.”

To be sure, America is still a global superpower. But now, the country's waning influence is profoundly redrawing the geopolitical map, opening the way for Washington’s two most powerful foes — Russia and China — to extend their reach into many countries where they had long been seen with suspicion.

Because those longtime friends of Washington? Many are now looking elsewhere for alliances. Very often, they look to China or Russia.

In Islamabad, for example, where the U.S. was once seen as the only game in town, Pakistan's government now gets military aid and training from Russia and billions of dollars in investment and loans from China. In the Philippines, President Rodrigo Duterte is nurturing closer ties to Beijing despite his nervousness over its expansionism in the South China Sea. In Egypt, long one of America’s closest Middle Eastern allies, Cairo now lets Russian military planes use its bases and the two countries recently held joint air force exercises. In Ukraine, which has looked to U.S. military aid for years to try to keep an expansionist Russia in check, Trump’s questionable loyalty is seen as creating a dangerous vacuum.

Or there’s France, whose friendship with America goes back to the days of George Washington. Perhaps more than any other Western leader, French President Emmanuel Macron has made clear that Europe should look to Beijing, not Washington, when it comes to addressing global issues from trade wars to Iran’s nuclear ambitions. Macron’s recent trip to China was choreographed in part to convey that the European Union has little faith in Washington anymore.

Europe is on “the edge of a precipice,” Macron told The Economist magazine in a recent interview. “What we are currently experiencing is the brain death of NATO,” he said, a reference to the announced U.S. withdrawal from northern Syria.

Perhaps no U.S. ally is more worried than the Kurds, America’s longtime battlefield allies. They bore the brunt of the combat as the Islamic State group was driven from the territory it held across a swath of Iraq and Syria.

“Betrayal process is officially complete,” a Kurdish official said in a WhatsApp message sent to journalists after Trump's defense secretary announced U.S. troops would fully withdraw from northeastern Syria. That pullout paved the way for a Turkish offensive against Kurdish fighters and signaled to the world that U.S. may no longer be as reliable as it once was.

The Kurds weren’t taken completely by surprise. Kurdish officials had been holding back -channel talks with Syria and Russia for more than a year before the announcement. The Kurds feared they would be abandoned by Washington.

China has been delighted by what it sees as the voluntary abdication of U.S. leadership, particularly on free trade and climate change.

Trump’s pullout from the planned Trans-Pacific Partnership, for example, opened the way for Beijing to push ahead with its own alternative free-trade agreement.

Meanwhile, China has gone from being a climate change curmudgeon to sometimes reaping praise as a global leader on the issue.

The White House's National Security Council did not respond to requests for comment about this story.

Trump insists he is not pulling the U.S. off the world stage. He cites partnerships with other nations to fight terrorism and his administration highlights a recent high-profile raid in Syria that killed the leader of the Islamic State group.

Trump has successfully coaxed NATO allies to spend billions more on their own defense to lessen the burden on the U.S. He complains that America should not be the world's policeman or its piggy bank, and needs to get out of what he calls ''endless wars.''

Some former administration officials have cited Trump's business background to describe him as having a "transactional'' approach to foreign policy. He has pulled out of multilateral agreements, such as the Iran nuclear deal, yet he needs international support to pressure Tehran for its regional aggression and nuclear program. He gets credit for opening dialogues with the Afghan Taliban and North Korea, although efforts to end America's longest war and get Kim Jong Un to give up his nuclear weapons have so far been unsuccessful.

He also has set about negotiating bilateral trade agreements with many countries because he says deals made by previous administrations were unfair to the U.S. He had success with South Korea, yet has not yet sealed a deal with China.

In some ways, Washington’s declining influence is simply a reflection of history: America is no longer the singular economic and military giant that overshadowed nearly every other nation.

In 1945, America had the world’s only nuclear weapons and produced roughly half the world’s gross domestic product. Today, the U.S. has perhaps 15 percent of global GDP and even North Korea has nuclear weapons. Other countries have grown immensely. China, once a poverty-battered behemoth, has become a financial giant and an emerging superpower. Countries from Brazil to India to South Korea have become serious regional powers.

But if history plays a role, the diplomatic shifts of the Trump years are more about a White House unapologetically focused on the U.S.

Globalism was once one of Washington's few unifying themes. Now, it's an insult in the capital, and the U.S. gets more attention for rejecting multilateral agreements, from Trump pulling out of the Asia-Pacific deal to his rejection of the Paris climate accords. The president has hosted only two state dinners and has repeatedly sought to slash the State Department budget.

“The Fake News Media is doing everything possible to belittle my VERY successful trip to London for NATO,” Trump tweeted after the summit, adding that there was “only deep respect” for the United States.

A 2018 Pew Research Center survey done across 25 countries found that only 25 percent of people believed the U.S. plays a less important role now than it did a decade ago.

Another of the survey's findings: People in nearly every country said they preferred a world order led by the United States.

Husband in missing mom case pleads not guilty to murder

The estranged husband of a missing ...