Nicklas Backstrom had a smile on his face and no concerns about missing another game.

Backstrom was referring to the fictional Adam Banks character who returned from a wrist injury in time for a championship game. The Washington Capitals are getting the real standout Swedish center back while they're on a roll. 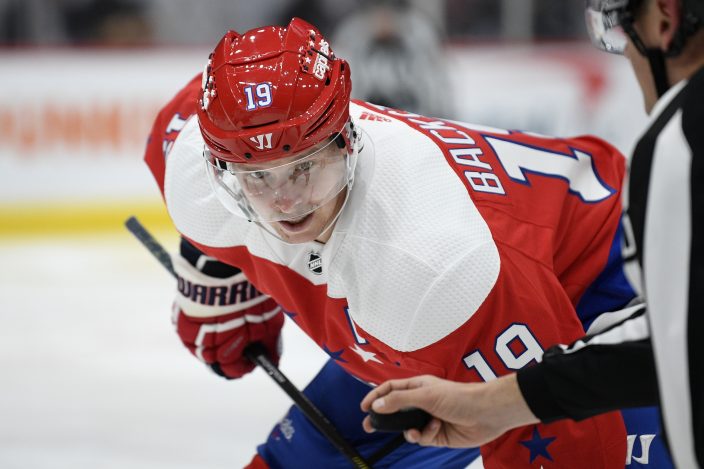 FILE - In this Nov. 11, 2019 file photo Washington Capitals center Nicklas Backstrom (19), of Sweden, waits for a face off during the second period of an NHL hockey game against the Arizona Coyotes in Washington. Backstrom is expected to return to the Capitals' lineup when they face the Columbus Blue Jackets on Monday, Dec. 9, 2019. (AP PhotoNick Wass, file)

The Capitals are expected to have Backstrom back Monday when they host the Columbus Blue Jackets. He missed the past eight games with an undisclosed upper-body injury, and Washington went 6-1-1 in that time.

With Backstrom ready to go, the Capitals are set to have their full, healthy lineup on the ice for the first time this season. Despite injuries, they lead the NHL with 22 wins and 49 points through 31 games.

“As of right now, we are playing good hockey and we are getting the points we needed,” Backstrom said Sunday. “It is still early in the season, so you have to keep build, build and build. We are a team that is building for upcoming things.”

Upcoming are matchups against the Atlantic Division-leading Boston Bruins and the Tampa Bay Lightning, a popular preseason pick to win the Stanley Cup. But Backstrom is of course referring to the playoffs, where the Capitals are looking to bounce back from last season's first-round exit and make another championship run like they did in 2018.

There's no reason to think they couldn't do that, especially given their success more than a quarter of the way through the season without the full complement of healthy bodies.

“That shows the depth that we have all the way through our lineup,” coach Todd Reirden said. "That's been a good problem to have, and it's allowed us to see some other players get opportunities and showcase some of the abilities they have."

Braden Holtby is expected to start in goal against Columbus.

Teen accused in fatal family shooting to be charged as ...

A teenager in Utah accused of fata ...