Tommy Ford finds himself in new territory — leading after the first run of a World Cup giant slalom.

The American racer used a smooth pass through the fog and the falling snow to finish in a time of 1 minute, 16.40 seconds Sunday. There are five racers within a second of Ford heading into the final afternoon run, including teammate Ted Ligety.

Ford is chasing after his first World Cup podium finish. His best performance was fourth place at the season-opening GS race in Soelden, Austria, in late October. 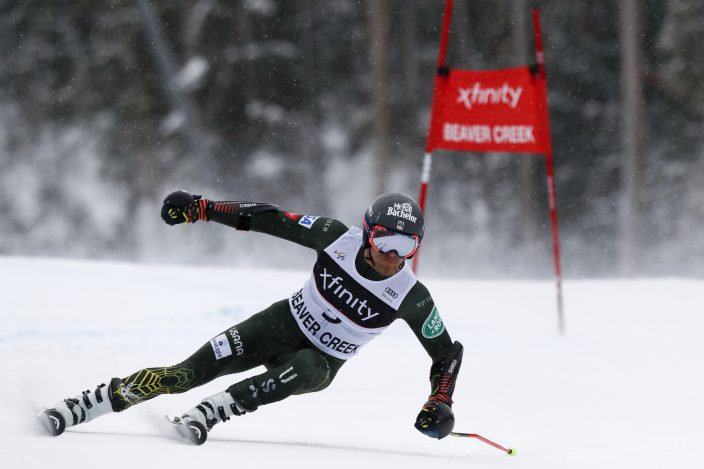 The 30-year-old Ford said the last time he was leading after a first run was on racing's equivalent of the minor-league level.

Leif Kristian Nestvold-Haugen of Norway sits in second place, 0.20 seconds back, while his teammate Henrik Kristoffersen is in third. Ligety had a solid run to make the turn in fourth place and 0.61 seconds behind Ford.

The 35-year-old Ligety is predominantly focusing on the giant slalom this season. He also has this distinction: Ligety is the last racer from the U.S. to capture a World Cup men's giant slalom race on home snow when he won at Birds of Prey in 2014.

"It's been nice, just doing GS really," said Ligety, who's captured 24 World Cup giant slalom races to being dubbed “Mr. GS” by his rivals. “I haven't had to balance as much of my time, as far as squeezing training for four different disciplines. It's good just having to think only about GS. It's a nice gear shift.”

The conditions were hardly favorable with the snow falling and fog rolling through. Competition was momentarily paused during the race because of visibility.

Defending Birds of Prey GS champion Stefan Luitz of Germany made a mistake in the foggy conditions and didn't finish his run.

"I love skiing here. But today was a really bad day for me," Luitz said.

He won his first World Cup race in Beaver Creek last December amid some controversy. Racing at an elevation of around 10,340 feet (3,152 meters), Luitz inhaled from an oxygen tank before his winning race. The International Ski Federation later disqualified him because its rules prohibit using supplemental oxygen even though the World Anti-Doping Agency does not.

But the Court of Arbitration for Sport upheld Luitz's appeal against disqualification in March and awarded him his first World Cup win.

Luitz said he never really got the chance to celebrate his achievement. That's why he's eager for another.

"Not only for the victory, but there is so much around it — for my head and my skiing," Luitz said. “That's why I'm trying so hard to get back on top.”