Sam Ficken kicked a 44-yard field goal as time expired to give the New York Jets a 22-21 comeback victory over the Miami Dolphins on Sunday.

Sam Darnold got the winning drive going with a short pass to Vyncint Smith, who turned it into a 37-yard gain that included a high-step over a would-be tackler. After a sack two plays later put the ball at the Dolphins 46, Darnold threw an incomplete pass to Smith — but the Jets argued that Nik Needham interfered with the receiver by wrapping his right arm around Smith's right shoulder.

Officials overturned the call after a video review — giving the Jets a first down and new life. A 12-yard catch by Ty Montgomery got the ball to the 26. Two plays later, Ficken won it, helping the Jets (5-8) avoid a season sweep by the lowly Dolphins (3-10). 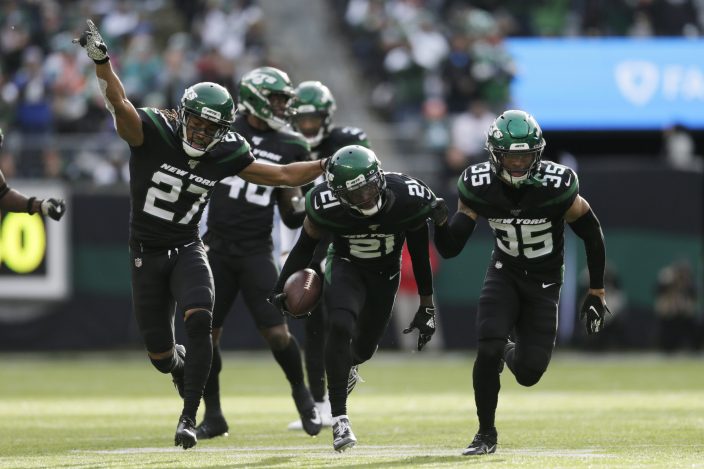 Darnold, who injured his right hand at the beginning of the fourth quarter, was off on a few of his late passes but finished 20 of 36 for 270 yards and touchdowns to Demaryius Thomas and Robby Anderson. Darnold also was intercepted once.

Anderson had seven catches for 116 yards and the score. Bilal Powell, starting in place of the ill Le'Veon Bell, had 74 yards on 19 carries.

The Jets — who lost to the previously winless Cincinnati Bengals last week — overcame a Dolphins franchise-record seven field goals by Jason Sanders, including a 37-yarder that gave Miami the lead with 1:33 left.

Ryan Fitzpatrick was 21 of 37 for 245 yards with an interception, playing without top receivers DeVante Parker and Albert Wilson who both left with concussions.

After Sanders' 22-yard field goal gave the Dolphins a 3-0 lead late in the first quarter, Darnold put New York ahead on its next possession with a 26-yard touchdown pass to Anderson. Ficken missed the extra point, but the Jets led 6-3 early in the second quarter.

New York got the ball right back when Nate Hairston picked off Fitzpatrick when he snatched the ball out of Allen Hurns' hands on first down. The Jets turned the turnover into three points and a 9-3 lead on Ficken's 37-yarder.

The Jets took a 16-6 lead with 1:55 left in the opening half on Thomas' 14-yard touchdown catch, his first for New York, after the initial call of an incomplete pass was overturned by a video review as officials ruled Thomas had possession as he was tackled by Needham while falling into the end zone.

New York nearly had another score a few plays later when James Burgess intercepted Fitzpatrick and took it into the end zone, but the Jets linebacker was called for defensive holding — negating the turnover.

Miami ended up getting a 28-yard field goal from Sanders with 19 seconds remaining in the half to cut the deficit to 16-9.

After Sanders was wide right on a 34-yarder after a low snap by Taybor Pepper that holder Matt Haack couldn't handle cleanly, the Jets marched down the field and appeared poised to add to their 16-12 lead.

On fourth-and-1 from the 14, Adam Gase chose to go for it rather than kick the field goal and make it a 7-point game. Powell was stuffed for no gain, though, and the Jets turned it over on downs.

The Jets had scored on their first possession in six straight games, but were forced to punt after a promising opening drive stalled at the Dolphins 40.

The Jets were without two of their best players with both Bell and safety Jamal Adams sitting out.

Bell was ruled out Saturday because of an illness. He practiced fully Wednesday, but then sat out Thursday and Friday.

Adams was officially ruled inactive 90 minutes before the game after he missed practice all week with a sprained ankle. It was the first game Adams has missed in his three-year NFL career.

Dolphins: Parker went out with a concussion in the second quarter, and Wilson in the third. ... TE/FB Chandler Cox injured a shoulder in the fourth quarter.

Dolphins: play at MetLife Stadium again next Sunday to take on the Giants.

Jets: travel to Baltimore to take on Lamar Jackson and the Ravens on Thursday night.

Dominic Calvert-Lewin kept up his ...