Tyler Herro scored 27 points, including a go-ahead 3-pointer with 38.2 seconds left in overtime, and the Miami Heat held off the Chicago Bulls 110-105 on Sunday night to improve to 10-0 at home this season.

Herro made three 3’s in overtime and another with 7.1 seconds left in regulation just to help the Heat get into the extra session. His last 3-pointer gave Miami a three-point lead — its biggest of the game to that point, after the Heat slogged uphill most of the way.

Jimmy Butler scored 23 points for the Heat, going 17 for 21 from the foul line. Bam Adebayo had 21 points, 13 rebounds and six assists for Miami, which also got 18 from Kendrick Nunn. 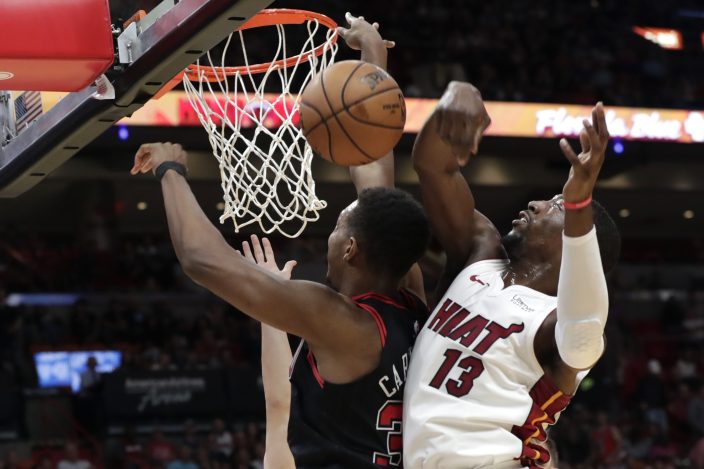 Lauri Markkanen had 13 of his team-high 22 points in the third quarter for the Bulls, who got 18 from Zach LaVine and 16 from Kris Dunn. Markkanen missed a potentially game-tying corner 3-pointer with about 1.5 seconds left in overtime, Coby White fouled Herro on the rebound, and the rookie guard made a pair of free throws to seal the win.

It was tied at 97-97 after regulation, after the lead changed hands four times in the final 84 seconds.

Herro’s 3-pointer with 7.1 seconds left put Miami up 97-95, but Butler fouled LaVine on the ensuing Chicago possession. LaVine — an 81% foul shooter — made both, Butler’s 50-footer as the horn sounded merely hit the backboard, and off to overtime they went. 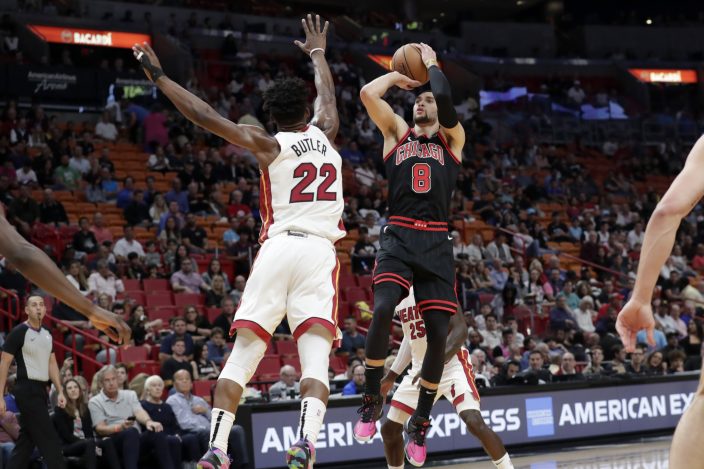 Miami improved to 3-0 in overtime this year, and is 10-0 at home for the first time in franchise history.

The Heat shot 27% and slogged their way to a 16-point first quarter, setting the tone for a night in which they would trail much of the way. Miami got within 49-47 at halftime and led 74-73 after three quarters — then had three turnovers on its first four possessions of the fourth and fell behind yet again.

Chicago held Miami without a field goal for the first 5:55 of the final quarter, forcing five turnovers in that span. The Heat got within one on six different occasions over a six-minute stretch of the final period, before a free throw from Adebayo tied the game at 92-92 with 2:11 left. 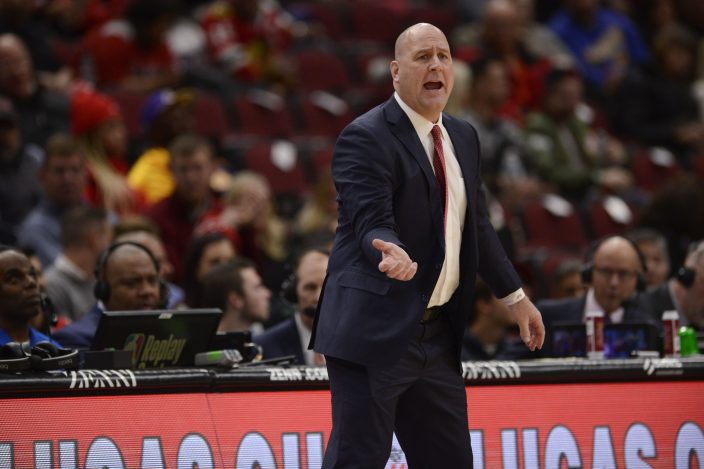 Chicago Bulls head coach Jim Boylen yells to his players during the first half of an NBA basketball game against the Golden State Warriors on Friday, Dec. 6, 2019, in Chicago. Golden State won 100-98. (AP PhotoPaul Beaty)

Bulls: Thaddeus Young, who missed Friday’s loss to Golden State for personal reasons, was back with the Bulls and played off their bench. ... Chandler Hutchison (right shoulder sprain) missed his fifth consecutive game, but is improving. “Every day his shoulder gets less sore, more loose,” Bulls coach Jim Boylen said.

Heat: Goran Dragic (groin), Dion Waiters (illness) and Justise Winslow (back) were unavailable. Waiters has not played this season and Winslow has missed 13 of Miami’s 23 games. ... Adebayo — who’s been listening to pleas from Butler to shoot more 3’s — missed one in the second quarter. He’s now 1 for 7 from deep this season. 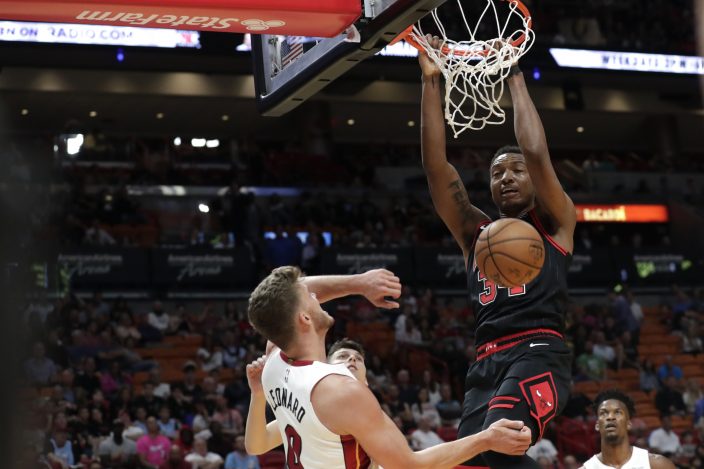 Miami has played 23 times this season and has yet to be beaten in consecutive games. That’s a first in franchise history.

Bulls backup Daniel Gafford committed three fouls in an 83-second span of the first quarter, earning him a quick trip back to the bench. He checked in with 3:53 left, committed his first with 3:35 left, his second with 3:10 left and the third with 2:12 remaining.

Heat: Host Atlanta on Tuesday, the third game in this four-game homestand.

Conor McGregor holds all the UFC cards after comeback w ...

After three years without a victor ...