Dennis Schroder and Shai Gilgeous-Alexander each scored 21 points and the Oklahoma City Thunder opened a four-game trip with a 108-96 victory over the Portland Trail Blazers on Sunday night.

The Thunder, who led by as many as 18 points in the first half, have won four of their last five games, the team's best stretch of the season. Chris Paul finished with 20 points.

Damian Lillard had 26 for the Blazers, who have lost three of four. 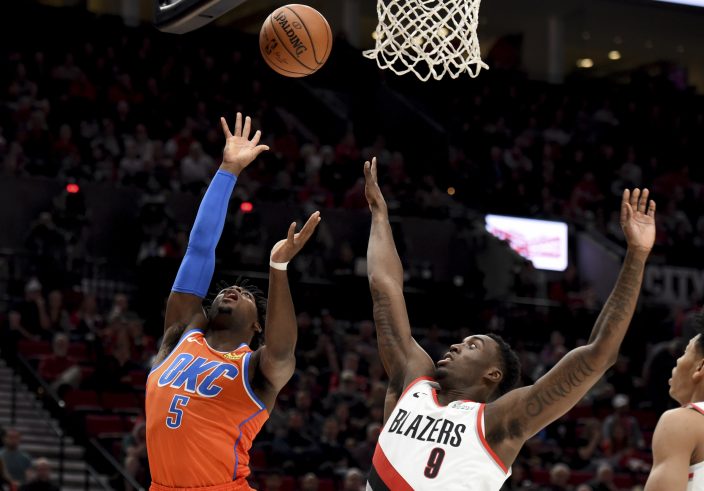 After trailing 55-47 at the break, the Blazers closed the gap in the third quarter and the Thunder held just an 82-78 advantage going into the final period. But Danilo Gallinari's 3-pointer put Oklahoma City up 95-87 with 4:14 left and Moda Center fans started streaming to the exits.

Gilgeous-Alexander hit a 3-pointer and a floater that extended Oklahoma City's margin to 100-89 with 3:13 left and essentially put the game out of reach for the Blazers.

Portland (9-15) was coming off a costly 136-113 loss to the Los Angeles Lakers. Starting forward Rodney Hood tore his Achilles during the first half and will miss the rest of the season. 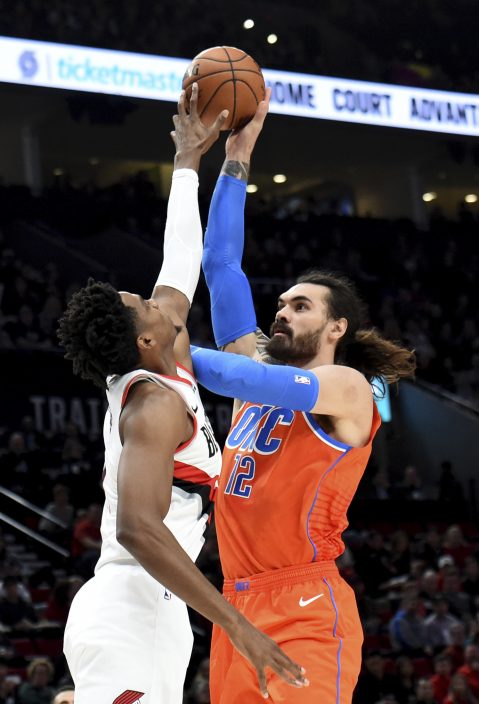 The Blazers had already lost forward Zach Collins to a shoulder injury that required surgery. And center Jusuf Nurkic continues to rehab from a broken leg.

Portland made a move to shore up the frontcourt with the Nov. 19 signing of 10-time All-Star Carmelo Anthony, who hadn't played for more than a year.

Anthony has fit in well with the Blazers, averaging 16.7 points and 5.6 rebounds through his first nine games. But he struggled against the Thunder, going 4 of 18 from the field and finishing with just nine points. 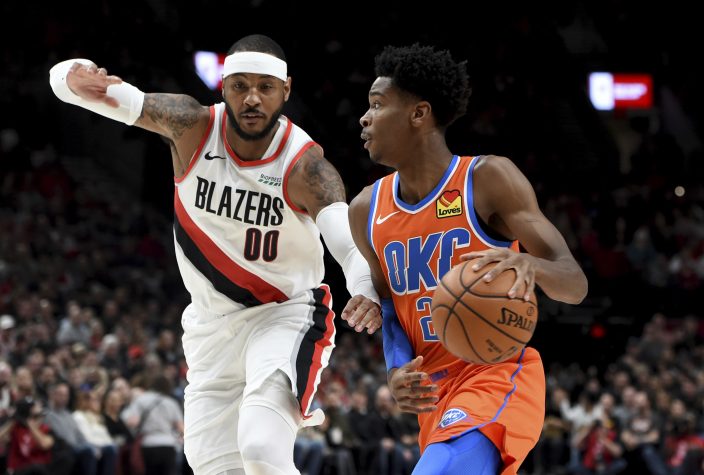 Oklahoma City (10-12) was without Terrance Ferguson because of right hip soreness for the second straight game. Coach Billy Donovan said before the game that he expects Ferguson will miss Monday night's game at the Jazz as well. Abdel Nader started in his place.

The Thunder were coming off a 139-127 overtime victory over the Minnesota Timberwolves on Friday. Oklahoma City forced overtime when Steven Adams threw a length-of-the-court pass that Schroder caught and laid in at the buzzer.

The game got attention because Thunder guard Chris Paul alerted the officials that Minnesota's Jordan Bell had an untucked shirt, which led to a technical foul that helped the trailing Thunder send the game to overtime.

Neither team looked sharp at the start on Sunday. Oklahoma City held a slight 21-20 lead at the end of the first quarter, on 31.8% shooting. Portland shot 27.6% to open the game.

Schroder's pull-up jumper stretched the Thunder's lead to 41-29 midway through the second quarter.

Portland clawed back into it and closed to within 51-47 on Anthony's 3-pointer, which capped a 10-0 Blazers run. But Portland couldn't get closer and trailed 55-47 at the break. Paul led all players with 16 points.

Portland closed within 62-60 on Lillard's 3-pointer in the third quarter. The Blazers eventually pulled in front when Lillard made a trio of free throws, but it was short lived and the Thunder led 82-78 going into the final quarter.

The teams split their first two games earlier this season.

Thunder: In the third quarter a fan dropped a phone on the court and Dennis Schroder picked it up and handed it back. ... It was the first of a four-game trip for Oklahoma City. ... Luguentz Dort fouled out with 4:34 left in the game.

Trail Blazers: Damian Lillard went 0 for 6 from the field to start the game. His first basket was a floater with less than a minute left in the opening quarter. Then he had 16 points in the third quarter alone. ... Hassan Whiteside finished with 14 points and 10 rebounds.

Thunder: Oklahoma City plays the second of a back-to-back Monday night at Utah.