British Prime Minister Boris Johnson and opposition leaders are pushing for the finish line in Britain’s election campaign, dashing through multiple constituencies in the final 72 hours before polling day.

Johnson was touring Labour-held seats across England on Monday that his Conservatives have to win if they are to secure a majority in Thursday’s election. Labour Party leader Jeremy Corbyn was in southwest and central England, where his left-of-center party is trying to hang on to key constituencies.

Opinion polls give Johnson’s Conservatives a lead, but as many as one in five voters remain undecided. This election is especially unpredictable because the question of Brexit cuts across traditional party loyalties 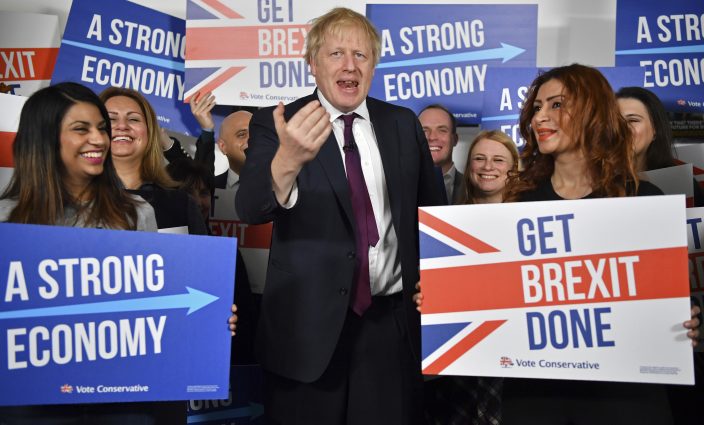 Britain's Prime Minister Boris Johnson, centre, speaks to activists and supporters as he poses for a photograph at the Conservative Campaign Headquarters Call Centre, while on the General Election trail, in central London, Sunday, Dec. 8, 2019. Britain goes to the polls on Dec. 12. (Ben StansallPool Photo via AP)

Visiting a fish market in eastern England on Monday, Johnson said he was “taking nothing for granted.”

The Conservatives had a minority government before the election, and Johnson pushed for the vote, which is taking place more than two years early, in hopes of winning a majority of the 650 House of Commons seats and breaking Britain's political impasse over Brexit. He says that if the Conservatives win a majority, he will get Parliament to ratify his Brexit divorce deal and take the U.K. out of the EU by the current Jan. 31 deadline.

Labour is promising to renegotiate the divorce deal, then give voters the choice in a referendum of leaving the EU on those terms or remaining in the bloc. 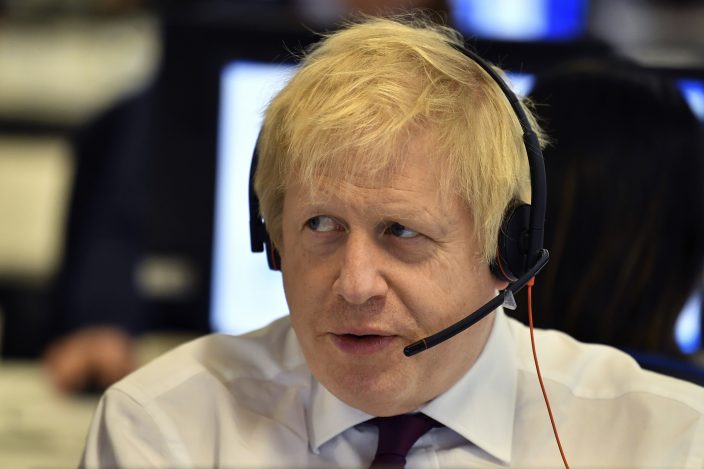 Britain's Prime Minister Boris Johnson, speaks to a caller on the phone, at the Conservative Campaign Headquarters Call Centre, while on the General Election trail, in central London, Sunday, Dec. 8, 2019. Britain goes to the polls on Dec. 12. (Ben StansallPool Photo via AP)