Iran is ready for more prisoner swaps with the United States, the Cabinet spokesman said Monday even as he reiterated the Iranian leadership's stance that there will be no other negotiations between Tehran and Washington.

The remarks by the spokesman, Ali Rabiei, were the first after a prisoner exchange over the weekend saw Iran free a Chinese-American scholar from Princeton who had been held for three years on widely criticized espionage charges.

The scholar, Chinese-American graduate student Xiyue Wang, was freed in exchange for Iranian scientist Massoud Soleimani who had faced a federal trial in Georgia over charges he violated sanctions by trying to have biological material brought to Iran. 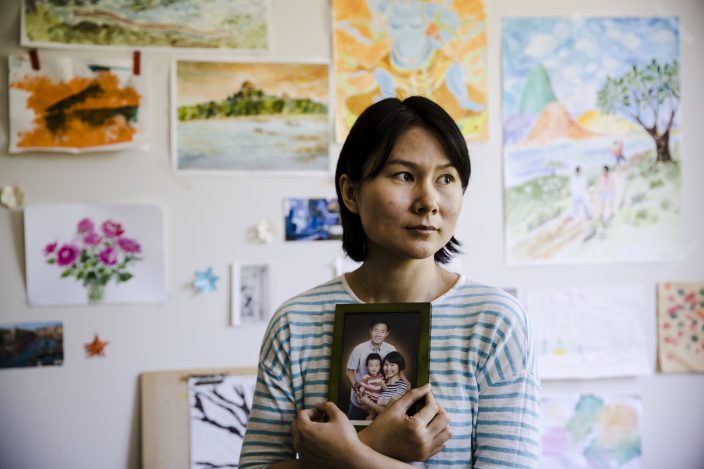 FILE - In this Wednesday, May 9, 2018 file photo, Hua Qu, the wife of detained Chinese-American Xiyue Wang, poses for a photograph with a portrait of her family in Princeton, N.J. Iran's foreign minister says a detained Princeton graduate student will be exchanged for an Iranian scientist held by the U.S. Mohammed Javad Zarif made the announcement on Twitter on Saturday, Dec. 7, 2019. The trade involves graduate student Xiyue Wang and scientist Massoud Soleimani. Wang was sentenced to 10 years in prison in Iran for allegedly “infiltrating” the country and sending confidential material abroad. His family and Princeton strongly denied the claims. (AP PhotoMatt Rourke, File)

“We are ready to cooperate to return all Iranians unlawfully imprisoned in the U.S.,” Rabiei told reporters at a briefing in Tehran. He said however that there will be no other negotiations with the U.S. beside this issue.

Rabiei said any further negotiations would be possible through the so-called 5+1 framework — a reference to the five permanent U.N. Security Council members plus Germany — under the condition that the U.S. first lift sanctions on Iran.

Saturday's exchange was negotiated indirectly and took place in Switzerland, which looks after U.S. interests in Iran as Tehran and Washington have no diplomatic ties. The swap raised hopes of other similar actions and was seen as a rare diplomatic breakthrough between Tehran and Washington after months of tensions. But it was unclear if it would have any effect on Iranian-U.S. relations. 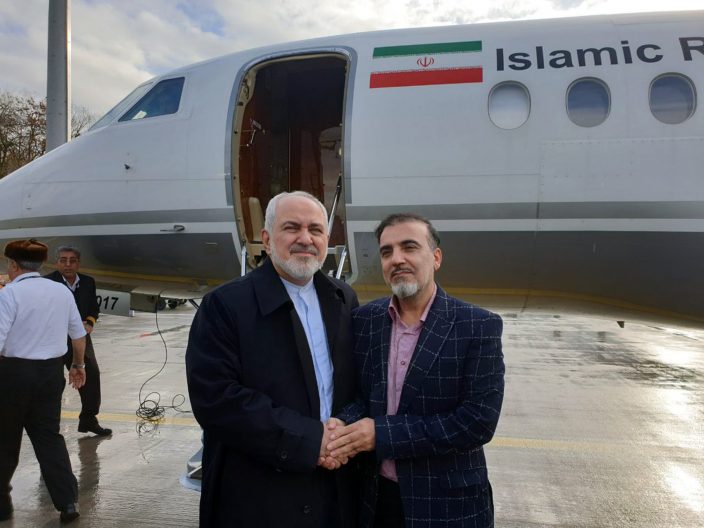 Amnesty International says that over 200 people were killed in the crackdown though Iran has offered no death toll or any other figures related to the unrest.

There are other Western detainees from the U.S. and elsewhere who remain held in Iran and who could be used as bargaining chips for future negotiations. 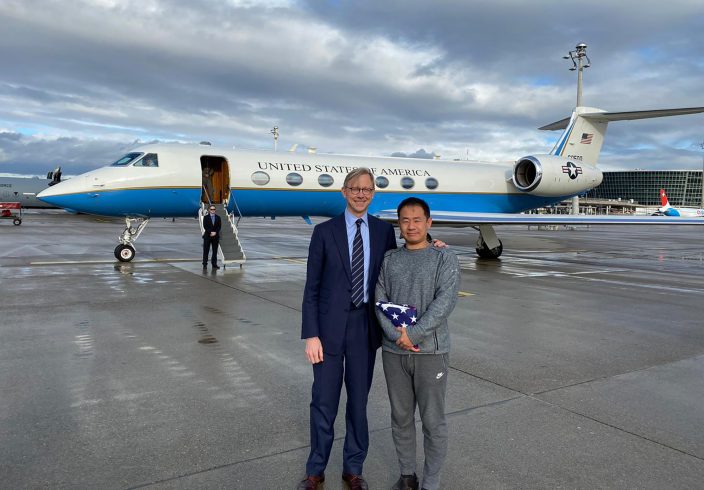 This photo provided by the U.S. State Department, U.S. special representative for Iran, Brian Hook stands with Xiyue Wang in Zurich, Switzerland on Saturday, Dec. 7, 2019. In a trade conducted in Zurich, Iranian officials handed over Chinese-American graduate student Xiyue Wang, detained in Tehran since 2016, for scientist Massoud Soleimani, who had faced a federal trial in Georgia. (U.S. State Department via AP)

Others held in Iran include U.S. Navy veteran Michael White, who is serving a 10-year espionage sentence, as well as environmentalist Morad Tahbaz, an Iranian with U.S. and British citizenship also initially sentenced to 10 years in prison.

Also in Iran are 83-year-old Baquer Namazi and his son, Siamak Namazi, dual Iranian-American nationals facing 10-year sentences after they were convicted of collaborating with a hostile power. Baquer Namazi now is on a prison furlough. However, the Namazis say he remains unable to leave Iran.

Former FBI agent Robert Levinson, who vanished in Iran in 2007 while on an unauthorized CIA mission, remains missing as well. Iran says that Levinson is not in the country and that it has no further information about him, but his family holds Tehran responsible for his disappearance. 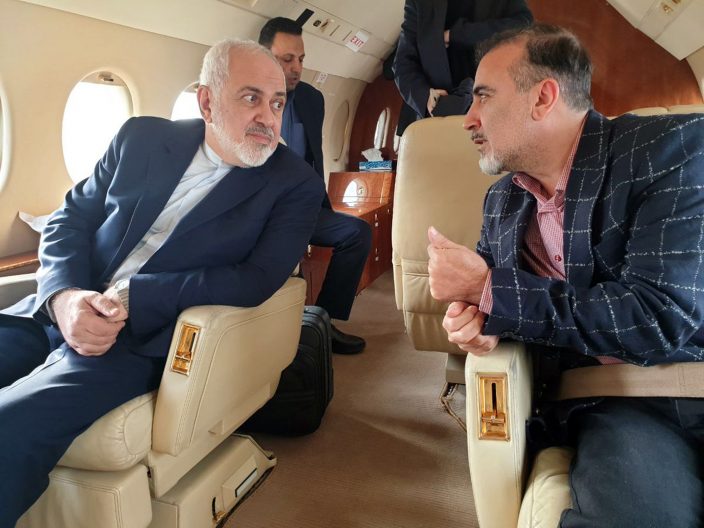 In this photo released on twitter account of Iran's Foreign Minister Mohammad Javad Zarif , Zarif, left, speaks with Iranian scientist Massoud Soleimani onboard a plane while leaving Zurich, Switzerland for Tehran, Iran, Saturday, Dec. 7, 2019. Iran and the U.S. conducted a prisoner exchange Saturday that saw a detained Princeton scholar released for an Iranian scientist held by America, marking a rare diplomatic breakthrough between Tehran and Washington after months of tensions. (Javad Zarif twitter account via AP) 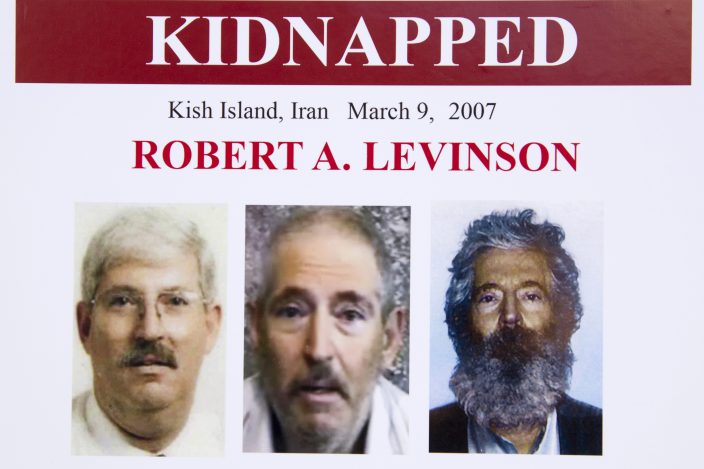 FILE - In this March 6, 2012, file photo, an FBI poster showing a composite image of former FBI agent Robert Levinson, right, of how he would look like now after five years in captivity, and an image, center, taken from the video, released by his kidnappers, and a picture before he was kidnapped, left, displayed during a news conference in Washington. Iran is acknowledging for the first time it has an open case before its Revolutionary Court over the 2007 disappearance of a former FBI agent on an unauthorized CIA mission to the country. In a filing to the United Nations, Iran said the case over Robert Levinson was "on going," without elaborating. The Associated Press obtained the text of the filing Saturday, Nov. 9, 2019. (AP PhotoManuel Balce Ceneta, File)

Iran: Held US grad student to be exchanged for scientist

Iran president: Tehran hasn’t closed window on talks with US

Supreme leader: Iran has outflanked US since 1979 revolution

US-Iran tensions rise ahead of anniversary of deal pullout

Iran's Rouhani urges Iranians to 'put all your curses' on US