The Russian flag and national anthem were banned from the Olympics and other major sports events for four years by the World Anti-Doping Agency on Monday.

Russia's hosting of world championships in Olympic sports also face being stripped after the WADA executive committee approved a full slate of recommended sanctions for tampering with a Moscow laboratory database.

Russian athletes will be allowed to compete in major events only if they are not implicated in positive doping tests or their data was not manipulated, according to the WADA ruling. 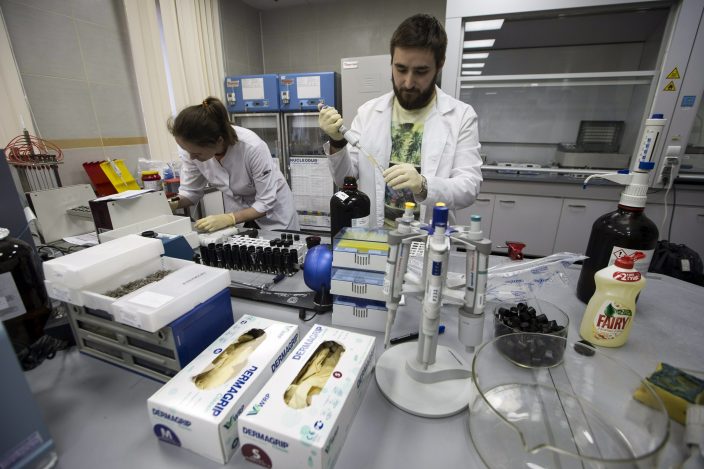 FILE - In this May 24, 2016, file photo, lab technicians work at Russia's national drug-testing laboratory in Moscow, Russia. The Russians were running out of time. Experts from the World Anti-Doping Agency were heading to Moscow to finally receive the trove of data they’d been seeking for two years. Instead of getting ready to hand it over, Russian authorities stayed busy in a round-the-clock endeavor to keep changing, deleting and manipulating the data. Granular details of the plot are sprinkled throughout WADA’s previously confidential 89-page report, obtained by The Associated Press. Among the most brazen projects, the report says, was the rewriting of memos to make it look as though the man who exposed the plot was leveraging the Russian doping scheme to line his own pockets. (AP PhotoAlexander Zemlianichenko, File)

Still, it is unclear how the ruling will affect Russian teams taking part in world championships such as soccer's World Cup.

THIS IS A BREAKING NEWS UPDATE.

The World Anti-Doping Agency began a meeting Monday to judge the latest allegations of Russian corruption in international sports.

There is evidence to show that Russian authorities tampered with a Moscow laboratory database to hide hundreds of potential doping cases and falsely shift the blame onto whistleblowers, WADA investigators and the International Olympic Committee said last month.

Russia will likely again avoid a blanket ban from the Olympics, but the country faces having its flag and anthem banned at next year's Tokyo Games and at other major sporting events for the next four years.

Other four-year sanctions proposed by a WADA panel include excluding Russian athletes from major events unless they are not implicated in the evidence and barring the country from hosting, bidding for, or being awarded championships by world sports bodies.

“Flagrant manipulation” of the Moscow lab data was “an insult to the sporting movement worldwide,” the IOC said last month.

Handing over a clean database to WADA was a key requirement for Russia to help bring closure to a scandal that has tainted the Olympics over the last decade.

Although the IOC has called for the strongest possible sanctions, it wants those sanctions directed at Russian state authorities rather than athletes or Olympic officials.

That position is opposed by most of WADA’s athlete commission. It wants the kind of blanket ban Russia avoided for the 2016 Rio de Janeiro Olympics and the 2018 Pyeongchang Winter Games after a state-run doping program was exposed by media and WADA investigations after Russia hosted the 2014 Olympics in Sochi.

“This entire fiasco created by Russia has cheated far too many athletes of their dreams and rightful careers, for far too long,” the WADA athlete panel said in a statement ahead of the meeting.

Even before WADA’s executive committee met at a hotel in the IOC's home city of Lausanne, Russia signaled it would appeal the ruling.

The appeal would have to be filed by the Russian anti-doping agency, known as RUSADA. It is expected to be declared non-compliant on Monday, 15 months after it was reinstated by WADA in defiance of athlete opposition.

The decision to appeal has been stripped from RUSADA chief executive Yuri Ganus, an independent figure criticizing Russian authorities’ conduct on the doping data issue. Authority was passed to the agency’s supervisory board after an intervention led by the Russian Olympic Committee.

The ROC on Saturday labeled the recommended sanctions as “illogical and inappropriate.”

Some of the strongest criticism has come from Alisher Usmanov, the Russian billionaire businessman and head of the International Fencing Federation who is close to some leading IOC figures.

“The ruthless fight against doping shall not be turned into lynching and the application of new sanctions for the second time for the same doping violation,” he wrote in an open letter to WADA published Sunday.

Russia has stuck to its claim that deceptive edits in the data were in fact made by WADA’s star witness, Grigory Rodchenkov. The former Moscow lab director’s flight into the witness protection program in the United States was the subject of an Oscar-winning documentary.

Technical reasons were claimed — and debunked by WADA investigators — for why the data appeared to have been edited shortly before the delayed handover in January.

Russia gets extra time over track and field doping forgery

Russian boxers to boycott Olympics if sanctions not lifted