The Brazilian teenager started this weekend for the first time in nearly two months, taking full advantage of his chances.

After a long time being overlooked, Vinícius Júnior put in an exciting performance in the team’s 2-0 win over Espanyol on Saturday, being loudly cheered by the Santiago Bernabéu crowd. 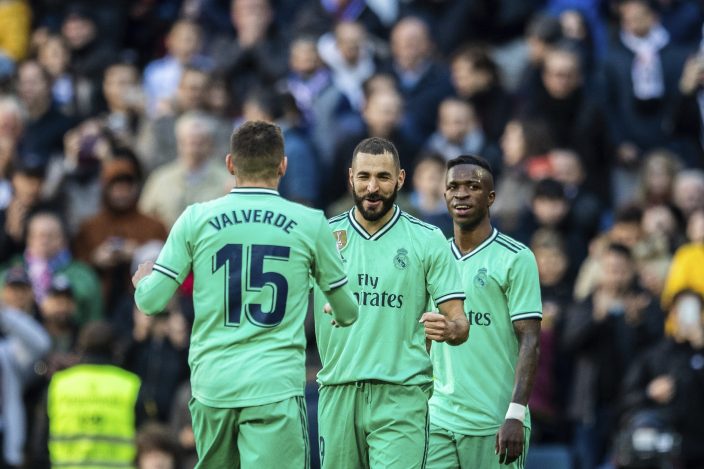 “Vinícius has done very well after not playing for long time, that is important,” Zidane said. “He got his chance and did well. He never stopped working hard.”

Zidane has been trying to keep his entire squad motivated this season, constantly rotating players and not leaving them on the sidelines for too long. He recently recovered Francisco “Isco” Alarcón by making him a starter again following a long period on the bench, and had done the same with other players who did not have many minutes this season.

Vinícius Júnior hadn’t started since the team’s 1-0 loss at Mallorca in the Spanish league in October, coming off the bench only three other times since then. The team’s other Brazilian teenager, Rodrygo, had gained space and was having more opportunities under Zidane recently.

But on Saturday, Vinícius Júnior put his talent on display again, using his nifty moves to get past defenders and create numerous scoring opportunities for his teammates. Rodrygo also played from the start, but it was Vinícius Júnior who attracted all the attention.

Vinícius Júnior's only goal this season came in a league match against Osasuna in September, but Zidane said that’s not something being held against him.

“The important thing is that the player wants to score and is doing his best,” Zidane said. “The goal may come or may not. It will be the result of his good work on the field.”

The chances of Eden Hazard being back in action this year took a hit after he was seeing wearing crutches in the team’s match against Espanyol on Saturday.

Madrid said last week Hazard had a more serious injury than the bruise that was first diagnosed, saying he also was nursing a microfracture that was expected to keep him from playing in the Dec. 18 “clásico” against Barcelona.

The team did not give an official timetable on his return.

Gareth Bale, meanwhile, was practicing with the rest of the squad again after being sidelined for most of last week.

Takefusa Kubo said he understands the jeers from Barcelona fans at the Camp Nou this weekend.

The 18-year-old Japanese forward, who used to play in Barcelona’s academy, heard from the Camp Nou crowd as Mallorca visited the Catalan club on Saturday in Kubo’s first appearance as professional at the stadium since being signed by Barcelona rival Real Madrid and being loaned to Mallorca.

“It’s their decision,” Kubo said. “I made my decision and they have the right to jeer me, I probably deserve it. They see me as a rival now. But there were people applauding as well, and that cheered me up.”

Kubo was Mallorca's best player on Saturday but couldn’t stop the team's 5-2 loss to Barcelona, which got a hat trick by Lionel Messi and goals by Antoine Griezmann and Luis Suárez.

With its triumph over Espanyol on Saturday, Real Madrid became the first team to reach 1,700 Spanish league wins.

The milestone left Madrid more than 50 wins ahead of Barcelona, the closest team on the list. Atlético Madrid was next.

Isco again a protagonist for Real Madrid under coach Zidane

Busquets on Barca bench as Valverde shakes up hierarchy

Pique expresses his anger with Barcelona board

Barcelona still reeling from Anfield collapse back in May