The U.N. General Assembly approved a resolution Monday condemning Russia’s occupation of Crimea and the city of Sebastapol and urging the withdrawal of its military forces “without delay.”

The vote in the 193-member assembly was 63-19 in favor of the measure, with 66 nations abstaining and 45 not voting. It came on the same day the presidents of Ukraine and Russia met in Paris and agreed to revive the peace process on the bloody separatist conflict in eastern Ukraine and exchange all prisoners.

Russia sent troops into Crimea and annexed the peninsula in 2014. It has supported separatist rebels in eastern Ukraine in a five-year war that has killed 14,000 people. Activists watch peace talks in Paris broadcast on a screen at the president's office in Kyiv, Ukraine, Monday, Dec. 9, 2019. A few hundreds of activists wait for the results of peace talks in Paris. Ukraine's President Volodymyr Zelenskiy will have his first face-to-face meeting with Russian President Vladimir Putin to end Moscow-backed conflict in Ukraine's east, which has killed over 14,000 people since 2014.(AP PhotoEfrem Lukatsky)

The resolution expresses the assembly’s “grave concern over the progressive militarization of Crimea by the Russian Federation as the occupying power,” its use of seized Ukrainian military industry enterprises, and the conscription of Crimean residents into the Russian armed forces.

It also expresses the assembly’s “utmost concern about the dangerous increase in tensions and the unjustified use of force by the Russian Federation against Ukraine.”

In addition, the resolution expresses concern at Russia’s actions in parts of the Black Sea surrounding Crimea and in the Sea of Azov and the Kerch Strait. 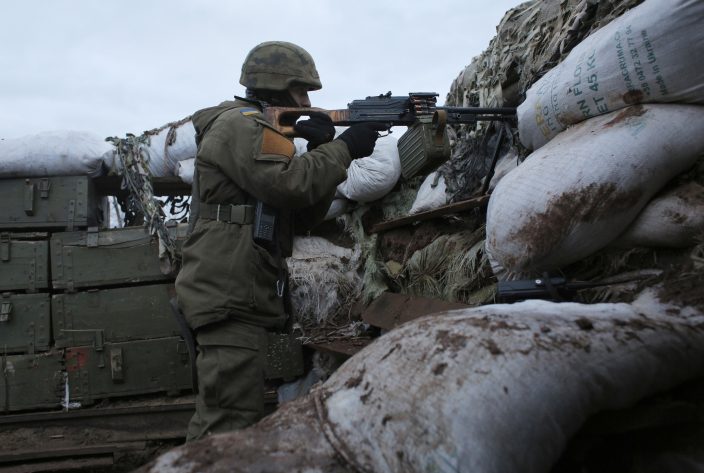 A Ukrainian soldier takes position on the front line at the town of Novoluhanske in the Donetsk region, Ukraine, Sunday, Dec. 8, 2019. A long-awaited summit in Paris on Monday aims to find a way to end the war in eastern Ukraine, a conflict that after five years and 14,000 lives lost has emboldened the Kremlin and reshaped European geopolitics. (AP PhotoVitali Komar)

It welcomes Russia’s release of 24 crew members of three Ukrainian naval vessels it seized last November and encouraged “further negotiations to ensure the release by the Russian Federation of all illegally detained Ukrainian citizens and their safe return to Ukraine.”

The General Assembly in 2014 reaffirmed Ukraine’s sovereignty over Crimea and has adopted resolutions on the problems of the militarization and of human rights in Crimea.

Unlike Security Council resolutions, General Assembly resolutions are not legally binding, though they do reflect world opinion. 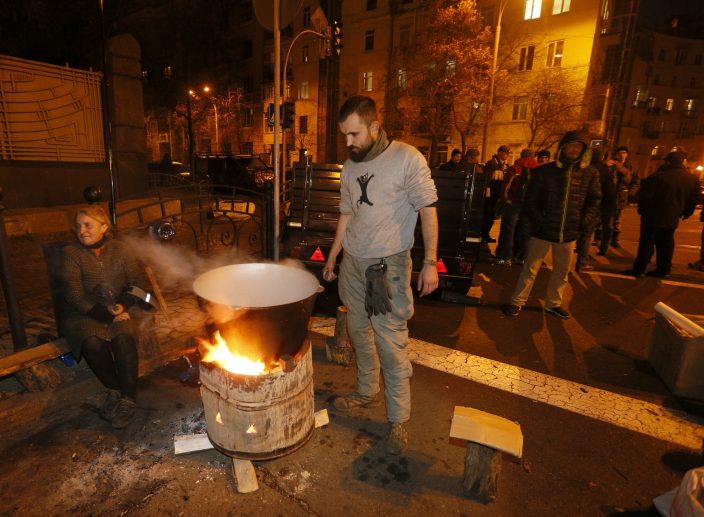 A activist cooks meals during a rally at the president's office in Kyiv, Ukraine, Monday, Dec. 9, 2019. A few hundreds of activists wait for the results of peace talks in Paris. Ukraine's President Volodymyr Zelenskiy will have his first face-to-face meeting with Russian President Vladimir Putin to end Moscow-backed conflict in Ukraine's east, which has killed over 14,000 people since 2014. (AP PhotoEfrem Lukatsky)

Ukraine’s U.N. ambassador, Volodymyr Yelchenko, introduced the resolution, saying Russia’s actions have “far-reaching consequences for security not only in the Black Sea area, but in the whole south Europe, as well as in North Africa and the Middle East.”

In addition to the continuing militarization of the Crimean peninsula, he said, “what is more alarming is that the occupying power is taking steps to nuclearize Crimea, in particular by deploying carriers and other means capable of delivering nuclear weapons, as well as by actively developing nuclear infrastructure on the peninsula.” He stressed that Ukraine is a non-nuclear state and a party to the Nuclear Nonproliferation Treaty.

Yelchenko said the main goal of the resolution is to urge the withdrawal of Russian forces from Crimea and ensure that Russia halts “harassment of commercial vessels and restrictions to international shipping in the Black Sea and the Sea of Azov.”

Russia’s deputy ambassador, Dmitry Polyansky, called the resolution “a politicized and provocative text that is based on allegations, speculations and distortions of facts.”

“People of Crimea have long made their choice. Exposed to a threat of a `blood-drenched massacre’ that was coming from nationalists who came to power in 2014, they decided to reunify with Russia,” he said.

Speaking before the vote, Polyansky said the resolution “is based on a bare-faced lie and assertions that things look bad for Crimeans, that they are languishing against the Russian annexation and occupation.” He invited diplomats to visit Crimea and see for themselves.

He accused Ukraine of trying “to impair the constructive course of the Paris meeting” Monday between Ukrainian President Volodymyr Zelenskiy and Russian President Vladimir Putin.

In urging a “no” vote, Polyansky said that what Zelenskiy told Russia in preparing for the meeting “is absolutely incompatible” with the resolution.