Another border tunnel from Mexico to the United States has been discovered in Arizona after the U.S. Border Patrol arrested four migrants.

Agents in Nogales, Arizona, found the tunnel on Sunday after a camera operator for the Border Patrol spotted the migrants.

The agents who made the arrest traced the migrants' trip and came across the tunnel from Nogales, Mexico to Nogales, Arizona. 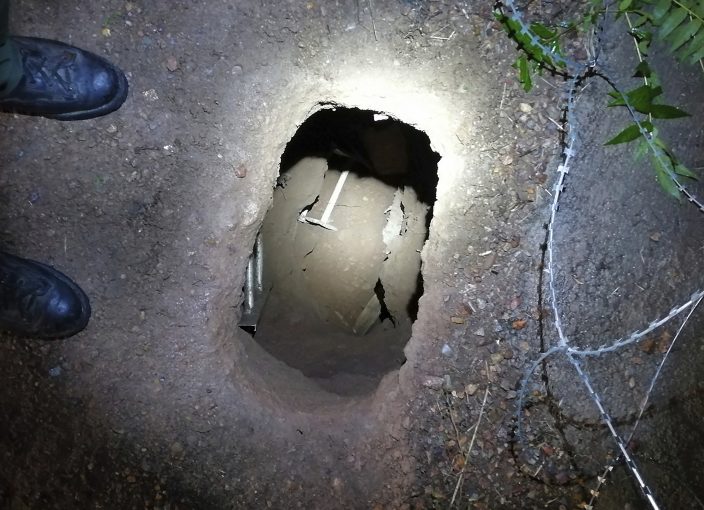 This Dec. 9, 2019 photo provided by U.S. Customs and Border Protection (CBP) shows an access point to a tunnel between Nogales, Mexico, and Nogales, Ariz., seen from the U.S. side. The CBP says it busted another cross-border tunnel after arresting a group of four migrants. The agency says agents in Nogales, Ariz., made the discovery on Sunday, Dec. 8, after a camera operator spotted the migrants. It was just 50 yards (45.7 meters) east of another tunnel that was discovered last week, although that one was incomplete. The Border Patrol says it worked with Mexican authorities to trace the tunnel to Mexico and that it has since destroyed it. (CBP via AP)

It was just 50 yards (46 meters) away from another tunnel discovered last week, although that one was incomplete. The Border Patrol said it worked with Mexican authorities to trace the tunnel to Mexico and has since destroyed it.

It was the fifth tunnel discovered this year in the Border Patrol's Tucson Sector, which covers large areas of Arizona.