Relentless in its pursuit of an elusive Premier League title, Liverpool is also still in the hunt for yet another Champions League trophy.

The English team stayed on course in its defense of the biggest prize in European soccer by beating Salzburg 2-0 on Wednesday to qualify for the last 16 as Group E winner.

Napoli joined the Reds in advancing from the group by thrashing Genk 4-0 thanks to a couple of gifts from the youngest goalkeeper to ever play in the Champions League. Both Liverpool and Napoli knew victories in their final group matches would see them progress. While it was a procession for Napoli, Liverpool found it much tougher. 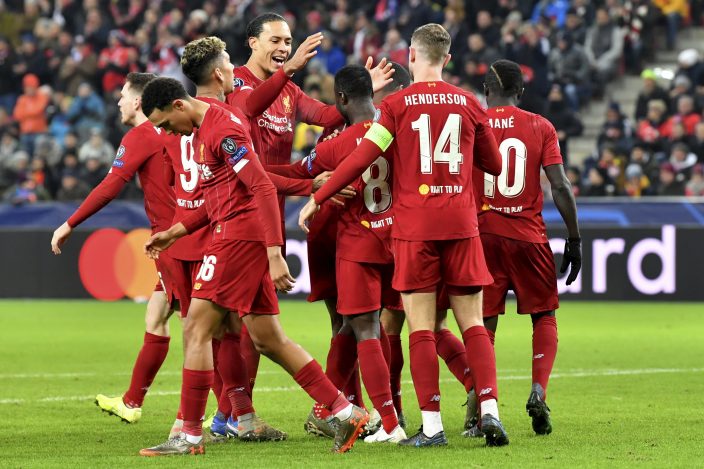 Jurgen Klopp's team survived some early scares against Salzburg before scoring two goals in as many minutes from the 57th, through Naby Keita — against the club for whom he played from 2014-16 — and Mohamed Salah.

Salah's goal was exquisite, the Egypt forward breaking the offside trap to round the goalkeeper and score from an acute on the right with his weaker right foot.

Liverpool — which leads the Premier League by eight points — also left it to the final group game last season before advancing in the Champions League. It was Salah who scored the crucial goal then in a 1-0 win over Napoli to eliminate the Italian team.

Napoli didn't waste its chance 12 months later, although the win over Genk proved to be unnecessary in light of third-place Salzburg's loss in Austria in a match taking place at the same time.

It was a tough Champions League debut for Maarten Vandevoordt, who became the youngest goalkeeper ever in the competition — at 17 years, nine months and 10 days — only to give away the first goal in the third minute after being tackled inside his own six-yard box as he tried to go round a Napoli player.

Arkadiusz Milik converted into an empty net for the first of his three goals before halftime. The third came from a penalty, given away by Vandevoordt. Dries Mertens added another penalty in the 74th minute.

There are four other last-16 berths up for grabs in the late games Tuesday as Groups F, G and H draw to a conclusion.

Lionel Messi and Liverpool shine in the Champions League