For the House progressives: a pair of impeachment articles against President Donald Trump. For the vulnerable Democratic freshmen: charges that are narrowly focused on Ukraine. And for the whole House Democratic majority — and, however backhandedly, Trump himself: a sweeping new trade deal.

In the span of 90 minutes Tuesday, Pelosi unveiled historic legislation in back-to-back press conferences designed to keep her restive Democratic caucus unified long enough to impeach the nation's 45th president. The double shot reflected her “two-track” strategy of legislating while investigating, and the recognition that Americans want Democrats to deliver on pocketbook matters like trade and health care.

“Great!” the president tweeted of the trade accord, even as he denounced the impeachment drive. 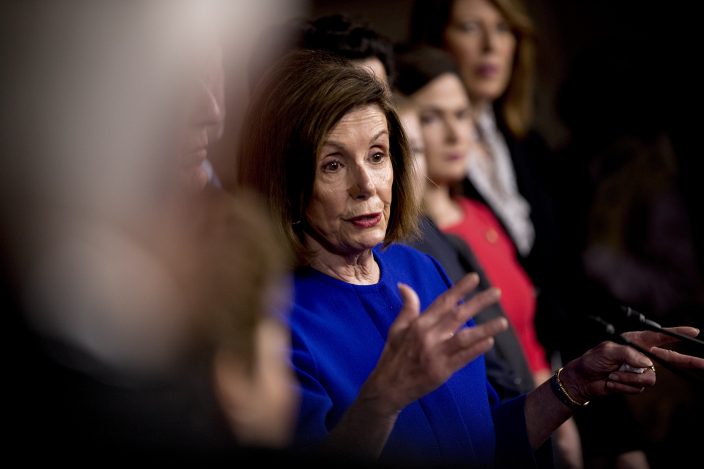 But the approach also allowed Pelosi, in her second turn as speaker, to undercut the president's claim that she is incapable of passing trade legislation because she's out to get him.

“We ate their lunch — oh, excuse me,” she told Democrats behind closed doors.

In some ways, the moment was the bookend to Pelosi's face-to-face clap-and-smirk at Trump's State of the Union speech Feb. 5, an address she only allowed because he had retreated in a funding fight and reopened the government. 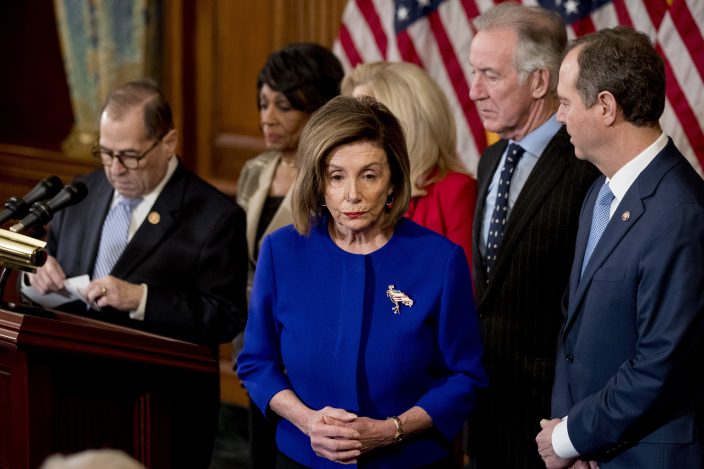 This time, too, Pelosi gave the president something he could see as validating — the House's version of his U.S.-Mexico-Canada Agreement, updating the original North American Free Trade Agreement. Meanwhile, she delivered the smackdown of the charges, putting Trump on track to become only the third impeached president in history.

“The day is young," she observed during her second press conference.

Pelosi and other Democratic leaders insisted the timing of the trade announcement was more about the looming holiday recess, which tends to focus Congress, but there was no denying the effect of the move.

“I hope it’ll prove to the American people that we are doing the walking and chewing gum and flossing and doing it all at once," said Rep. Madeleine Dean, D-Pa.

There was more on the policy front. The House is heading toward approving a defense bill with an expansion of paid leave for federal workers. And they're making progress on legislation to lower the cost of prescription drugs, a goal Trump also has prioritized.

Yet there is much about Tuesday's developments that hasn't gone Pelosi's way. Until the Ukraine scandal broke at the end of the summer, Pelosi insisted there would be no impeachment without bipartisan public support.

But she agreed to launch impeachment proceedings after Trump's July 25 phone call with Ukraine's president revealed he had asked for the “favor” of an investigation into Joe Biden. More than two months later, that overwhelming public sentiment still isn't there: House Republicans remain unified against Trump's impeachment on a variety of grounds, and polls show the public remains deeply split, along partisan lines, on whether to impeach him.

Meanwhile, the Republican-held Senate remains virtually certain to acquit Trump, rather than summon the 67 votes required to convict and remove him from office. Nor will there will be quick action on the trade deal in the Senate, where the matter won't be considered until next year.

There was early evidence that Pelosi's one-two move didn't go down easily with some of her members.

“I don't love it,” Rep. Alexandria Ocasio-Cortez, D-N.Y., a progressive, said of Pelosi's strategy. She said she'll be voting for the articles of impeachment but wishes they covered more of Trump's conduct. “I understand the caucus is where it’s at and it took so long just for us to get to this point, that I’m glad that we have two.”

Rep. Elissa Slotkin of Michigan, one of the freshmen Democrats with national security backgrounds who backed an inquiry into Ukraine, wasn't saying Tuesday whether she'd take the next step and vote for the articles. But she was thrilled about the trade deal.

“In Michigan, we can’t stand NAFTA. USMCA is markedly better,” she said. “Every event that I went to, especially (in) the business community, they were pushing me on USMCA.”

Trump weighed in later, saying Democrats were “embarrassed” by the “very weak” articles of impeachment.

“That’s why they brought up USMCA an hour after,” he claimed to reporters before leaving the White House for a campaign rally in Pennsylvania. “They wanted to muffle down impeachment.”

Democrats have widely said the investigation showed that Trump pressured Ukraine to investigate a political rival for his own gain, all the while holding up military aid to the U.S. ally on the border of Russia. But there remained some sensitivity to ticking off voters in Trump-leaning districts.

Asked whether Democrats want to avoid having impeachment be the last vote before the holiday recess, House Majority Leader Steny Hoyer replied, “That would be preferable.”

The Federal Reserve kept its bench ...