A New Zealand island volcano vented more steam and mud Wednesday in an increase of geothermal activity that again delayed the recovery of victims' bodies from a deadly eruption two days ago.

Volcanic tremors on White Island rose in the morning, accompanied by releases of more steam and mud, the GeoNet seismic monitoring agency said.

“We interpret these signals as evidence of continued high gas pressures within the volcano," the agency said. “The situation remains highly uncertain as to future activity. Eruptions in the next 24 hours are still likely to occur.” 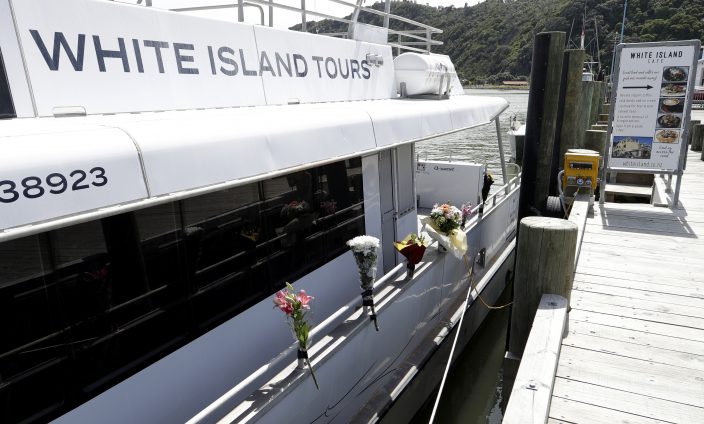 Bouquets of flowers sit on one of the two tour boats that went to White Island on Dec. 9 in Whakatane, New Zealand, Wednesday, Dec. 11, 2019. Survivors of a powerful volcanic eruption in New Zealand on Monday Dec. 9 ran into the sea to escape the scalding steam and ash and emerged covered in burns, say those who first helped them.(AP PhotoMark Baker)

Six deaths have been confirmed in Monday's eruption, which sent a tower of steam and ash an estimated 12,000 feet (3,660 meters) into the air. The bodies of eight other people are believed to remain on the ash-covered island. And 30 people remain hospitalized, including 25 in critical condition. Many of the injured suffered severe burns.

Bruce Bird, an acting assistant police commissioner, said they were monitoring the situation hour by hour.

“Safety for our staff is a huge priority for us,” Bird said. “And we've got to get this right.”

Bird said a drone was deployed over the island to measure gas levels after strong winds had thwarted those attempts on Tuesday.

But helicopter pilot Mark Law said the delay was hard to understand and that if he was making the decision, he would leave immediately.

“It would take 20 minutes to get out there. We know where they are," he said, referring to the bodies. “Then we could bring them home.”

Police believe 47 visitors were on the island at the time, 24 of them Australian, nine Americans, five New Zealanders and others from Germany, Britain, China and Malaysia. Many were passengers aboard the Royal Caribbean cruise ship Ovation of the Seas.

Survivors ran into the sea to escape the scalding steam and ash and emerged covered in burns, said those who first helped them. Geoff Hopkins watched the eruption from a boat after visiting the island and told the New Zealand Herald the eruption quickly turned menacing.

He told the paper that injured people transported on their boat were horrifically burned on their exposed skin and even under their clothes.

The first confirmed death was of a local man, Hayden Marshall-Inman, a guide who had shown tourists around the island. Former Whakatane Mayor Tony Bonne said Marshall-Inman was a keen fisherman and well-liked.

White Island, also known by the indigenous Maori name Whakaari, is the tip of an undersea volcano about 50 kilometers (30 kilometers) off New Zealand's main North Island. Whether it will ever host tourists again remains uncertain.

In the town of Whakatane, which road signs tout as the gateway to White Island, the volcano has an almost mystical significance, its regular puffing a feature of the landscape.

Many people were questioning why tourists were allowed to visit the island after seismic monitoring experts raised the volcano's alert level last month.

“These questions must be asked, and they must be answered,” Prime Minister Jacinda Ardern said in Parliament.

Police said in a statement they would investigate the deaths on behalf of the coroner, accompanying an investigation by health and safety regulators, but they said it was too early confirm whether there will also be a criminal investigation.

The island had been mined for sulfur until a 1914 accident in which at least 10 people were killed, and a landslide destroyed the miners' village and the mine itself. The island became a private scenic reserve in 1953.

Daily tours allow more than 10,000 people to visit every year.

“Tourism has been a growing market, and White Island has been an anchor for that,” Bonne said. “It's something unique that pulls people from all around the world."

He said it was sad to think that might all now come to a stop.

No escape: Senators to be quiet, unplugged for Trump tr ...

No cellphones. No talking. No esca ...